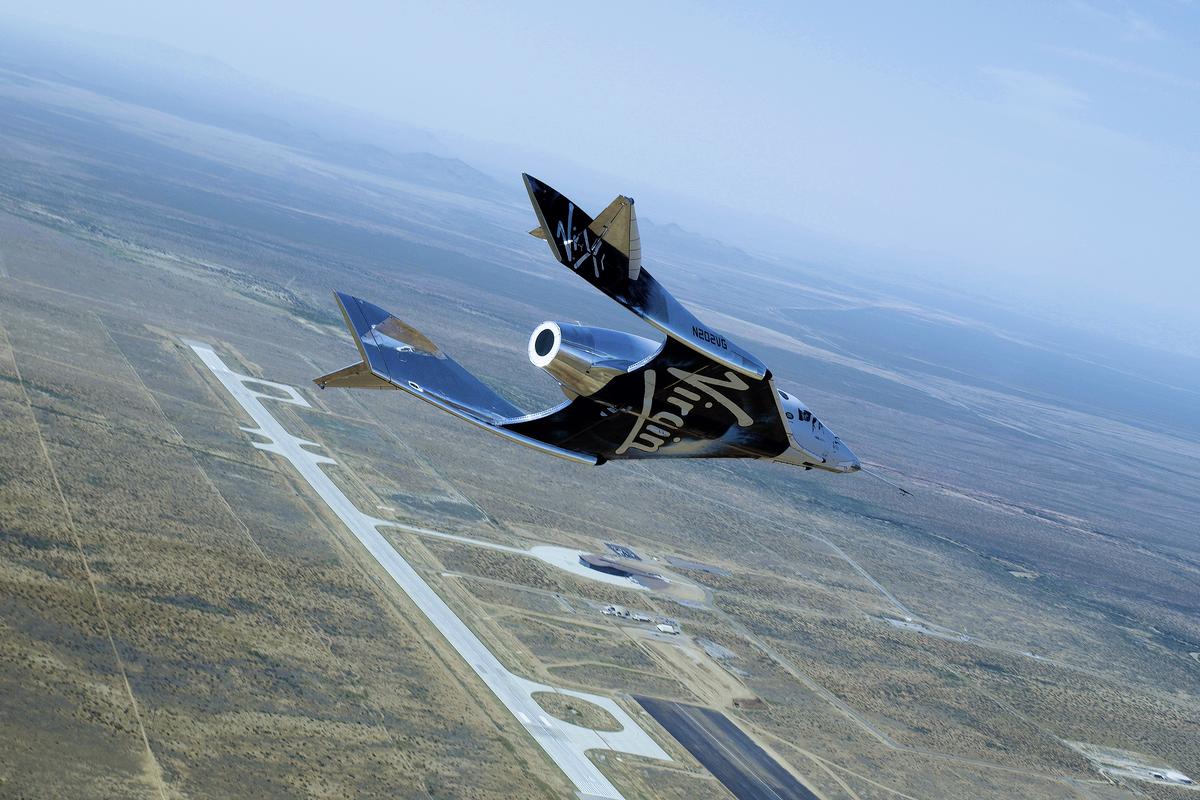 Virgin Galactic’s spaceplane glides over New Mexico.  Virgin Galactic
By Nick Lavars
Virgin Galactic continues to make itself at home in New Mexico, today completing the second successful glide test of its VSS Unity spaceplane since relocating there earlier in the year. The unpowered flight went off without a hitch and saw the spacecraft hit new speeds, as the company presses ahead with its testing program at Spaceport America.

After using its VMS Eve mothership to carry the VSS Unity spaceplane across a three-hour journey from its manufacturing facility in Mojave, California, Virgin Galactic set up shop at Spaceport America back in February. The new headquarters will serve as the base for the final phase of the company’s flight test program, and ultimately its commercial operations once the practice runs are complete.

Though the VSS Unity has completed rocket-powered test flights and hit supersonic speeds to reach space before, the company is now acquainting itself and the spaceplane with the airspace over New Mexico.

This new round of test flights kicked off with the first outing of the VSS Unity on May 1, when the spaceplane was carried into the air by VMS Eve and released at an altitude of 50,000 ft (15,200 m) to hit a glide speed of Mach 0.70. The latest fight saw the spacecraft again released by VMS Eve in its glide configuration, but this time at an altitude of 51,000 ft (15,500 m), and it reached a speed of Mach 0.85.

The spacecraft was also made to perform a series of in-flight maneuvers, designed to test out its handling performance, with the data gathered throughout to help with aerodynamic modeling. From here, the team will start preparing for rocket-powered flights as it eyes commercial flights to space further down the track.

“I am thrilled with the team’s hard work to complete today’s test flight successfully,” says George Whitesides, CEO of Virgin Galactic. “It was an important test that, pending data review, means we can now start preparing the vehicles for powered flight. Our focus for this year remains unchanged on ensuring the vehicles and our operations are prepared for long-term, regular commercial spaceflight service.”

The video below provides an overview of the test flight.

Nick Lavars
Nick has been writing and editing at New Atlas for over six years, where he has covered everything from distant space probes to self-driving cars to oddball animal science. He previously spent time at The Conversation, Mashable and The Santiago Times, earning a Masters degree in communications from Melbourne’s RMIT University along the way.
–
–
(For the source of this, and many other equally interesting articles, please visit: https://newatlas.com/space/virgin-galactic-glide-testing-spaceport-america/)
Tweet