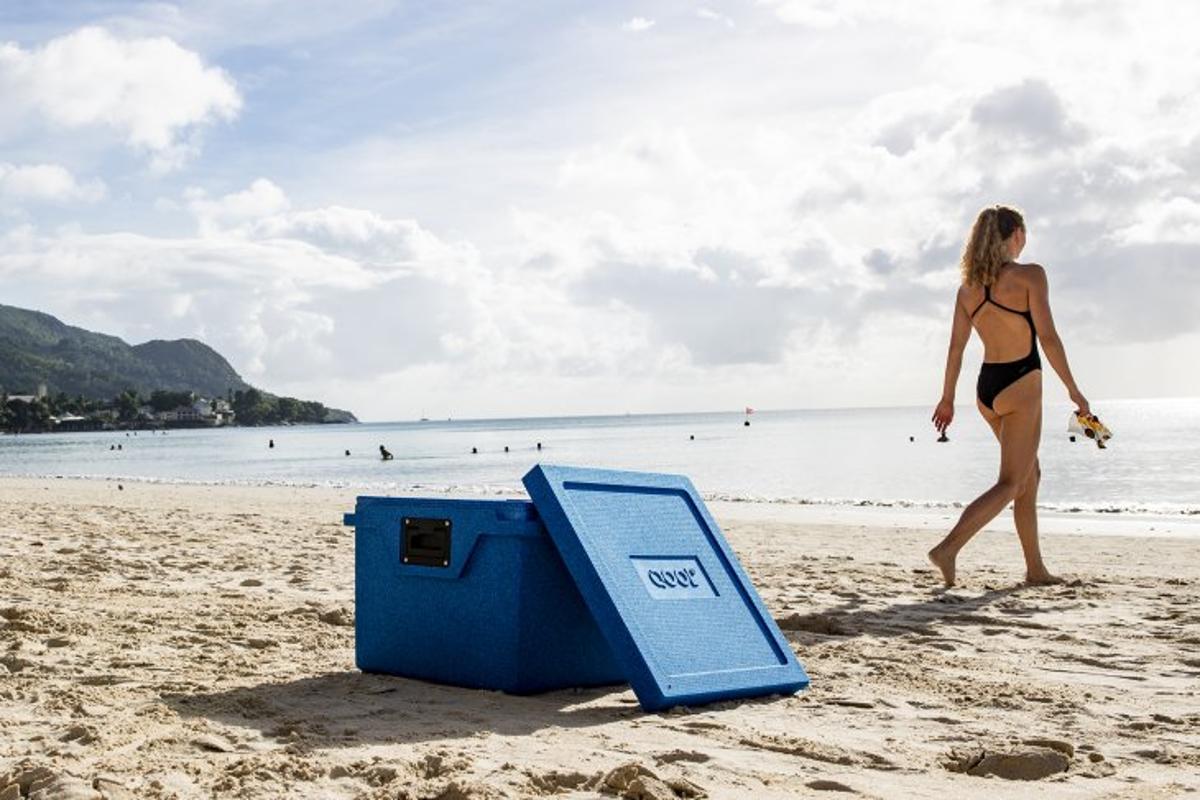 Qool’s system is designed to keep contents at a given temperature range no matter the ambient temp, whether tropical heat or polar cold.  Qool
–
By C.C. Weiss

Unlike the typical cooler – even those expensive, heavy-duty rotomolded blocks – the Qool Box relies on vacuum insulation, much like a thermos or hot/cold tumbler. Its upgraded cooling tech doesn’t stop there, as Qool ditches bagged ice for frozen inserts containing special phase change material (PCM) formulated to keep contents cold (or even frozen) for days, without the melting or mess. Long story short, this passive but intelligent cooler doesn’t just threaten to knock off other coolers on its way to the top, it could even replace powered fridge/freezers for shorter trips and events.

Yeti made headlines for introducing the “first-ever” vacuum-insulated cooler in November 2019 when it revealed the steel-skinned V Series. But the Qool Box was already out there by that point, in Germany and environs, at least, winning awards like the ISPO Gold it took home in January 2019.

Collectibles
Space suit from “2001: A Space Odyssey” could break records at auction

Qool is a spinoff of Vac-Q-Tec, a German-based international supplier of commercial-grade insulation for various industrial and business applications. Vac-Q-Tec’s products include insulated packaging for keeping sensitive medication and healthcare supplies at proper temperatures during transport. As such, its technology goes beyond just keeping a tub of beer cold enough to drink on a summer day and is instead designed to keep products within precise temperature ranges.

With Qool, Vac-Q-Tec brings that advanced temperature regulation tech to the consumer cooler market, offering a cooler that doesn’t just keep food and drink chilled in an ice bath for a couple days or week+ but keeps it within a desired temperature range, right down to frozen below -15 °C (5 °F). The two-part design starts with ground-up vacuum-insulated construction – the Qool Box’s walls, lid and floor are all made using vacuum insulation panels, rather than the cheaper solutions typically used in coolers, such as foam.

Just throwing ice cubes or water-filled ice packs into a vacuum-insulated box should keep food cool longer than other coolers, but it won’t keep food frozen well below 0 °C (32 °F) or medicine at precise temperatures. For that, Qool packages its cooler with Temperature Elements, sealed blocks filled with phase change material more complex than water-based ice.

Qool’s PCMs release a steady stream of cooling energy as they melt from solid to liquid, keeping the cooler interior at a consistent temperature range for up to 10 days. The user simply freezes the elements in a home freezer for one to three days, depending upon version, and then places them on the sides and top of the cooler interior.

Rather than just sell a standard set of Temperature Elements for keeping the cooler at “average picnic temperature,” Qool takes it further by offering five sets of elements for specific temperature ranges, from a warmer range of 18 to 25 °C (54 to 77 °F) for certain red wines, right down to a “deep freeze” between -25 and -15 °C (-13 and 5 °F). We’re guessing the average camper or tailgater would be looking for the -2 to 2 °C (28 to 36 °F) “standard cool” version for meat or fish, or the 2 to 8 °C (36 to 46 °F) “controlled fresh” for less sensitive food and drink. Lastly, there’s a -20 to -10 °C (-4 to 14 °F) “standard freeze” that Qool says is perfect for ice cream. The lid helps maintain the interior temperature by creating a thermal seal, and Qool says its system works in any climate.

Qool also tested the ice retention capabilities of its coolers without the Temperature Elements. During two separate outdoor tests, the large 43-L Qool Box retained some ice until the 19th and 27th day, respectively, when it all melted to water. The medium 27-L Qool Box lasted 17 days during its single test. You can read more about these tests and watch the videos toward the bottom of Qool’s “Technology” page.

Beyond its high-tech insulation and cooling, the Qool Box looks like a solid, cleanly designed cooler. It carries up to 154 lb (70 kg) and relies on low-profile handles that fold flush when not in use. Qool makes no mention of the very in-vogue certified bear resistance, and there doesn’t appear to be any lock points on its coolers, but the Qool Box is built to hold up to lesser external threats, with Qool going so far as to say it’ll last 50 years when treated with care. The Qool Box can also support up to 330 lb (150 kg) on top, so works perfectly as a stepping stool at camp. An impact-dampening outer shell protects against drops and impacts.

Those prices run well higher than already-expensive rotomolded coolers of comparable size but well less than Yeti’s $800 V Series vacuum-insulated cooler, which offers 44 liters of internal volume and weighs 35 lb (16 kg) empty. The large Qool Box weighs in just under half the Yeti V, at 17 lb (7.7 kg), while offering 43 liters of internal volume.

Sadly, the Qool Boxes aren’t going head to head with the V Series in the US, as Qool currently only ships in Germany and Austria and lists one physical retailer outside those countries, in Switzerland. Vac-Q-Tec does have a North American HQ in Pennsylvania, so perhaps it will bring the Qool lineup to American shores in the future. It could certainly count on a booming market of American campers, RVers, overlanders, adventurers and other outdoor enthusiasts who’d be willing to take a look at an interesting cooler alternative.

Chris joined the New Atlas team in 2011 and now serves as the automotive and campers editor, traveling extensively to gather the latest news on cars, outdoor sports gear and other innovations designed to help people experience and enjoy the greater world around them.
–
–
(For the source of this, and many other equally interesting articles, please visit: https://newatlas.com/outdoors/qool-box-vacuum-insulated-cooler/)