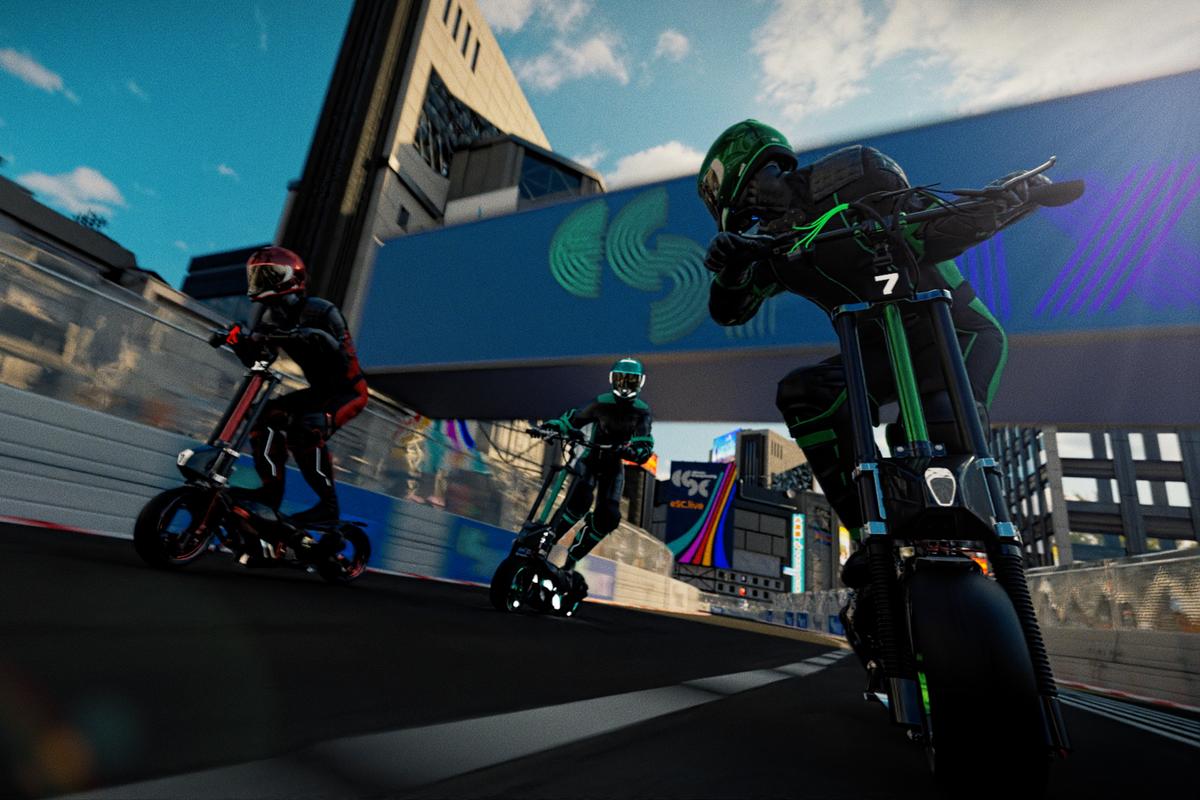 Highway-speed electric kick scoots going flat knacker around a racetrack? You’re damned right we’d like to see that!  eSkootr Championship
–
By Loz Blain
Leather-clad riders eyeing each other off at the starting line. Fifteen-inch weeny tires chirping as the flag drops, silent electric kick scoots accelerating to a frenetic 100 km/h (62 mph) on the straights, then doing whatever the hell it takes to get one of those things slowed down and around the bends at race pace. This is going to be nuts.

Did anyone ask for electric scooter racing? Good lord, no. Are we kinda fired up for it? Yes. Yes we are. One of the things that makes motorcycle racing so much more of a human spectacle than car racing is the fact that you can see the rider’s body language throughout the race. Applying the same theory to an even smaller vehicle would suggest to us that anger, fear, frustration and the all-important “pucker factor” will be on full display when the eSkootr Championship (eSC) kicks off.

It’s natural enough; when you put wheels and motors on things, people will want to race them. And with portable electric mobility devices becoming all but ubiquitous in modern cities, perhaps it was only a matter of time.

The eSC team says this is all about super-accessible racing, and it seems to us that’s fair; a set of leathers, helmet and fully juiced up race scoot are going to be far, far cheaper than any race bike or car setup, and they’ll be much cheaper to transport around the place as the eSkootr championship makes its way around the globe to “a series of specially designed urban venues in some of the world’s most cosmopolitan and progressive cities.”

A “recognized high-technology provider” has been signed up to spec out and build the first race scoots, with prototypes to be revealed later this year. One obvious candidate would probably be Rion, whose Rion2 RE90 Racing Edition scoot is already equipped with dual motors, a full carbon body, pole and handlebar. That thing, says Rion, is capable of 160 km/h (100 mph) and limited to 130 km/h (80 mph). You can buy one of these beasties straight up for US$6,800.

There are some pretty serious cats running the eSC business, with Formula One driver Alex Wurz, Formula E driver Lucas Di Grassi and A1GP driver Khalil Beschir on board, and entrepreneur Hrag Sarkissian acting as CEO.

Racers, the team says, could come from pretty much anywhere, including car and motorcycle racers, cyclists, skaters, snowboarders and (rather optimistically) e-racers. This is going to be a highly physical sport, we’d imagine, with body position playing an even bigger role in dropping lap times than it does in motorcycle racing. One can envisage some pretty extreme cornering techniques coming out of this.

The eSkootr team also believes that like any good race series, it’ll partially be about developing technologies. Mind you it’s tough to see where a freeway-speed kick scooter is going to find relevance in the micromobility mix.

Racing is set to kick off in 2021, and we’re keen to see what that looks like. If it struggles to attract viewers, a simple rule change allowing full contact punches, kicks and shoulder charges could be just the ticket. Check out a cheesy render video below, to go with these cheesy render pics.

Loz Blain
Loz has been one of our most versatile contributors since 2007. Joining the team as a motorcycle specialist, he has since covered everything from medical technology to aeronautics, music gear and historical artefacts. Since 2010 he’s branched out into photography, video and audio production.

–
–
(For the source of this, and many other equally crazy articles, please visit: https://newatlas.com/urban-transport/international-eskootr-championship/)