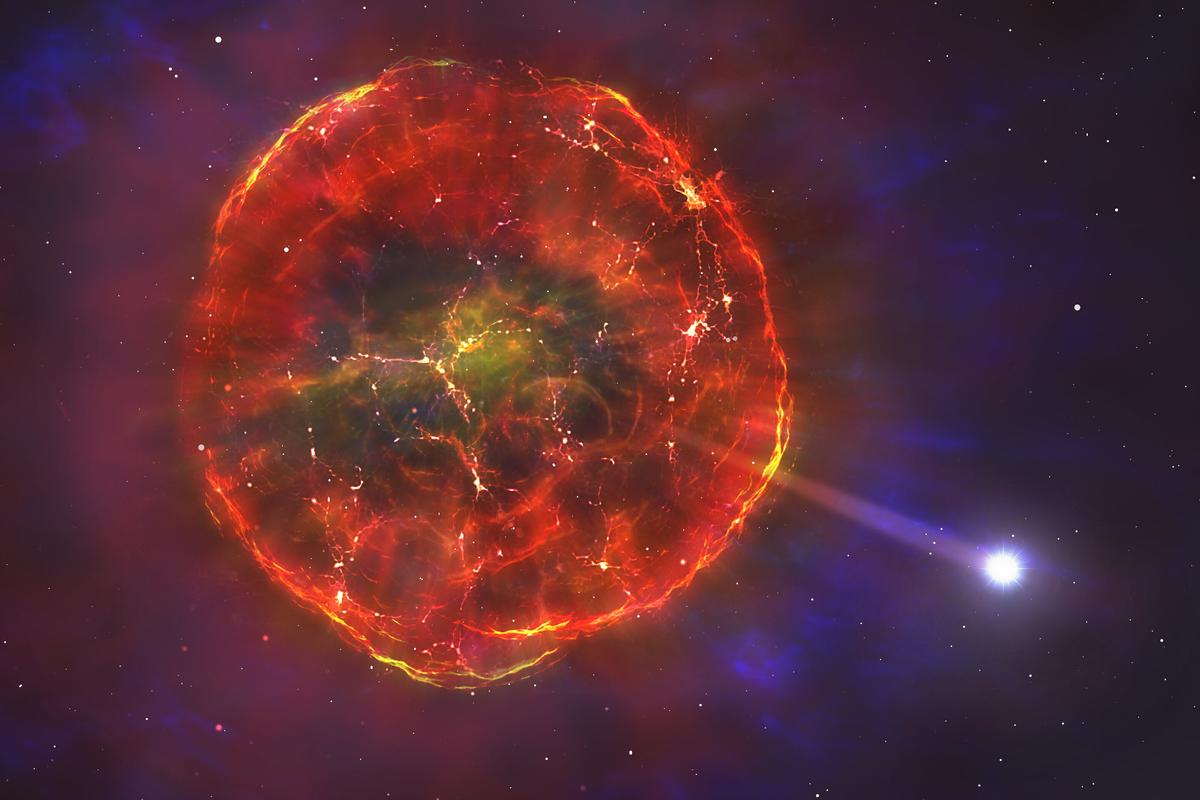 An artist’s rendering of a supernova kicking a white dwarf star into high speed, rather than destroying it.  University of Warwick/Mark Garlick
–
By Michael Irving
A supernova may seem like a pretty final fate, but now astronomers have discovered a star that apparently survived this explosive process. It wasn’t without consequence, however – the star was kicked out of a tight binary orbit and flung across the galaxy.

The star in question is a white dwarf called SDSS J1240+6710, which was discovered in 2015. At the time, astronomers noted that the object had an unusual composition. While white dwarfs typically have atmospheres made mostly of hydrogen and helium, this one had neither – instead it was made up of an odd combination of oxygen, neon, magnesium and silicon.

On closer inspection with the Hubble Space Telescope, astronomers from the University of Warwick have found that the star is much stranger than previously thought. The researchers spotted signs of carbon, sodium and aluminum in its atmosphere, and its mass was found to be very small – only about 40 percent that of the Sun.

Weirder still, this star is absolutely pelting through the Milky Way. The scientists measured its velocity and found that it’s traveling at around 900,000 km/h (560,000 mph).

Piecing together these bizarre characteristics, the team came to one conclusion: somehow the star underwent a partial supernova, but survived. This would have burned away the hydrogen and helium, which were missing, and produced the carbon, sodium and aluminum, which were detected.

It couldn’t have been a full supernova though. First of all, the star is still intact, but secondly the astronomers detected no iron, nickel, chromium or manganese, all of which should have been produced in a full-blown explosion.

The star’s unusually low mass could also be explained by an explosion blowing the rest of it away. And finally, the blast would be responsible for its insane speed. Altogether, the team says that the white dwarf once belonged to a binary pair, before some kind of partial supernova sent both stars shooting off in different directions.

“All of these facts imply that it must have come from some kind of close binary system and it must have undergone thermonuclear ignition,” says Boris Gaensicke, lead author of the study. “It would have been a type of supernova, but of a kind that that we haven’t seen before.”

This isn’t the only star to disobey what we thought were the rules about supernovae. In recent years several stars have been seen to completely vanish without the trademark explosion. Another appears to have picked up the slack and gone supernova several times over a few decades.

The research was published in the journal Monthly Notices of the Royal Astronomical Society.

Source: University of Warwick via Phys.org

Michael Irving
Michael has always been fascinated by space, technology, dinosaurs, and the weirder mysteries of the universe. With a Bachelor of Arts in Professional Writing and several years experience under his belt, he joined New Atlas as a staff writer in 2016.
–
–
(For the source of this, and many other equally intriguing articles, please visit: https://newatlas.com/space/white-dwarf-star-survives-supernova/)