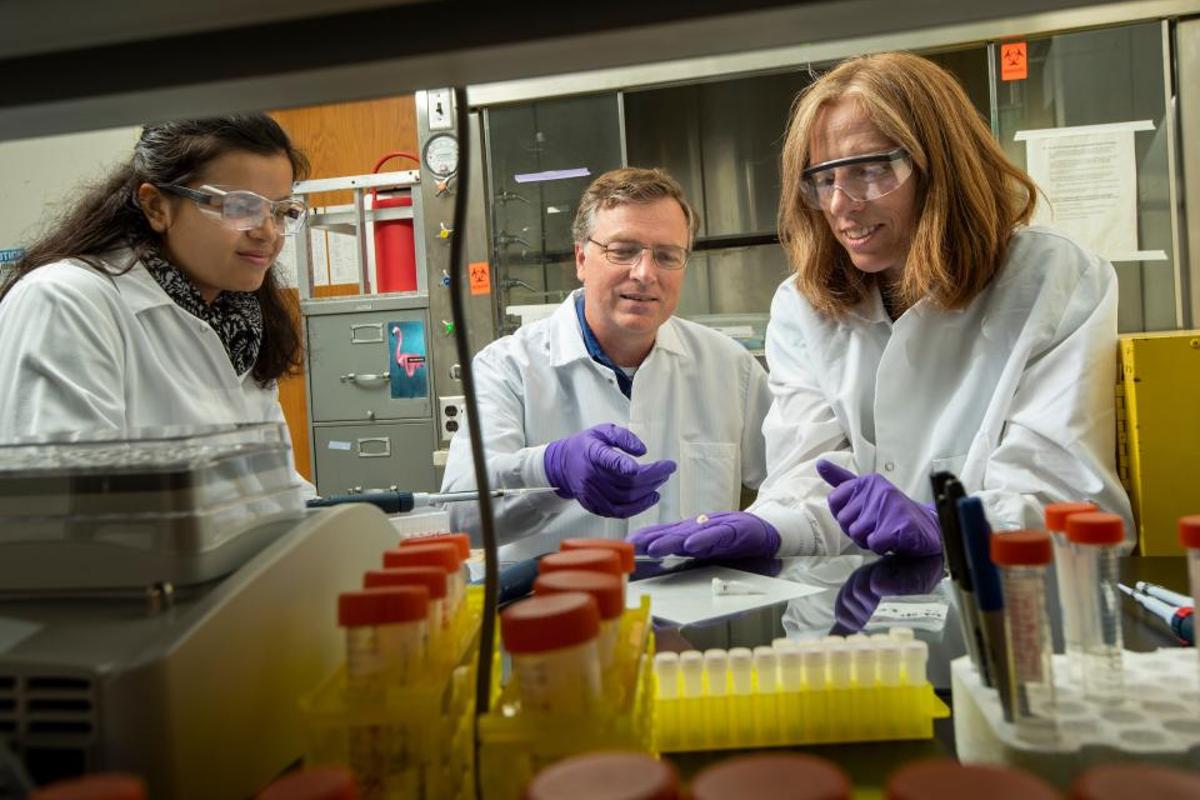 The technique was developed in the laboratory of Adjunct Associate Professor Glendon Parker (center).  Karen Higgins/UC Davis
–
By David Szondy
Scientists at UC Davis have tested a new method for determining the sex of human remains based on proteins extracted from tooth enamel. Based on a study of 55 Native American remains dating between 300 and 2,300 years old, the technique has proven more reliable than those based on DNA or bone anatomy.

The study of skeletal and dental remains is a key tool in understanding ancient human societies, but conventional methods for determining the sex of individuals are not always reliable. The oldest and most widely used method is based on the anatomical differences between male and female skeletons, but these can only be applied to adults and are only reliable for populations that can provide large enough samples for compiling statistically reliable tables. Worse, these anatomical methods are almost worthless when dealing with bone fragments.

A more modern method is through DNA fragments that can be studied to find sexual markers. However, preserved and uncontaminated DNA is notoriously difficult to retrieve from archaeological sites even with techniques like Polymerase Chain Reaction (PCR), which can “photocopy” tiny samples of recovered DNA for analysis. Even then, DNA degradation due to time and environment can affect its reliability as a sex indicator.

Led by postdoctoral researcher Tammy Buonasera, the UC Davis team worked with remains excavated from two ancestral Ohlone villages near Sunol, California, by the Far West Anthropological Research Group of Davis in collaboration with the Muwekma Ohlone tribe. Instead of looking at taxonomy or DNA, the scientists extracted the protein amelogenin from the tooth enamel. Amelogenin is produced by the splicing or splitting of the AMELX gene on the X chromosome in females or AMELY gene in males on the Y chromosome during the process of amelogenesis, which is the development of tooth enamel.

By studying the sequence of 20 amino acids that make up the protein, the team could work backwards and determine the DNA code that created the protein and therefore the sex of the person from whom the tooth was taken. According to the researchers, the new method was more reliable than anatomy or DNA, which only worked in half the cases. In addition, the protein method worked on the remains of children.

The results were published in Scientific Reports.

David Szondy
David Szondy is a freelance journalist, playwright, and general scribbler based in Seattle, Washington. A retired field archaeologist and university lecturer, he has a background in the history of science, technology, and medicine with a particular emphasis on aerospace, military, and cybernetic subjects. In addition, he is the author of a number of websites, four award-winning plays, a novel that has thankfully vanished from history, reviews, scholarly works ranging from industrial archaeology to law, and has worked as a feature writer for several international magazines. He has been a New Atlas contributor since 2011.
–
–
(For the source of this, and many other equally intriguing articles, please visit: https://newatlas.com/science/tooth-enamel-protein-identify-sex-ancient-human-remains-dna/)
Tweet