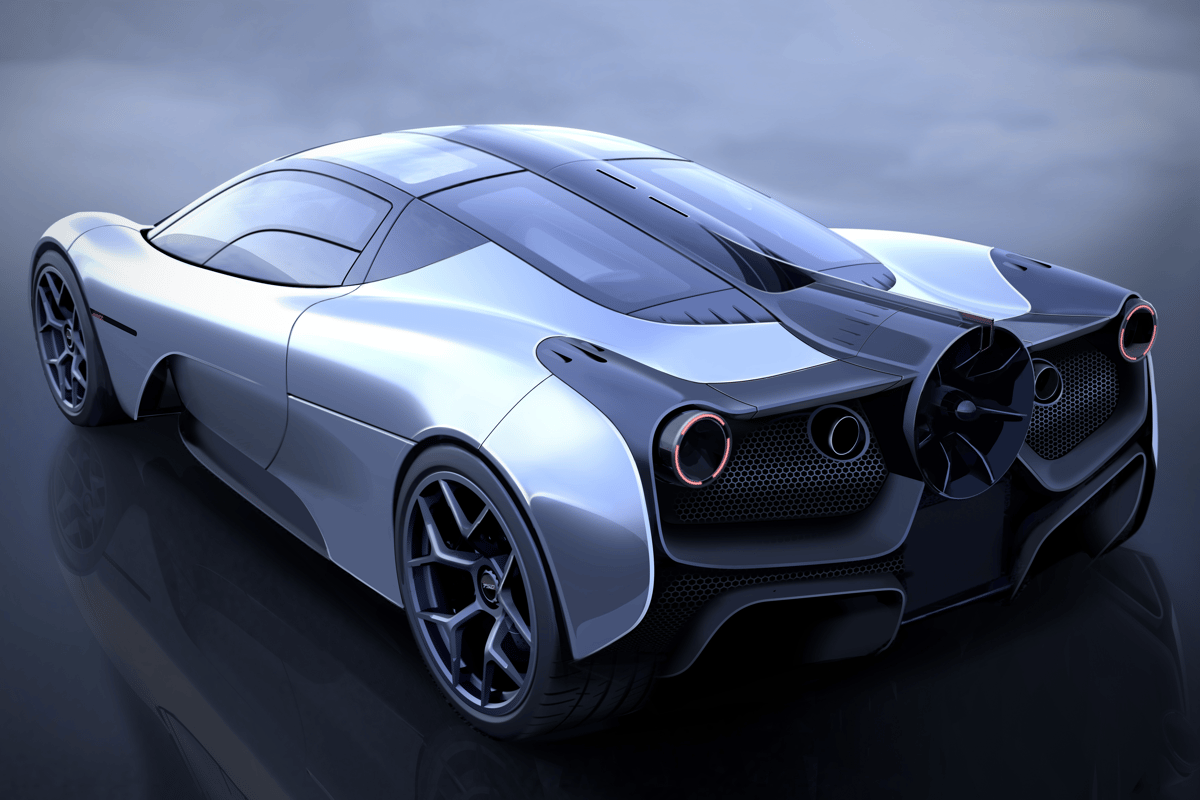 One of the most extreme and remarkable supercars ever built, the Gordon Murray T.50 pushes boundaries in many directions.  Gordon Murray Design
–

By Loz Blain
–
To briefly recap, this three-seater will weigh just 980 kg (2,160 lb) – that’s less than five fast motorcycles. It’ll have the same “jet fighter” cabin arrangement as Murray’s own McLaren F1 design and the more recent McLaren Speedtail: a driver’s seat front and center with two passenger seats behind and to the sides.
More Stories

Murray has also applied the “Brabham BT46 fan car” concept to the T.50’s aerodynamics: a whirling 15.7-inch (40-cm) underbody fan that literally sucks the car down onto the road when it’s running, while also using this flow of air to cool the engine and fire out the back to fill in a negative pressure area behind the car and reduce drag.

It was an international outrage when Murray put this system on an F1 car back in 1976. The other teams’ eyes were on stalks watching the suspension compress when the engine was revved at a standstill, and the Brabham team withdrew it as an act of good faith after winning the only race it competed in. But there’s no sportsman’s code stopping Murray from doing it on a street car, so by gum he’s going for it.

Today we learn more about the engine in this thing, and while it doesn’t go for huge power, this is sure to be an absolute classic, and the answer to many petrolhead trivia questions in future decades.

Cosworth is the engine shop of choice, and it’s hard to imagine who else would’ve been able to take on the challenge of meeting Murray’s brief on this: ultra lightweight, massively responsive and road-driveable, as well as offering big top-end horsepower, no belts, highest-revving production street car engine ever, that sort of thing.

Cosworth’s own Managing Director Bruce Wood puts it this way: “The criteria and benchmarks set by Gordon for the T.50 engine comprised one of the toughest engine briefs we’ve ever taken on. It pushes the boundaries in every direction and it is a genuine thrill for everyone at Cosworth to be part of what will surely become as fabled a vehicle as Gordon’s McLaren F1 before it. The programme has taken Cosworth to new heights and, although only time will tell, it already feels like the GMA V12 has the potential to be one of the most iconic engines of all time.”

Murray, who began his career as an engine designer, started out by trying to get this thing as close as possible to his favorite engines of all time: the 3.5-liter Honda V12 engine from the McLaren MP4/6 racers he was working on in the early 90s. What’s more, it had to be exposed. In his own words, “I wanted it to be the antidote to the modern supercar where you can’t see the engine beneath carbon covers.”

Having spent so much time around top-flight race cars, Murray was also frustrated by the low-revving, lazy feel of sportscar motors. Even his own McLaren F1, with its BMW S70/2 V12 engine, pulled the plug at just 7,500 rpm, when Murray felt the party should just be getting started. So with the T.50, he set the bar at nothing short of the world’s highest-revving production car engine, at a sky-high 12,100 rpm, in a world where there are only a small handful of other cars that can do 10,000 rpm.

Not only did it have to rev into the stratosphere, it had to deliver usable torque lower down in the rev range so it could actually be driven on the street without making a driver look like a fool in traffic, and Murray wanted it to be wildly responsive to throttle inputs to boot.

If you’re going for a top speed run – and hey, driving one of these things is pure fantasy, so why wouldn’t you – you can engage VMAX mode, which turns the car’s integrated starter-generator into an electric boost worth another 49-odd horsepower, taking the total up over 700 horses.

How about responsiveness? Well, it’ll also be the most responsive street car engine ever built, by a country mile. Murray measures this in terms of revolutions gained per second when you blip the throttle. Thanks to all the ultra-lightweighting measures involved, and a pinch of Cosworth fairy dust, the T.50 will rev from idle to its 12,100rpm redline in three tenths of a second, representing a ludicrous responsiveness figure of 28,400 revs per second.

I can’t think of anything else in our world that spins up this quickly; maybe you can, in which case let us know in the comments below. For comparison, a Formula One car, says Murray, gains about 10,000 revs per second; a rough third of the rate at which the T.50 will spin up. Just bananas.

Harder to quantify in a competitive sense will be the noise it makes, but Murray has taken considerable steps to ensure it’s “one of the best-sounding road car engines ever made” as well. For starters; no turbos. Turbos might be a quick and easy path to extra horsepower, but if you’re finding yourself in need of more than 700 horsepower in a sub-thousand kilo supercar, you need your head read, and as they harvest exhaust energy, they also deaden much of the glorious noise a high-performance engine makes.

This sound is channeled into the T.50’s cabin for your enjoyment through a cold-air ram induction intake directly above the driver’s head. The varying thickness of the carbon roof has been tuned to amplify it, and since the induction system opens and closes based on the throttle and not the current engine speed, the sound only gets amplified when you’re right up it on the gas.

Thus, it should be reasonably socially acceptable when you’re bimbling about town, but it’ll howl like a beast from hell when you stick the gumboot in. “As you push towards the upper end of the rev range,” says Murray, “this V12 will sing like nothing else on the road.” We believe him.

The engine’s also designed to act as a semi-structural member in the frame; the suspension wishbones hang off the bespoke Xtrac short-shift manual gearbox, for example, and Murray has also ensured that it keeps the weight low down for superbly grounded handling. The T.50’s steel crank, for example, sits just 8.5 cm (3.3 in) from the bottom of the engine.

There are no “unsightly” belts. Murray hates them and thus everything’s gear-driven. Indeed, he’s ensured all eyesore ancillaries are tucked away out of sight, and to celebrate how good the engine looks, he’s given it its own set of gull-wing engine bay doors, rising up from the spine of the car for mechanical access with a bit of theater to it.

As fun as it is to gawk at thousand-plus-horsepower hypercars, there’s a good argument that the T.50 will be a better driver’s car than any of them. Super-lightweight and plenty powerful, it’ll stick to the road like white on rice, straining necks and pulling cheeks in the corners. And there’s nothing on the face of the Earth that’ll rev up so lightning-fast or scream the song of its people quite like this Cosworth motor.

Only 100 are being made, at an as-yet-undisclosed price well over two and a half million Freedom Bucks. I sure hope we get to see what these things can do.

Loz Blain
Loz has been one of our most versatile contributors since 2007. Joining the team as a motorcycle specialist, he has since covered everything from medical technology to aeronautics, music gear and historical artefacts. Since 2010 he’s branched out into photography, video and audio production.
–
–
(For the source of this, and many other equally wild articles, plus to see all seven images associated with this article, please visit: https://newatlas.com/automotive/gordon-murray-t-50-cosworth-engine/)