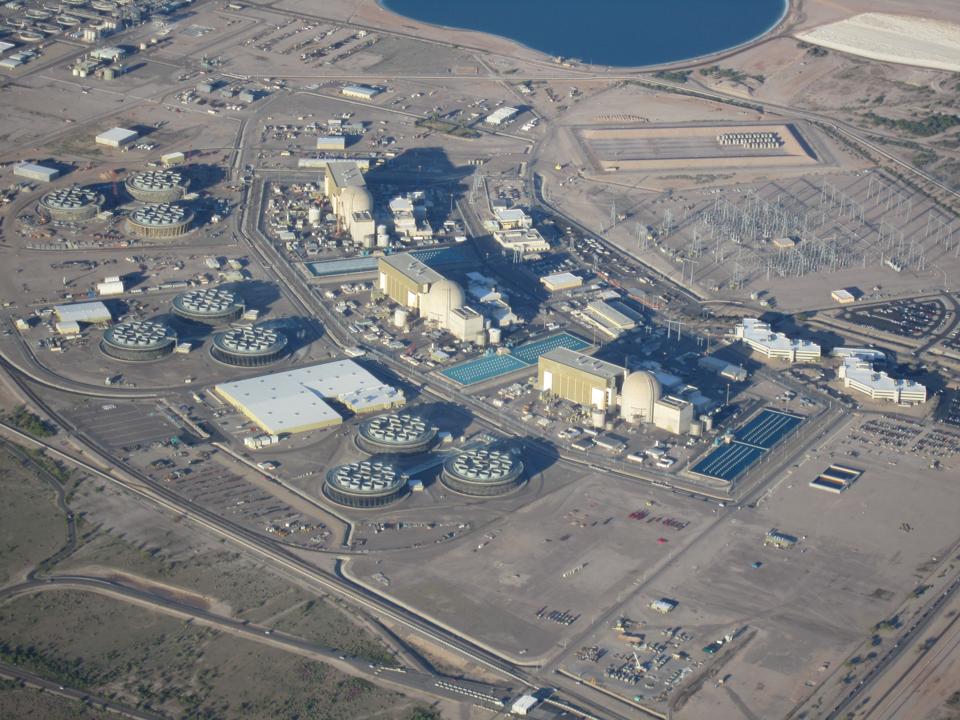 Palo Verde Nuclear Plant. Unit 3, scene of the drone incursions, is on the right.  WikiMedia – Cuhlik
–

By David Hambling, Contributor, Aerospace & Defense –
I’m a South London-based technology journalist, consultant and author – 2020 Jul 30
–
Documents gained under the Freedom of Information Act show how a number of small drones flew around a restricted area at Palo Verde Nuclear Power Plant [Tonopah, Arizona] on two successive nights last September. Security forces watched, but were apparently helpless to act as the drones carried out their incursions before disappearing into the night. Details of the event gives some clues as to just what they were doing, but who sent them remains a mystery. [Editor’s Note: The Palo Verde Generating Station is the largest power plant in the United States by net generation.]
–

Details of the events were obtained from the Nuclear Regulatory Commission by Douglas D. Johnson on behalf of the Scientific Coalition for UAP Studies (SCU) using the Freedom of Information Act (FOIA). The SCU’s main interest is in anomalous aerospace phenomena, what other people term UFOs. In this case though the flying objects were easily identifiable as drones, although their exact mission and origin are unknown. Johnson passed the information to The War Zone who give a detailed account.

Palo Verde Nuclear Power Plant is the largest in the U.S., producing over three gigawatts, 35% of Arizona’s total power capacity. It supplies electricity to Phoenix and Tucson, as well as San Diego and Los Angeles. It is a critical piece of strategic infrastructure; during the 2003 Iraq War, National Guard troops were deployed to Palo Verde to defend against a possible terrorist threat. In normal times, as with other nuclear installations, it is protected by armed security guards.

The armed guards, gates, fences and barriers were useless on the night of September 29th. According to the official report:

“Officer noticed several drones (5 or 6) flying over the site. The drones are circling the 3 unit site inside and outside the Protected Area. The drones have flashing red and white rights [sic] and are estimated to be 200 to 300 hundred feet above the site. It was reported the drones had spotlights on while approaching the site that they turned off when they entered the Security Owner Controlled Area. Drones were first noticed at 20:50 MST and are still over the site as of 21:47 MST. Security Posture was normal, which was changed to elevated when the drones were noticed.”

The drones departed at 22:30, eighty minutes after they were first spotted. The security officers estimated that they were over two feet in diameter. This indicates that they were not simply consumer drones like the popular DJI Phantom, which have a flight endurance of about half an hour and is about a foot across, but something larger and more capable. The Lockheed Martin Indago, a military-grade quadcopter recently sold to the Swiss Army, has a flight endurance of about seventy minutes and is more than two feet across. At several thousand dollars apiece minimum, these are far less expendable than consumer drones costing a few hundred. All of which suggests this was not just a prank.

The next night events were repeated:

“Four (4) drones were observed flying beginning at 20:51 MST and continuing through the time of this report (21:13 MST). As occurred last night, the drones are flying in, through, and around the owner-controlled area, the security owner-controlled area, and the protected area. Also, as last night, the drones are described as large with red and white flashing lights.”

Local police from Maricopa County were dispatched to find the drone operators, but with no success. The site is reportedly due to receive drone detection gear, but not counter-drone jammers or other defensive equipment that might stop such incursions.

Despite this incident, two months later the NRC decided not to require drone defenses at nuclear plants, asserting that small drones could not damage a reactor or steal nuclear material. It is highly likely that such sites are still vulnerable to drone overflights.

Are such drones a genuine threat to nuclear facilities? Many argue that because reactors are protected by two to three feet of concrete, able to withstand the impact of a small airliner – Sandia Laboratories [Albuquerque, New Mexico] actually carried out a full-scale test to prove this – small drones are nothing to fear. However, drones would probably not go for a brute-force approach, but would use their ability to strike pinpoint targets to hit control systems and failsafes. While this would be unlikely to cause a Chernobyl, it might well shut the plant down, taking out 35% of Arizona’s electricity at a stroke. The successful attack on the Abqaiq facility last year, in which about twenty garage-built drones knocked out a heavily-defended oil facility in Saudi Arabia, should be a wakeup call that such unmanned precision strikes are not just the preserve of state actors any more.

The most obvious answer is that the drones were gathering intelligence, using cameras or other surveying gear too large for a consumer quadcopter. Surveyors use drones fitted with LiDAR, light-based radar, to build accurate three-dimensional pictures of buildings and landscapes with an accuracy of a few centimeters. Others use drone-based photogrammetry, a technique which correlates a large number of two-dimensional images into a full three-dimensional one. Either process requires much longer than a straightforward flyover, which may explain why there were there for so long.

A fleet of several drones could have been sent to survey the entire site in one hit. However, after their success on the first night, the drone operators may have been tempted to go back again to cover any areas they might have missed or get more detail. This may have gathered all they needed, so there was no need for a third mission.

This suggests that the intruders, as well as establishing that Palo Verde lacks effective drone defenses, may now have highly detailed maps of the facility, showing the exact location of every valve, pipe, switch and control. Perhaps they simply aim to sell these on the dark web to anyone who will pay. Or perhaps they have something else in mind. Either way, it is an alarming demonstration of how easily drone intruders can now go anywhere anytime they wish.

Author of ‘Swarm Troopers: How small drones will conquer the world,’ following cutting-edge military technology in general and unmanned systems in particular. New science fiction collection ‘Time Loopers: Four Tales From a Time War’ out now in paperback and Kindle.

(For the source of this, and many other equally intriguing articles, please visit: https://www.forbes.com/sites/davidhambling/2020/07/30/drone-swarm-invaded-palo-verde-nuclear-power-plant/#4e67933643de/)