Poorer, hotter parts of the world will struggle to adapt to unbearable conditions, research finds. – 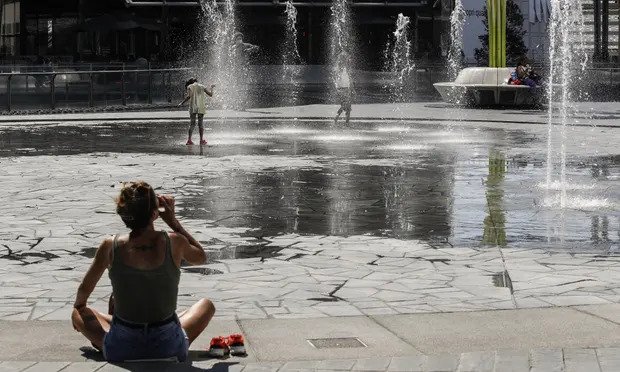 A woman drinks as children cool off in a public fountain in Milano, Italia, on 31 July.  2020 is set to be hottest or second hottest year on record, in line with the longer-term trend of rising temperatures.  Photograph: Luca Brun

–
The growing but largely unrecognized death toll from rising global temperatures will come close to eclipsing the current number of deaths from all the infectious diseases combined if planet-heating emissions are not constrained, a major new study has found.

Rising temperatures are set to cause particular devastation in poorer, hotter parts of the world that will struggle to adapt to unbearable conditions that will kill increasing numbers of people, the research has found.

The economic loss from the climate crisis, as well as the cost of adaptation, will be felt around the world, including in wealthy countries.

In a high-emissions scenario where little is done to curb planet-heating gases, global mortality rates will be raised by 73 deaths per 100,000 people by the end of the century. This nearly matches the current death toll from all infectious diseases, including tuberculosis, HIV/Aids, malaria, dengue and yellow fever.

The research used an enormous global dataset of death and temperature records to see how they are related, gathering not only direct causes such as heatstroke but also less obvious links such as a surge in heart attacks during a heatwave.

“A lot of older people die due to indirect heat affects,” said Amir Jina, an environmental economist at the University of Chicago and a co-author of the study, published by the National Bureau of Economic Research. “It’s eerily similar to Covid – vulnerable people are those who have pre-existing or underlying conditions. If you have a heart problem and are hammered for days by the heat, you are going to be pushed towards collapse.”

Poorer societies that occupy the hottest areas of the world are set to suffer worst. As already baking temperatures climb further this century, countries such as Ghana, Bangladesh, Pakistan and Sudan face an additional 200 or more deaths per 100,000 people. Colder, richer countries such as Norway and Canada, meanwhile, will see a drop in deaths as fewer and fewer people perish due to extreme cold.

“You see the really bad impacts at the tropics,” said Jina. “There’s not one single worldwide condition, there’s a lot of different changes with poorer people much more affected with limited ability to adapt. The richer countries, even if they have increases in mortality, can pay more to adapt to it. It’s really the people who have done the least to cause climate change who are suffering [the most] from it.”

Huge heatwaves have roiled the US, Europe, Australia, India, the Arctic and elsewhere in recent years, while 2020 is set to be hottest or second hottest on record, in line with the longer-term trend of rising temperatures. The deaths resulting from this heat are sometimes plain enough to generate attention, such as the fact that 1,500 people died in France from the hot temperatures during summer last year.

Within richer countries, places already used to the heat will have an adaptation head start on areas only now starting to experience scorching conditions. “A really hot day in Seattle is more damaging than a really hot day in Houston because air conditioning and other measures are less widespread there,” said Bob Kopp, a co-author and climate scientist at Rutgers University.

“It’s not going to be free for Seattle to get the resilience Houston has. Obviously in poorer countries the situation is much worse. Climate change is a public health issue and an equality issue.”

The economic cost of these deaths is set to be severe, costing the world 3.2% of global economic output by the end of the century if emissions are not tamed. Each ton of planet-warming carbon dioxide emitted will cost $36.60 in damage in this high-emissions world, the researchers calculated.

This worst-case scenario would involve emissions continuing to grow without restraint, causing the average global temperature increase to surpass 3C by 2100. The world has heated up by about 1C, on average, since the dawn of mass industrialization, an increase scientists say is fueling increasingly severe heatwaves, wildfires, storms and floods.

A more moderate path, where emissions are rapidly cut, will see temperature-related deaths less than a third of the more severe scenario, the researchers found. The economic costs will be significantly lower, too.

“It’s plausible that we could have the worst-case scenario and that would involve drastic measures such as lots of people migrating,” said Jina. “Much like when Covid overwhelms a healthcare system, it’s hard to tell what will happen when climate change will put systems under pressure like that. We need to understand the risk and invest to mitigate that risk, before we really start to notice the impacts.”

… because that is when the US withdraws from the Paris climate accord, on 4 November. Five years ago nearly 200 countries committed to a collective global response to tackle the climate crisis. But when Donald Trump took office he announced that the US would leave the Paris agreement. On the one issue that demands a worldwide response to help safeguard the Earth for future generations, the US has chosen to walk away. The president is playing politics with the climate crisis – the most defining issue of our time.

The stakes could scarcely be higher and with your help we can put this issue at the center of our 2020 election coverage. The election will be a referendum on the future of democracy, racial justice, the supreme court and so much more. But hovering over all of these is whether the US will play its role in helping take collective responsibility for the future of the planet.

The period since the Paris agreement was signed has seen the five hottest years on record. If carbon emissions continue substantial climate change is unavoidable. The most impacted communities will also be the most vulnerable. Instead of helping lead this discussion the White House prefers to roll back environmental protections to placate the fossil fuel industry.

High-quality journalism that is grounded in science will be critical for raising awareness of these dangers and driving change. Because we believe every one of us deserves equal access to fact-based news and analysis, we’ve decided to keep Guardian journalism free for all readers, regardless of where they live or what they can afford to pay. This is made possible thanks to the support we receive from readers across America in all 50 states. If you can, support the Guardian from as little as $1 – and it only takes a minute. Thank you.

Support the Guardian
–
–
(For the source of this, and many other equally intriguing and important articles, please visit: https://www.theguardian.com/us-news/2020/aug/04/rising-global-temperatures-death-toll-infectious-diseases-study/)