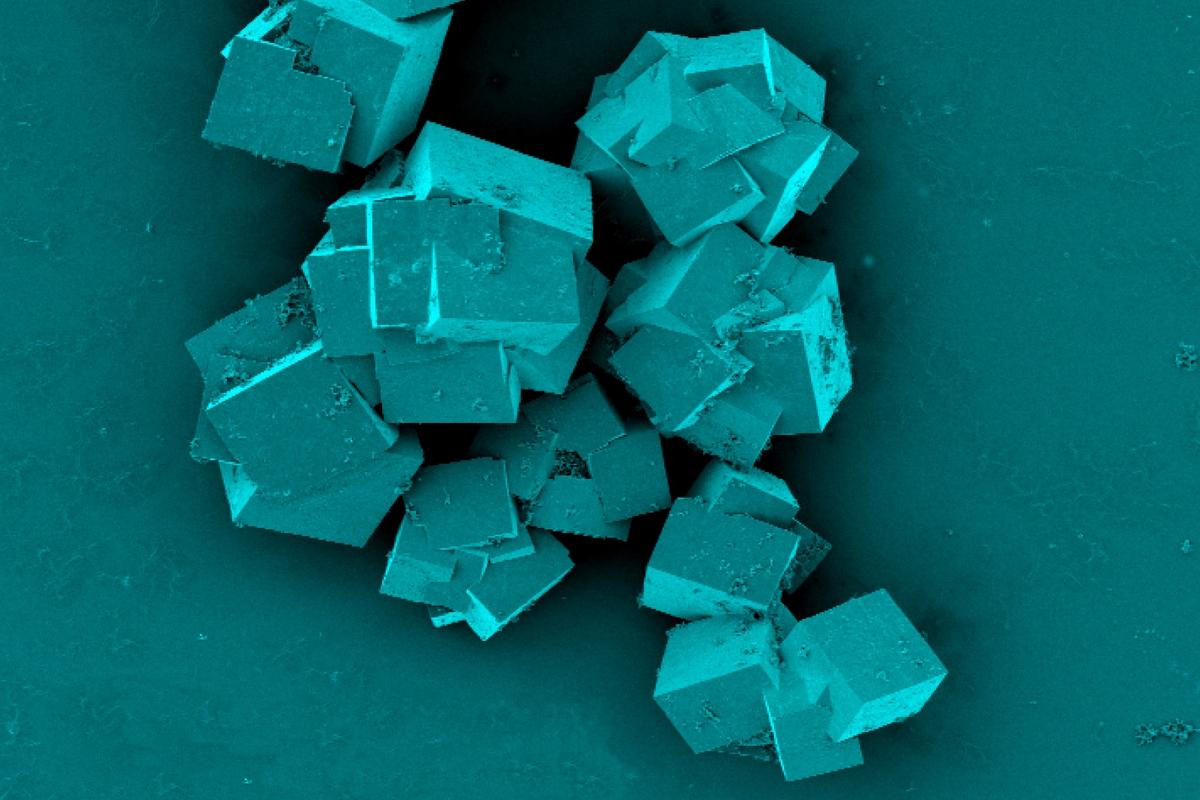 A scanning electron microscope image of metal-organic frameworks.  CSIRO
–
By Michael Irving
Access to clean, safe drinking water is a necessity that’s worryingly not being met in many parts of the world. A new study has used a material called a metal-organic framework (MOF) to filter pollutants out of seawater, generating large amounts of fresh water per day while using much less energy than other methods.

MOFs are extremely porous materials with high surface areas – theoretically, if one teaspoon of the stuff was unpacked it could cover a football field. That much surface area makes it great for grabbing hold of molecules and particles.

In this case, the team developed a new type of MOF dubbed PSP-MIL-53, and put it to work trapping salt and impurities in brackish water and seawater. When the material is placed in the water, it selectively pulls ions out of the liquid and holds them on its surface. Within 30 minutes, the MOF was able to reduce the total dissolved solids (TDS) in the water from 2,233 parts per million (ppm) to under 500 ppm. That’s well below the threshold of 600 ppm that the World Health Organization recommends for safe drinking water.

Using this technique, the material was able to produce as much as 139.5 L (36.9 gal) of fresh water per kg of MOF per day. And once the MOF is “full” of particles, it can be quickly and easily cleaned for reuse. To do so, it’s placed in sunlight, which causes it to release the captured salts in as little as four minutes.

While there’s no shortage of desalination systems in use or development, the team says that this new MOF is faster-acting than other techniques, and requires much less energy throughout the cycle.

“Thermal desalination processes by evaporation are energy-intensive, and other technologies, such as reverse osmosis, have a number of drawbacks, including high energy consumption and chemical usage in membrane cleaning and dechlorination,” says Huanting Wang, lead author of the study. “Sunlight is the most abundant and renewable source of energy on Earth. Our development of a new adsorbent-based desalination process through the use of sunlight for regeneration provides an energy-efficient and environmentally-sustainable solution for desalination.”

The research was published in the journal Nature Sustainability.

Michael Irving
Michael has always been fascinated by space, technology, dinosaurs, and the weirder mysteries of the universe. With a Bachelor of Arts in Professional Writing and several years experience under his belt, he joined New Atlas as a staff writer in 2016.
–
–
(For the source of this, and many other equally intriguing articles, please visit: https://newatlas.com/environment/metal-organic-framework-desalination-seawater/)
Tweet