Every doctor, physician and nutritionist who has ever donned a white coat would agree that, to a great extent, we humans really are what we eat. But over recent years, with advances in scanning technologies, archaeologists and anthropologists have begun to harness this undeniable fact, under the right circumstances, by using the dietary data contained in ancient bones as if it were a history book.

One archaeological site that offers these “right circumstances” is the Lower Palaeolithic Eartham Pit Boxgrove site in West Sussex. First excavated in the 1980s and 1990s, the site was found to hold fossilized bones from Homo heidelbergensis , a possible ancestor for modern humans and Neanderthals. Homo heidelbergensis inhabited a partly-terraformed world about 500,000 years ago. The find represents the oldest ‘human’ remains ever discovered in Britain.

Exploring the Remains of a Half-Million-Year-Old People

Project leader of new excavations at the Boxgrove site, the archaeologist Dr. Matthew Pope from UCL’s Institute of Archaeology, says that they have also unearthed horse bone tools, the earliest evidence of bone toolmaking ever discovered in the history of European archaeology. This suggests that the archaic humans performed an act of butchery at the site. The evidence comes in the form of piles of stone flakes found around the horse, suggesting to the researchers that perhaps more than “eight individuals” had come together to prepare large flint knives for the job.

Apart from the discovery of butchered horse bones, the result of a blood-thirsty event frozen in time, further evidence has been collected that suggests that many more people were present at the scene. This is providing new information about how this deeply ancient “community” might have formed a social structure that ultimately wove through the corridors of time, resulting in modern day societies, communities, villages, towns and cities, and now social media. 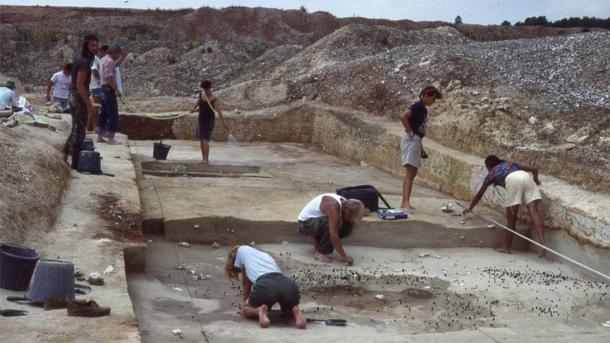 Excavation of the Boxgrove site in West Sussex in 1990. (UCL INSTITUTE OF ARCHAEOLOGY)

Thawing a Frozen Moment in Time

This discovery represents a moment “frozen in time.” But please, do not for one second think this is a fluffy journalistic term, because it was chosen very carefully after Dr. Pope is reported to have said that this was an “exceptionally rare opportunity to examine a site pretty much as it had been left behind by an extinct population.” In a BBC article, the scientist goes on to explain: “Incredibly, we’ve been able to get as close as we can to witnessing the minute-by-minute movement and behaviors of a single apparently tight-knit group of early humans: a community of people, young and old, working together in a co-operative and highly social way.” The group could have numbered up to thirty or forty people, clarifies the researcher.

The evidence suggests that the ancient group of survivalists united in the process of cleaving meats and sinus from a horse carcass, on what was the edge of an expansive coastal marshland located along Britain’s southern coastline. “Grassland means herbivores and herbivores mean food,” explains Dr. Pope. Using a process called re-fitting, the researchers have been able to piece together the types of stone tools made at the site. This has helped the archaeologists conclude that the early hunters, or even foragers if they found the horse already dead, must have taken some of these tools away with them, as there are no signs of them at the excavation site. This would mean that these people were not just subsisting, but rather forecasting their dietary requirements to a certain degree. 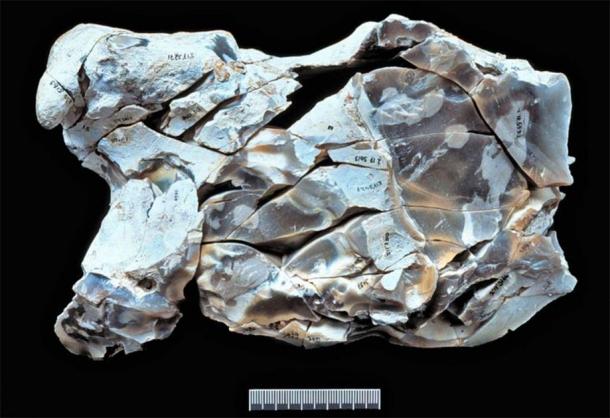 The process called re-fitting, where archaeologists put together shards left over from making a tool in order to reveal the shape of the tool by casting the remaining void, was employed at the Boxgrove site. This artifact, created with over 100 re-fitted flint shards, divulged the shape of the original hand axe. (UCL INSTITUTE OF ARCHAEOLOGY)
–

During the first weeks of the Covid-19 lockdown, our group psychology shifted. Each of us came to resemble survivalists, as we shifted our concerns to our depleting food and water stocks, and threatened supply chains. If you imagine continuously living in this tense and worrisome state, and add to that being outdoors and exposed to the elements of nature, you may start to understand what it was like to live at the Boxgrove site .

Under such stressful living conditions, the concept of garbage or trash didn’t exist, and everything had a potential second life. This is evidenced in an analysis of the horse bones by Simon Parfitt, from the University College London (UCL) Institute of Archaeology , and Dr. Silvia Bello, from London’s Natural History Museum . As they explain in the BBC article, their research demonstrates that some of the bones had “been used as tools called re-touchers.” But these are not any “old” tools. As Dr. Parfitt highlights, “these are some of the earliest non-stone tools found in the archaeological record of human evolution.” And not just in Britain, but anywhere on the planet.

The findings of a ‘meticulous study’ led by UCL Institute of Archaeology are detailed in a ground-breaking new book  ‘The Horse Butchery Site’ , published by  UCL Archaeology South-East’s ‘Spoilheap Publications ’.

Ashley was raised in Wick, a small fishing village in the county of Caithness on the north east coast of Scotland, and he went on to study filmmaking in Glasgow. In his early-20s he began exploring ancient landscapes in the… Read More

(For the source of this, and many other equally intriguing articles, please visit: https://www.ancient-origins.net/news-history-archaeology/horse-bone-tools-0014116/)