When American painter Bob Ross said, “There are no mistakes, only happy accidents,” he was ostensibly referring to paint on a canvas.

But Mr. Ross’s mantra is just as true for fish from coral reefs, where the eggs of one species of fish and the sperm from another can sometimes combine to produce hybrid offspring with colors even more startling than that of their parents. Think of them as the happy little shrubs of speciation.

Take, for example, the multibarred angelfish (Paracentropyge multifasciata), which boasts black-and-white stripes like window blind slats, and the purple masked angelfish (Paracentropyge venusta), which resembles a lemon drop with a brilliant purplish-blue backside. When the two fish breed, they produce a blue-and-yellow hybrid swirled with white, almost like a slice of babka.

When Yi-Kai Tea, a graduate student at the University of Sydney and the Australian Museum Research Institute first saw this squiggly angelfish, he suspected it was a hybrid. Although coral reefs may appear to be a panoply of bright hues, many coral reef fish have colorful patterns as distinct as stamps. So when a hybrid happens, it’s easy to spot.

As Mr. Tea hunted around for other examples of the apparent hybrid, he came up with the idea for a comprehensive survey of all known, naturally occurring marine angelfish hybrids, which he and his colleagues describe in a paper published this month in Proceedings of the Royal Society B. 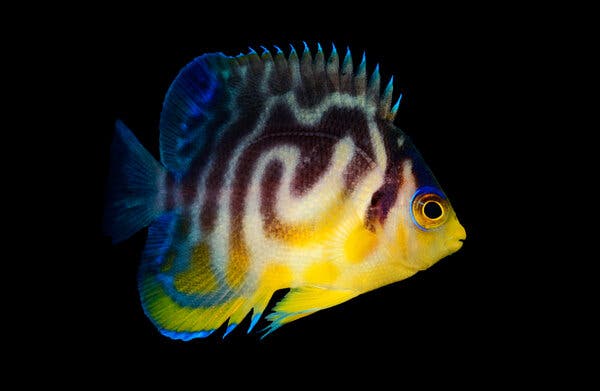 A hybrid Venusta multifasciata, a cross between a multibarred angelfish and a purple masked angelfish.  Credit…Yi-Kai Tea
–

To find potential subjects, the researchers pored through photographs, old studies and museum archives. Mr. Tea even asked to see someone’s pet fish. After comparing the mitochondrial DNA of 37 hybrids to that of their parents’ species, the team found that a lofty 48 percent of marine angelfishes can hybridize, more than any other group of coral reef fish. This data topple the previous record-holders, the butterflyfishes, a family in which more than a third of species are capable of producing hybrids.

“Hybridization in reef fishes has been a conundrum for some time,” Hugo Harrison, a molecular ecologist at James Cook University in Australia who was not affiliated with the paper, wrote in an email.

The hybrid process was historically dismissed as a rare phenomenon among coral reef fish, but a growing body of research in the past few decades has uncovered a surprising abundance of hybrid reef fish, according to a 2015 paper in Current Zoology.

In the case of butterflyfish, most hybrids happen in the narrow edges where two different populations meet. If a butterflyfish strays too far from its own kind, it may have trouble finding a mate of its own species. “So they’ll mate with someone that looks the most like them,” said Luiz Rocha, curator of fishes at the California Academy of Sciences, who provided examples of hybrids for the paper.

But the new paper found that the majority of angelfish hybrids occur between species that live on the same reefs. At first glance, sympatric hybridization makes no evolutionary sense, and even poses a threat to species diversity. If a fish of one species could repeatedly produce viable offspring with another species living on the same reef, the two species could erode into one.

One possible explanation is that angelfish reject monogamy. Unlike butterflyfish, which mate for life, angelfish live in harems where multiple females mate with a single male.

“When the male identifies one female in his harem, they will rise up in the water column and release their sperm and eggs,” Mr. Tea said. Once adrift, an egg is fair game for fertilization by a sperm from any other species. Although this can technically happen for all reef fishes, the chances of fluke fertilization are much higher with several angelfish species squatting on the same reef. “In the ocean, accidents happen,” Dr. Rocha said. 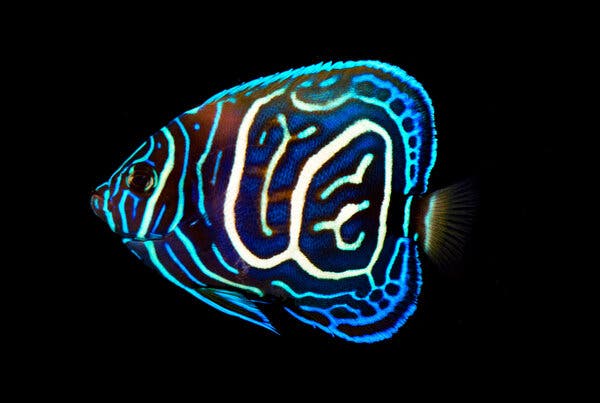 A juvenile emperor hybrid, a cross between the Emperor angelfish and the bluering angelfish.Credit…Yi-Kai Tea
–

One of the paper’s most surprising findings is that angelfishes can produce hybrid offspring with species possessing as much as 11 percent difference in mitochondrial DNA. “This is extremely remarkable,” Mr. Tea said, noting that this evolutionary distance was equivalent of a liger (but not quite as far-flung as the sturddlefish).

“What’s fascinating about this study is that hybrids are so common, not just geographically but also among species lineages.” Dr. Harrison said.

Although the paper reveals a surprising abundance of angelfish hybrids, the mechanism itself — how and why hybrids form — remains a conundrum, the researchers write. One eccentricity, for example, is the fact that the researchers could not find a single example of a hybrid regal angelfish, a tropical fish that swims almost anywhere there is a tropical ocean.

The 11 percent hybrid in the new paper is a mix between the Emperor angelfish, or Pomacanthus imperator, and the bluering angelfish, Pomacanthus annularis.

The juvenile emperor resembles tree rings of porcelain, concentric blue and white circles rippling out from its tail, while the juvenile bluering sports chevroned blue and white stripes. In their hybrid offspring, amazingly enough, these circles and stripes transmogrify into a maze that might be found in a child’s puzzle book. If only the secrets of hybridization were as easy to solve.

Final Meals at Closing Restaurants: ‘I Will Dream of Those Dumplings’

–
–
(For the source of this, and many other equally interesting articles, please visit: https://www.nytimes.com/2020/08/22/science/angelfish-paracentropyge-hybrid-genetics.html/)