Fifty years ago, few scientists believed a drug could fight viruses with low side effects. Then Gertrude Elion showed the doubters “what I could do on my own.” 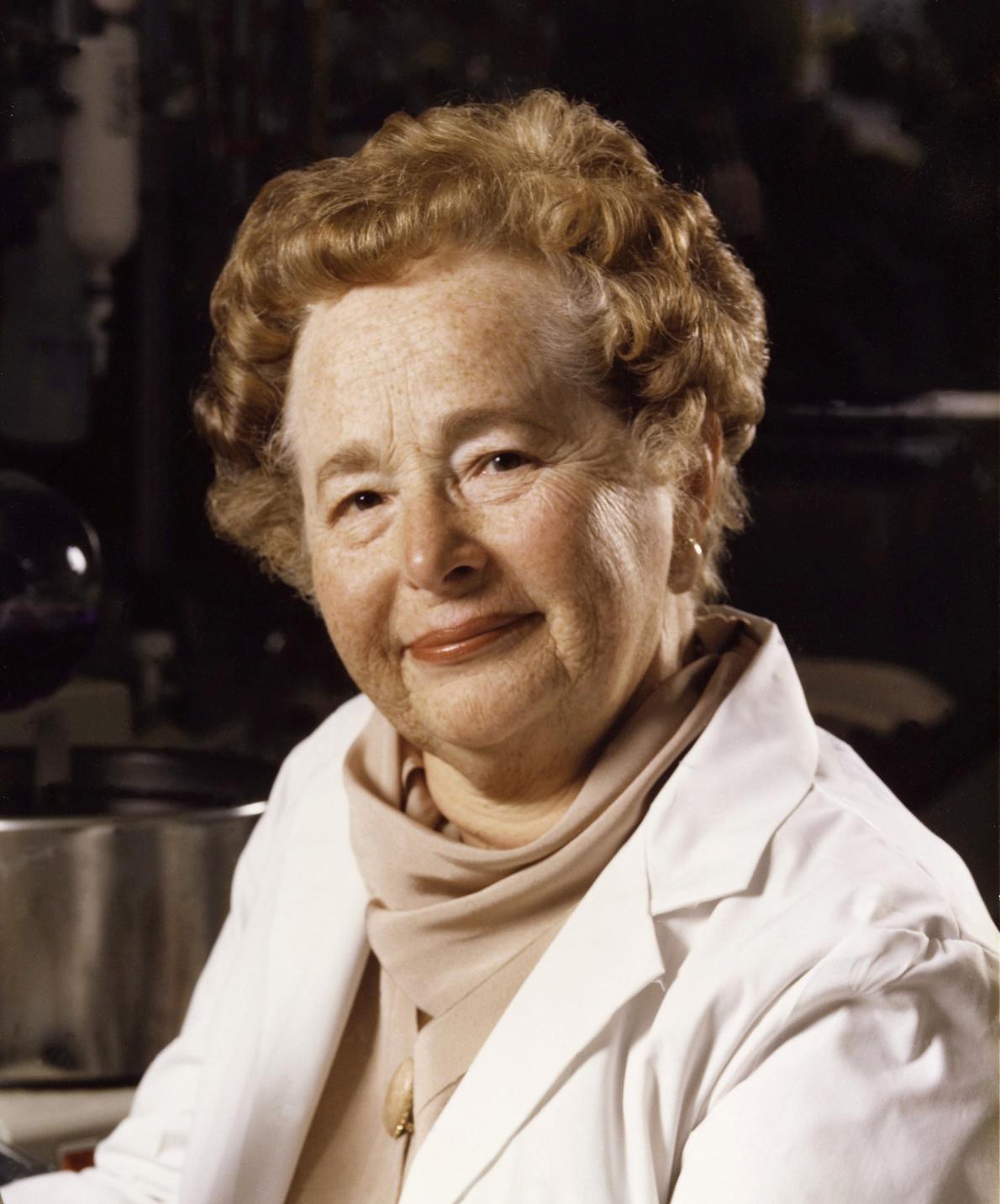 Born in 1918 in Manhattan, Gertrude Elion developed the drug acyclovir, a potent inhibitor of herpes viruses with remarkably low toxicity, which her team unveiled in 1978.

When news broke in April that the drug remdesivir had been shown to speed recovery in patients hospitalized with COVID-19, Anthony Fauci, director of the U.S. National Institute of Allergy and Infectious Diseases, hailed the finding as “an important proof of concept” in the race to bring the pandemic to heel.

Unlike a vaccine, which prompts the body to mount a defense against invading viruses, remdesivir is an antiviral drug, which hampers the ability of a virus to replicate and spread. For now, results related to remdesivir are mixed, although some studies continue to suggest the drug can improve outcomes for patients with severe forms of COVID-19. Still, only a few decades ago, most scientists doubted such a thing was even possible—that a tiny, parasitic particle wholly reliant on a host cell to reproduce could be inhibited without harm to the cell itself.

Now, antivirals are used to treat herpes, hepatitis, HIV, Ebola, and more. And arguably, none would exist today were it not for Gertrude “Trudy” Elion.

Born in 1918 in Manhattan, Elion overcame early financial hardship and outright sexism to win the 1988 Nobel Prize in Physiology or Medicine, becoming only the fifth woman to do so. She shared the award with her longtime collaborator George Hitchings, who hired her in 1944 to join his biochemistry lab at the pharmaceutical company Burroughs Wellcome (now part of GlaxoSmithKline).

It was only after Hitchings’ retirement from active research in 1967 that Elion embarked on what she would later describe as her “antiviral odyssey.” By then, Elion “had had enough already of being junior” and seized the opportunity, at last, “to show what I could do on my own,” she told writer Sharon Bertsch McGrayne, author of the 2001 book Nobel Prize Women in Science.

Worse, it seemed no matter how well she’d done in school, research laboratories wouldn’t hire a woman. As she recalled years later, on more than one occasion she was told that, though she was qualified for the position, she would be “a distracting influence” on the laboratory staff.

Nevertheless, Elion persisted, taking temporary jobs and living at home to save up money. She worked as a food analyst for a grocery chain, answered phones at a doctor’s office, and taught chemistry in New York City high schools while pursuing her master’s degree at New York University on nights and weekends.

Finally, thanks to labor shortages created by World War II, real opportunities started coming her way, first with Johnson & Johnson and then with Burroughs Wellcome.

Science
Racist housing policies have created some oppressively hot neighborhoods
Science
An extraordinary summer of crises for California’s farmworkers
Animals
There’s a new peacock in town, and no one knows what to do with him
–
–

Up until the 1970s, most new drugs were found by trial-and-error or stumbled upon serendipitously. Take Alexander Fleming’s accidental discovery of penicillin, which revolutionized the treatment of bacterial infections. Or the chance observation by a French army surgeon, Henri Laborit, that an anesthetic called chlorpromazine had a calming effect on patients with schizophrenia, the first in a series of breakthroughs in psychiatric medication.

Hitchings proposed another way forward—a rational, scientific approach to drug discovery based on knowledge of a biological target. He hypothesized that scientists could inhibit pathogen cells from replicating by making defective copies of their genetic building blocks. Once these copies were integrated into the germ’s metabolic pathways, they would jam up the cellular machinery, interfering with the reactions necessary for DNA synthesis.

Shortly after hiring Elion, Hitchings assigned her to work on purines. These ring-like nitrogen molecules were known to be a type of nucleoside, the broad term for the structural bases of DNA. Elion didn’t know what purines were, but after months of poring over the literature, she began making compounds “that had never been described before” and “felt the excitement of the inventor who creates a ‘new composition of matter.’”

“Trudy was making nucleosides before we even knew what the structure of DNA was,” says Marty St. Clair, a virologist who came to work for Elion in 1976. “That’s how well she understood the chemistry.”

Together, Elion and Hitchings pioneered the use of rational drug design, and they were phenomenally successfully. Over a 20-year period, the pair invented new medicines for a long list of serious conditions: leukemia, malaria, gout, rheumatoid arthritis, organ rejection, bacterial infection, and more.

Their first drug, 6-mercaptopurine (6-MP), came about in 1951 through a collaboration with researchers at Memorial Sloan-Kettering Cancer Center in New York. Still a mainstay in combination therapy for children with acute lymphoblastic leukemia (ALL), 6-MP made possible one of the great success stories in cancer treatment, helping to increase the cure rate of ALL in children from 10 percent in the 1950s to more than 80 percent today.

Several years later, Elion and Hitchings developed the anti-malarial agent pyrimethamine, which is now used primarily to treat a potentially fatal foodborne illness called toxoplasmosis. (Better known by its brand name Daraprim, the drug made headlines with its 2015 purchase and price hike by the disgraced former pharmaceutical executive Martin Shkreli.) And with the development of trimethoprim—still commonly prescribed as part of the combination treatment for urinary tract infections—they added to the growing arsenal of medicines made during what became known as the golden age of antibiotic discovery.

By contrast, the quest for drugs to treat viruses lagged far behind.

The first approved antivirals didn’t arrive on the market until the early 1960s, and all fell far short of expectations. As one history of antivirals observed, the early versions of these drugs were “somewhere between cancer chemotherapeutic principles and folk medicine.” Highly toxic and minimally effective, they merely confirmed what most scientists had long assumed: Because virus and cell are so inextricably intertwined, viral diseases simply couldn’t be treated.

Acyclovir was the drug that changed everything in the effort to develop effective antivirals.  Keith Jerome, University of Washington

At one time, Elion might well have agreed. Back in 1948, she had noticed that a compound she’d synthesized for the treatment of cancer—2,6-diaminopurine—had shown impressive antiviral activity. She was intrigued but became discouraged by the drug’s toxicity, and ultimately shelved it to focus on other work.

In 1968, shortly after Hitchings had left the lab to become vice president of research, Elion came across a report that something similar to 2,6-diaminopurine had recently shown antiviral activity. The news “rang a bell,” she later said, prompting her and her team of “diligent and devoted scientists” to pick up where she’d left off two decades prior.

Over the next four years, they secretly studied a remarkable new compound they called acyclovir, working to unravel the mysteries of its activity and metabolism without alerting the competition to what they’d found.

Presented in 1978 at a conference in Atlanta, Georgia, acyclovir was unlike anything the world had ever seen. A potent inhibitor of herpes viruses with remarkably low toxicity, it shattered the conventional wisdom. Much like penicillin half a century before, it heralded the advent of a new therapeutic era.

“Acyclovir was the drug that changed everything in the effort to develop effective antivirals,” says Keith Jerome, director of the molecular virology laboratory at the University of Washington medical school. “It proved it was possible to develop highly specific drugs that targeted viruses without causing unwanted side effects.”

Elion called acyclovir her “final jewel,” and indeed, it was the last drug she would develop during her official tenure at Burroughs Wellcome. She retired in 1983, but those working in her lab almost didn’t realize. “She still came in every day,” recalls St. Clair, who was instrumental in discerning acyclovir’s mechanism of action.

In 1991, Elion was awarded the prestigious National Medal of Science by then-President George Bush, who said she exemplified how one person’s work can help “banish suffering and prolong life for many millions of people.” Elion died in 1999 at age 81.

St. Clair said she and colleagues “used many of the same procedures that we did for acyclovir to look for a drug for HIV.” They soon found it in another nucleoside analogue selected from a handful of the company’s most promising compounds. “That wouldn’t have happened without Trudy,” St. Clair says. “We did what she trained us to do, and we ended up with AZT,” or azidothymidine, the first drug approved for the treatment of HIV.

Though only moderately effective, AZT paved the way for later generations of life-saving antiretroviral therapy. The NIAID’s Fauci has said he believes remdesivir can do the same, opening the door to the discovery and development of new, more effective drugs for COVID-19.

“Trudy showed us we could do this,” St. Clair says. “That things that people thought were impossible are not impossible.”

–
Magazine
How World War II put penicillin into every pharmacy
An urgent drive to develop infection-fighting drugs for the wounded led to the mass production of the first effective antibiotic.
Science
The pandemic may fuel the next wave of the opioid crisis
Magazine
Scientists are unraveling the mysteries of pain
Magazine
The opioid crisis exposed in photos from a hard-hit neighborhood

Travel
Beirut has rebuilt before. Here’s how the city will do it again.
TravelCoronavirus Coverage
A guide to renting a house during a pandemic

Photo of the Day

Photo of the Day

Our editors’ favorite photos from 2009 to today