Donald Trump once claimed that he could shoot someone in the middle of Fifth Avenue in New York City and not lose any voters. He’s now seeing whether the same is true if he kills Social Security.

His unilateral, unprecedented step of deferring the collection of payroll taxes, the backbone of Social Security, is the murder weapon he would use.
––
Trump has already ordered the Treasury Department to stop collecting Social Security’s dedicated payroll contributions for the next four months pursuant to the Internal Revenue Code, which permits deferrals of taxes when a disaster is declared. Once re-elected, if he keeps deferring those taxes, all benefits will come to a screeching halt, with no Congressional involvement whatsoever.
–
According to estimates from the independent chief actuary of the Social Security Administration, if all Social Security contributions from payroll tax stopped on Jan. 1, 2021, the nearly 10 million people today getting Social Security Disability Insurance benefits, which averages about $1,125 every month, would see them stop abruptly in the middle of 2021. Those 55 million receiving Social Security Old-Age and Survivors Insurance benefits, which average around $1,440 a month, would see them disappear two years later. Social Security would be without money to pay benefits by 2023 (Congress could only stop Trump by enacting veto-proof legislation, a highly unlikely proposition).
–
Section 7508A of the Internal Revenue Code allows deferrals for up to one year, long enough to stop the disability insurance payments. Killing off the rest of Social Security takes two years longer, but a newly elected President Trump could interpret the statute to permit an additional 12-month deferral with the declaration of a new disaster. All benefits could be stopped with just two new disaster declarations. Concerningly, the Supreme Court has found that President Trump has “broad discretion” in making findings.
–
With a presidential threat to have zero benefits paid whatsoever, congressional supporters of Social Security would effectively be held hostage, with little they could do but give into the demands of a lame duck president. It is not hard to imagine, at that point, a backroom deal that fulfilled the longstanding right-wing goal of eliminating the features of Social Security that have made it so successful and so popular.
– 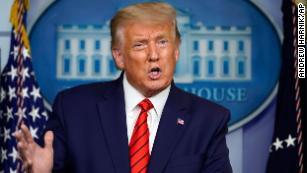 What Benjamin Franklin warned us about
–

Prior to running for president on the Republican ticket, Trump endorsed privatizing Social Security and raising its full retirement age to 70, asking, “How many times will you really want to take that trailer to the Grand Canyon?” Other longstanding right-wing goals are to means-test Social Security and adopt the technical but far-reaching change of price-indexing. Those are not only deeply unpopular, but would impose enormous cuts, while also ending Social Security as it has existed since its enactment 85 years ago.
–
Some pundits are giving Trump the benefit of the doubt, arguing that Congress would simply make up for the missing payroll contributions with general revenue. That, though, is highly unlikely. We are talking about general revenue of over $1 trillion a year. Since no one is suggesting raising taxes to make up the lost revenue from Social Security, that additional $1 trillion would have more than doubled the fiscal year 2019 deficit.
–
And, of course, spending has already gone up and revenue has gone down, thanks to the pandemic. According to the Congressional Budget Office, spending has increased 50% in the first 10 months of this fiscal year and the deficit has more than tripled.
–

Importantly, even just substituting general revenue would fundamentally alter Social Security. Its dedicated revenue and inability to deficit-spend means that Social Security does not add a penny to the nation’s federal debt. Social Security’s creator, President Franklin D. Roosevelt clearly understood the importance of those Social Security contributions, which, in his words, “give the contributors a legal, moral, and political right to collect their [Social Security] pensions.”

Get our free weekly newsletter

Trump has shown himself willing to attack numerous fundamental institutions. He has attacked the US Postal Service, which the Constitution explicitly lists as an enumerated power of Congress. He has attacked the free press and our elections. Does anyone believe he wouldn’t take our Social Security system hostage to attain a radical reform?
–
Adding insult to injury, it is easy to imagine that Donald Trump will host a Rose Garden signing ceremony for legislation ending Social Security as we know it. He will use the occasion to brag about “saving” Social Security — as he signs its destruction.

–
–
–
(For the source of this and many other equally important articles, please visit: https://www.cnn.com/2020/09/01/opinions/social-security-payroll-trump-altman/index.html)
Tweet