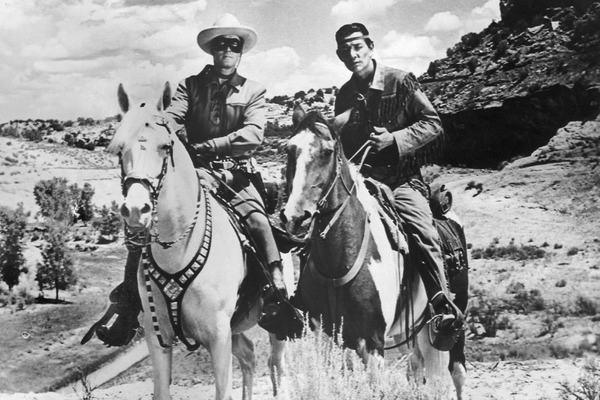 Harry Smith, under the name of Jay Silverheels, was a Mohawk actor who famously portrayed Tonto on The Lone Ranger

Remember Tonto and the Lone Ranger? You might recognize my book cover with Harry Smith, aka Jay Silverheels, ready to grab his gun. I am a citizen of Cherokee Nation and an Assistant Professor of History and Native American and Indigenous Studies at Indiana University. My book has just been released entitled, Picturing Indians: Native Americans in Film, 1941-1960.

In this book, I draw attention outside the frame of the films we watch from this era and remind readers that the movie sets were workplaces. Although I was interested in all aspects of work on the sets, including makeup artists, costumers, and the food prep people, just to name a few, I look in particular at those playing Native American characters, especially Native people playing Native characters. This comprises both actors and extras. With actors, I am invoking union guidelines around speaking parts and time on screen, and Native actors never took the lead role. This meant that supporting or minor parts were the highest-level Native workers achieved at the time.

Some of these men included Harry Smith, or Jay Silverheels, who graces the cover of Picturing Indians. Harry was a Mohawk man from the Six Nations Reserve in Canada, as is Gary Farmer, the actor who appears in many films, including Powwow Highway and Dead Man. Smith had over 100 film credits, with a commanding film presence even in the limiting roles he was offered. In spite of working non-stop for decades, generating tremendous wealth for the many studios where he worked, Harry struggled financially his entire life. In LA he rented a one-bedroom apartment near the corner of Sunset and Bronson. He passed away with massive legal debts, suffering from medical malpractice and dragging himself through a legal battle until the day he passed.

Like Harry Smith, Daniel Simmons, a member of the Yakama Nation, used Chief Yowlachie as a name that would define and present him as a Native American to casting agents and the American public. He too has over 100 film credits, but as far as I know never owned a home in Los Angeles. In fact, he rented a granny flat in East LA where he received his meager checks from the studio.

There are several other Native men who worked regularly in supporting roles and I go over this in the book, but let’s move onto those who worked as extras [also known as “background actors”]. Again, I use union terminology, emphasizing that extras are people working in front of the camera with no lines. There are hundreds, perhaps thousands of Native people who appeared in movies of the 1940s and 1950s according to the studios’ archives. Sometimes I know their names, such as Plain Feather, a Crow man who worked as an extra in Warpath and Donald Deer Nose, also Crow, who worked in Warpath as well. Often extras went unidentified in photographs taken by the studio. Only from archival materials would I know, for instance, that the woman in a studio photograph is Diné or Navajo. Perhaps now that the book is out, I will be able to identify her and stop referring to her and others as anonymous extras.

To be clear, Picturing Indians is a behind the scenes look at movies of the 1940s and 1950s. Initially I believed the movies and the film sets ran in parallel tracks, separate and uninformed by each other. Yet the more I looked at the archival materials alongside the films themselves, the more I saw just how oppositional they are. What I mean by that is the films recreate American history in a particular way, usually with complicated plot devices for white characters, extremely simplistic ones for Native characters, and the constant of Indian violence and white innocence. Yet the materials from the sets where Native people worked tell something very different.

For instance, an image from the set of Drum Beat of two Apache women being photographed taking a photograph of Charles Bronson in Indian costume, leaning back seductively in a chair, seems to be saying something about Native women finding Charles Bronson attractive. Yet this film is about hundreds of white soldiers and volunteers hunting down and surrounding Modocs then executing their leader.

Or another example comes from an image of an Apache male extra taking a photo of a beaming William Holden on the 1953 set of Escape from Fort Bravo. A studio photographer photographed this moment, staged or spontaneous, which seems to indicate pleasure and camaraderie, yet this film made by MGM tells a story about deeply divided northern and southern whites during the Civil War, who come together when faced with violence from Apaches.

The last example I will give of this disjuncture and perhaps the most stunning comes from the set of Far Horizons in 1955. We see tribal chairperson Herman St. Clair with a number of Eastern Shoshone men offering Donna Reed a fishing permit, invoking their sovereign fishing rights to give her the right to fish on their waters. They have maintained these rights by way of the Fort Bridger Treaty of 1868. Yet St. Clair took this action, perhaps nothing more than a stunt, on the set of a film that has nothing to do with tribal sovereignty. Instead the film tells the story of settler colonialism with Lewis and Clark as heroes.

There are so many moments I wish more people knew about, especially those who know and love these movies. But Picturing Indians maintains a steady analysis of the exploitation of Diné and their land by the movie industry. Monument Valley is Navajo land, yet it came to embody the West and the filmic West through the economic exploitation of the Diné. I document this quite precisely in the book in terms of how they were paid by John Ford and other filmmakers of the era. To better understand Diné today I would strongly recommend several movies for people to watch such as The Return of Navajo Boy, Basketball or Nothing or Drunktown’s Finest.

But more than anything, I want my readers to see that Harry Smith and other Native American actors gave Americans tremendous entertainment value with very little in return. Warner Bros. owns nearly all of the images in the film archives. Yet they gave permissions for me to reproduce them, then revoked that permission at the last minute as we went to press. My publisher pulled the cover image of Harry Smith for the cover from public domain. Smith’s family earns nothing from this and has no rights to the image. Yet the studios possess the rights and refuse to allow anyone to reproduce the vast numbers of images they hold of Native people who worked in film. Harry Smith made the studios a small fortune, but died with just about nothing.