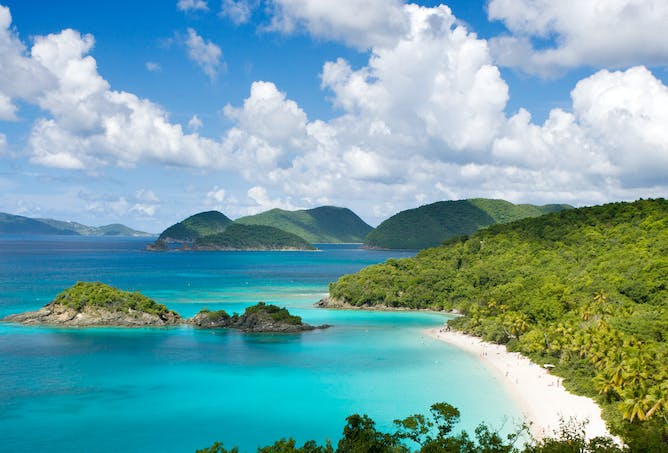 What route did the first settlers to colonize the islands of the Caribbean take? M.M. Swee/Moment via Getty Images

Jessica Stone, Affiliated Researcher in the Department of Anthropology, University of Oregon

For the millions of people around the world who live on islands today, a plane or boat can easily enough carry them to the mainland or other islands.

But how did people in the ancient past first make it to distant islands they couldn’t even see from home? Many islands around the world can be reached only by traveling hundreds or even thousands of miles across open water, yet nearly all islands that people live on were settled [at least] by between 800 to 1,000 years ago.

Archaeologists like us want to understand why people would risk their lives to reach these far-off places, what kinds of boat and navigational methods they used, and what other technologies they invented to make it. Islands are important places to study because they hold clues about human endurance and survival in different kinds of environments.

One of the most interesting places to study these processes is the Caribbean, the only region of the Americas where people settled an archipelago with some islands not visible from surrounding areas. Despite more than a century of research, there are still many questions about the origins of the first Caribbean people, when they migrated and what routes they took. My colleagues and I recently reanalyzed archaeological data collected over 60 years to answer these fundamental questions.

To see the interactive Google map of the Caribbean click the link below:

Settling the islands one by one

Based on the discovery of unique stone tools and food remains such as shells and bones, archaeologists have a general understanding that people first spread throughout the Caribbean in a series of migrations that probably began at least 7,000 years ago and likely originated from northern South America.

Amerindians paddled between islands in dugout canoes and were remarkably adept at open-water travel. Archaeologists don’t know what inspired people to first colonize the Caribbean islands, but we do know they brought plants and animals from the mainland, like manioc and oppossum, to help ensure their survival.

There are two main ideas about what happened. For decades, the prevailing notion was that people migrated from South America into the Antilles in a south-to-north “stepping-stone” pattern. Because the islands stretch in a gentle arc from Grenada all the way up to Cuba in the northwest – with many largely visible from one to the next – this would seem to provide a convenient path for early settlers.

This hypothesis, however, has been challenged by evidence that some of the earliest sites are in the northern islands. Analyses of wind and ocean currents suggest that it was actually easier to travel directly between South America and the northern Caribbean before moving in a southerly direction. Researchers call this proposal of a north-to-south migration the “southward route” hypothesis [SRH].

Figuring out which model for settling the Caribbean best fits the evidence depends on being able to assign accurate dates to human activity preserved in the archaeological record. To do this, researchers need a lot of reliable dates from many different sites throughout the islands to establish how, when and from where people landed.

Archaeologists typically use a technique called radiocarbon dating to figure out how old an artifact is. When an organism dies, it stops producing carbon and its remaining carbon decays at a fixed rate of time – archaeologists say “death starts the clock.” By measuring the amount of carbon left in the organism and then performing a few additional calculations, scientists are left with a probable age range for when that organism died.

Archaeologists often date things like food remains, charcoal from cooking hearths or wood in the building where they are found. If archaeologists date shells found in a trash heap, they can tell, usually within a range of 25 to 50 years or so, when that shellfish was harvested for a meal.

We recently reevaluated about 2,500 radiocarbon dates from hundreds of archaeological sites on more than 50 Caribbean islands.

Archaeologists have been radiocarbon dating findings in the Caribbean since the 1950s – when the radiocarbon technique was first discovered. But dating methods and the standards scientists follow have improved dramatically since then. Part of our job was to see if each of the 2,500 radiocarbon dates available would meet today’s standards. Dates that did not meet those standards were thrown out, leaving us with a smaller database of only the most reliable times for human activity.

By statistically analyzing these remaining dates, we confirmed that Trinidad was the first Caribbean island settled by humans, at least 7,000 years ago. However, Trinidad is so close to South America that only simple – or even no – boats were needed to get there.

After Trinidad, the oldest settlements occurred between 6,000 and 5,000 years ago in the northern Caribbean on the large islands of the Greater Antilles: Cuba, Puerto Rico and Hispaniola. Reaching them would have required crossing passages of water where no islands were visible to the naked eye, although navigators rely on other wayfinding techniques – like current, cloud patterns, seeing birds fly in a certain direction – to know if land is out there. By around 2,500 years ago, people had spread out to settle other islands in the northern Lesser Antilles, including Antigua and Barbuda.

Based on these data, the patterns of initial settlement of the Caribbean are most consistent with the southward route hypothesis.

Around 1,800 years ago, a new wave of people also moved from South America into the Lesser Antilles, colonizing many of the remaining uninhabited islands. About 1,000 years later, their descendants moved into the smaller islands of the Greater Antilles and Bahamian archipelago. This is when Jamaica and the Bahamas were settled for the first time.

Our research findings also support the widely held view that environment played a significant role in how and when islands were settled.

Archaeologists know that once people settled islands, they frequently moved between them. Not all islands are the same, and some offered more or better resources than others. For example, in the Bahamas and the Grenadines, the primary way to access freshwater is by digging wells; there are no streams or springs. Some islands lacked clay for making pottery, which was important for cooking and storing food. People may have also traveled to different islands to access preferred fishing or hunting spots or seek out marriage partners.

Strong seasonal winds and currents facilitated travel between islands. That’s also probably one of the reasons why Caribbean people never developed the sail or other seafaring technologies that were used in the Pacific, Mediterranean and North Atlantic around the same time. Dugout canoes crossed between South America and the islands just fine.

Interpretations of past human behavior at archaeological sites are anchored by radiocarbon dates to study change over time. For archaeologists, it’s important to periodically take another look at the data to make sure that the narratives built on those data are reliable. Our review of the radiocarbon record for the Caribbean allowed us to show – with increased accuracy – the ways in which the region was first colonized by people, how they interacted and moved between islands, and how their societies developed following initial colonization.

Matthew F Napolitano is a PhD Candidate at the University of Oregon.

Jessica Stone is an affiliated researcher with the Department of Anthropology at the University of Oregon.

Robert DiNapoli is a Postdoctoral Research Associate in Harpur College at Binghamton University and an affiliated researcher with the Department of Anthropology at the University of Oregon.

Scott Fitzpatrick is a Professor of Archaeology and Associate Director of the Museum of Natural and Cultural History at the University of Oregon.

Binghamton University, State University of New York provides funding as a founding partner of The Conversation US.

University of Oregon provides funding as a member of The Conversation US.

Write an article and join a growing community of more than 113,600 academics and researchers from 3,705 institutions.

–
–
(For the source of this, and many other equally intriguing articles, please visit: https://theconversation.com/archaeologists-determined-the-step-by-step-path-taken-by-the-first-people-to-settle-the-caribbean-islands-130669/)