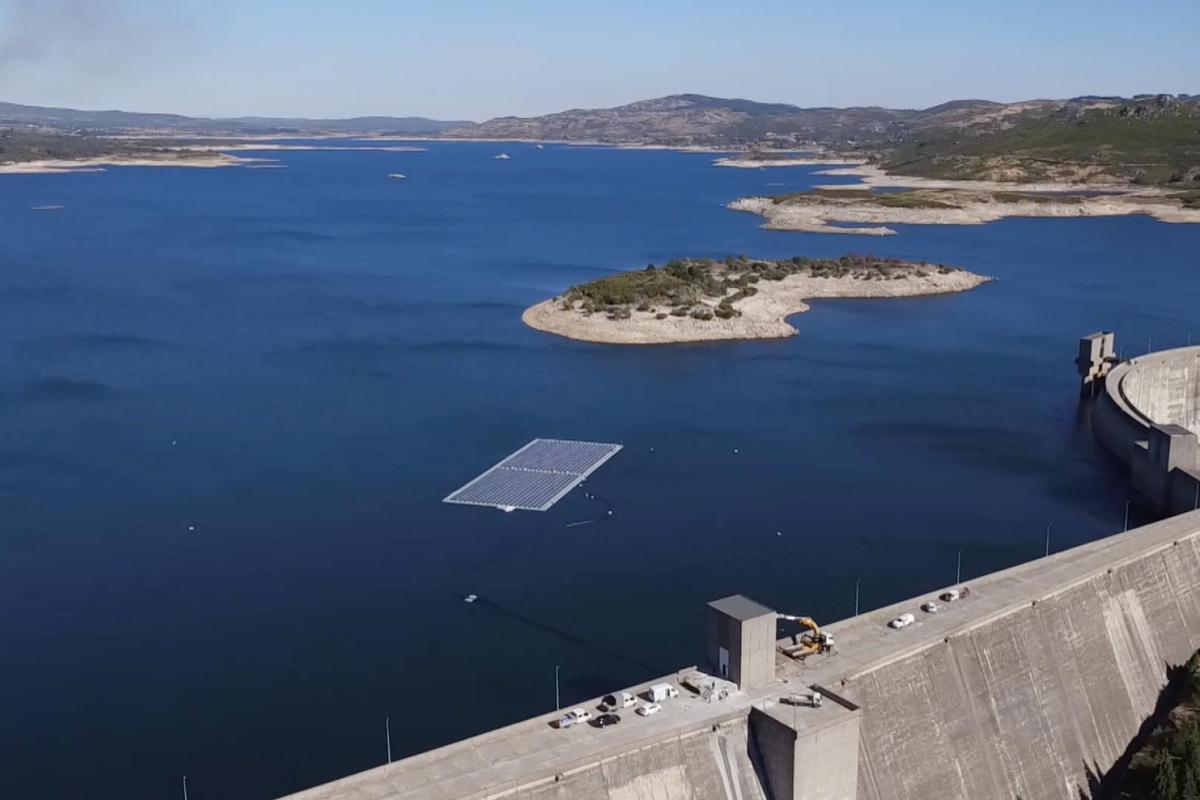 The first floating photovoltaic park on the dam of the River Rabagão, Portugal.  EDP

–
By Nick Lavars
Hydropower plants that leverage the force of falling water to generate electricity are already an important part of the global energy mix, but a new study suggests they may have much more to offer. Scientists have carried out an analysis of the energy potential of combining these facilities with floating solar panels, calculating these hybrid plants could meet a “significant” portion of the world’s current electricity needs.

The analysis was carried out by scientists at the US Department of Energy’s National Renewable Energy Laboratory (NREL) in Golden, Colorado, who looked at the freshwater hydropower reservoirs currently installed across the world and their potential to accommodate floating solar photovoltaic panels on the water’s surface. These systems could be retrofitted to allow solar power to be generated during the day, while the hydropower systems store up water and energy for use during peak demand periods.

As it stands, this kind of hybrid floating solar/hydropower system has been installed in only one location, as a pilot project in the dam of Portugal’s River Rabagão. It is made up of 840 solar panels covering 2,500 square meters (27,000 sq ft) and has an estimated energy production capacity of 300 MWh [Megawatt hours]. Energy provider EDP [Energias de Portugal] is planning to expand on this pilot project with an 11,000-panel floating photovoltaic system at Alqueva hydro power plant, one of the largest energy storage facilities in Portugal.

According to the new analysis from NREL, this is very much just scraping the surface of what these systems could offer. The team estimates that there are almost 380,000 other hydropower reservoirs around the world that could be fitted with these floating photovoltaic systems.

These would hook up to existing substations used by the hydro plants and could produce up to 7.6 TW [Terawatts] of power annually, or up to 10,600 TWh each year, not including the energy coming from the hydropower facilities already in place. This is a monumental figure, considering that electricity demand for the entire globe was just over 22,300 TWh in 2018, the researchers say.

The study is much more a way to highlight the potential of this almost non-existent energy solution than a roadmap to implementing it. The researchers say further work would be needed to assess the sites, as some may be dry at certain times of the year or there may be other factors that may make them unsuitable for floating photovoltaics, but even as a ball-park figure the finding is promising.

“This is really optimistic,” says Nathan Lee, lead author of the paper. “This does not represent what could be economically feasible or what the markets could actually support. Rather, it is an upper-bound estimate of feasible resources that considers waterbody constraints and generation system performance.”

The research was published in the journal Renewable Energy.

Nick Lavars
Nick has been writing and editing at New Atlas for over six years, where he has covered everything from distant space probes to self-driving cars to oddball animal science. He previously spent time at The Conversation, Mashable and The Santiago Times, earning a Masters degree in communications from Melbourne’s RMIT University along the way.
–
–