One company has exclusive rights to the source of the iconic pigment—a copper mine’s supply of iron deposits that may last just a century more. 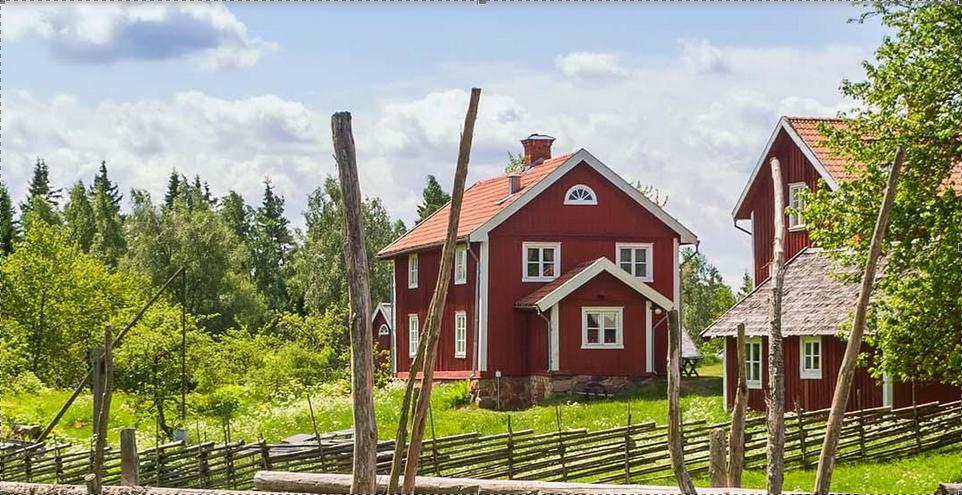 The color, known specifically as Falu red, has been a consistent symbol of pastoral life in Sweden. (Lars Johansson/EyeEm/Getty Images)

By Clarissa Wei
For the last 53 years, Christer Anderberg has been happily painting his country cottage and the adjacent barns the same exact color—a bright crimson red with white trimmings on the windows. Down the street, the neighbors’ homes are the same color scheme, and up and along the Swedish countryside, the red continues, as if it were mandated. Nearly all countryside houses and barns in Sweden are voluntarily red, albeit in different shades.The color, known specifically as Falu red, has been a consistent symbol of pastoral life in Sweden for the last century, an influence that thanks to the Swedish diaspora has seeped into bordering countries, like Norway and Finland, and even America, in the form of the big red barn. Today, the red paint can be bought in hardware stores across Sweden, though Anderberg (who is my father-in-law) recalls that when he was a kid, he saw people putting red pigment in buckets with water and flour to make the paint themselves. “They mixed it and boiled it,” he says.

For five decades, Anderberg’s country cottage property has been his pride and joy. While his primary residence is two hours south in the city of Malmö, the country cottage is a vacation home that he commutes to for holidays, weekends, and now whenever he wants because he’s retired. He bought it when he was in his 20s—a dilapidated centuries old property with a rotting foundation, and rebuilt it from the ground up. While there were a lot of decisions to make in the last 50 years, the color of the house was never up for debate. “The right color is always bright red,” he insists.

The source of the color is its namesake. Falu red comes from the Falun copper mine in central Sweden, which dates back to the 9th century. Today the mine is a museum and UNESCO World Heritage site, but at one point in history, it was the largest copper mine in Europe and the economic anchor of the Swedish kingdom. “In the 17th century, two-thirds of the Western world’s copper production came from Falun,” says Johanna Nybelius, an archeologist and museum educator at the mine. “At this time, Sweden was one of the great powers of Europe and everything was paid for with copper from Falun.” Of course, every mine has an expiration date and sure enough, copper resources started dwindling at the end of the 17th century; in 1687, the mine collapsed. “That was the end of the heyday,” says Nybelius. “From the 18th century, they started thinking about what they could do if there wasn’t that much copper. That’s when they really started turning up the production of the red paint. The idea is that it’s something to do when there’s nothing going on.”

Without any precious metals left, making red paint was a clever way to continue monetizing the mine. Falu red is a waste byproduct, made from leftover rocks and ores containing iron. Over time, the iron weathers to form iron oxide, which is the base for the unique pigment. That’s then washed, dried and burned. The heat transforms it from an earthy yellow to a brilliant red color. “In the drying oven, all the water disappears from the sludge and it changes color and begins to draw from yellow to red,” explains Martin Jansson, the CEO of Falu Rödfärg, the official Falu red paint company affiliated with the mine. The dry pigment is then ground, and mixed with water, flour and linseed oil to produce the paint. “For the first 200 years, it was a bright color because ovens weren’t that hot,” says Jansson. But today, thanks to precise temperature controls, multiple shades of Falu red exist, including a dark red and a black. The hotter the temperature, the darker the paint gets.

The paint making operation is found fenced off to the side of the mine, and the bulk of the mine has been converted into a tourist attraction and museum that gets over 100,000 visitors per year. The museum—located on ground level—is a smart and chronologically ordered timeline of the mine’s history. But the main draw is the actual mine itself, where people can suit up in rain jackets and helmets, and descend 200 feet underground to experience the mine as it was, in its full claustrophobic and slippery state—albeit with better lighting and handrails.

Though visitor numbers have declined slightly this summer due to the pandemic, the tours are still operating as usual. The underground mine is chilly at a steady 40 degrees, and the journey is led by tour guides, who tell stories of long-lost miners, precarious working conditions, and dangling buckets that once doubled as elevator lifts.

“That yellow dust that gets on your shoes when you walk around the mine? That’s the stuff that’s used to make the paint,” Nybelius points out.

It wasn’t difficult for the mine’s paint business to take off. The original red paint—bright, and almost luminescent in the afternoon sunlight—was already popular, due in part to the whimsies of the rich and royal during an architectural period known as the Brick Renaissance. Even though it wasn’t commercially manufactured until 1764, it was used as early as the 16th century. “The king of Sweden in the 1570s ordered that the castle in Stockholm and in Turku, Finland be painted red from material from the mine here,” says Nybelius. Back then, the grand Gothic brick buildings of the Netherlands were especially popular among northern European nobility. “When Sweden was a great power, we wanted our buildings to look like the bricks in Holland. But we have a lot of wood, so they just painted it to look like brick,” explains Anna Blomster, a PhD in Scandinavian studies from UCLA who wrote her thesis on Swedish red cottages. It was thus that red became a symbol of Swedish royalty, and, ironically, a nod to the pomp and grandeur of faraway kingdoms.

It was only in the early 1900s that the red paint became recognized as the archetype of Swedish country life. “We had a bad housing situation and had very high rents,” says Blomster. There was a shift to the countryside from the cities, due to a national recession that caused mass unemployment and evictions. By 1900, the rents in Stockholm were the highest in Europe. In 1904, a bill was passed to provide loans for people to build their own houses in the country. “If you were working class and sober, you could get financial aid to build your own house,” she says. “Somewhere in this process they started to talk about the red paint as the Swedish color and started to connect it to Swedishness.” In short, if you had a home and didn’t know what color to paint it, red was the recommended hue.

From then on out, the red cottage in the country has become an irreversible part of the Swedish identity—a perpetual motif on postcards, in storybooks, and in real estate agent listings. “If you ask a child to paint a house, it’s always painted red. The red house is the heart of Sweden,” says Nybelius.

The paint also has a distinct utility, which is part of the reason it has been a favorite for homeowners for centuries. Many say it’s an effective preservative, as evidenced by the fact that lost miners exhumed from the mine have come out nearly mummified. “There’s iron and copper vitriol in the paint,” says Nybelius. “Iron is good for preservation and copper is a fungicide.” However, these benefits are irrelevant today, when many paint companies can easily manufacture a similar and maybe even better preservative effect, especially with the availability of acrylic resins and paint primers. Still, old school Falu red paint has its own positives. “It lets the wood breathe,” says Nybelius. “If you paint with a modern plastic paint, you get a really watertight layer and you get problems with mold.” Jansson, who manufactures the paint, agrees. “It is easy to use the paint,” he adds. Whereas some modern paint formulas need to be scraped off before repainting, Falu red paint does not. Simply brush off loose pigment and dirt with a steel brush and reapply on the same spot.

Yet as with anything, even waste ore is a limited resource, and the red pigment from the mine will eventually be depleted. “We estimate that there’s 80 to 100 years of the pigment left,” says Nybelius. In defense of his company, Jansson stresses that there isn’t an exact timeline. “The truth is that we don’t really know how long it will last,” he says. “We’re taking the stones and the rocks, and we wash the sand out of it in order to burn the pigment, and then we put them out again. Then nature treats it so we can reuse it.” He gives an upwards estimate of 150 years, but admits that the pigment is indeed a limited resource that one day will be gone. “It will eventually run out, and we’ll have to find other sources,” he says. “We don’t have any surplus.” The Falu Rödfärg brand is holding onto their resources tightly; the pigment from the mine is exclusive to the company and trademarked.

Of course, red pigment will always be available some way or another; the right shade of red can be produced with any source of iron oxide and already lots of synthetic and almost identical variations are on the market. Still, some people swear on the official Falun mine-sourced paint. Falu Rödfärg is the largest producer of red paint in Sweden, selling approximately 2 million liters of paint a year. “Corona has been good for us,” says Jansson, noting that this year, many homeowners have been spending the summer working on home renovations instead of traveling. Anderberg, for example, only started using the Falu Rödfärg brand in the last couple of years and says the texture is completely different from other brands. “It’s a very forgiving paint. It’s bright and almost three dimensional,” he says. The paint also gives a nice matte finish, which allows the natural texture of the wood to shine through.

It’s debatable whether or not pigment sourced from the mine makes a true difference, but it is indisputable that the color red will continue to be synonymous with the Swedish countryside— a place often associated with coziness and childhood nostalgia.

Jansson argues that Falu red has iconic status. “The picture of a red cottage in the country in a rural environment—it stands for what I would call the Swedish dream,” he says.