You can get coronavirus twice — scientists explain why.

Recently, scientists reported the case of a Nevada man grappling with a new, and frustrating development in the story of Covid-19. The 25-year-old appears to have contracted coronavirus a second time after recovery. His is the first confirmed case of “reinfection” reported in the United States so far.According to the report, the patient first experienced symptoms like a sore throat, cough, fever, and headache in March, and tested positive for Covid-19 in April. By the end of April, his symptoms resolved and by May he had tested negative for coronavirus — twice.

However, on May 28, the patient started to feel sick again, this time reporting headaches, fever, cough, dizziness, diarrhea, and nausea. By June 5, he tested positive and showed signs of hypoxia – a low level of oxygen in the blood. The patient was then hospitalized, where he continued to receive oxygen. These findings were published in the journal The Lancet Infectious Diseases.

These demonstrate that Covid-19 infections may not provide every single person with absolutely bulletproof protection from becoming ill with the disease again. That’s not out of the ordinary, explains Stephen Goldstein, a post doctoral researcher and evolutionary virologist at Utah University Health. He was not involved in the study.

“We already know that no infection produces 100 percent protective immunity in 100 percent of people. This is even more established with respiratory infections,” Goldstein tells Inverse.

This paper, he says, also demonstrates that herd immunity sans-vaccine isn’t an option. It’s one of many scientific and ethical reasons herd immunity is impractical.

However, we’re not just relying on natural immunity to the virus: Ideally, we’ll soon have a vaccine that fortifies the immune system against Covid-19 and finally helps to end the pandemic.

This paper doesn’t derail that quest; it underscores how important it really is.

A timeline of this patient’s coronavirus symptoms. The Lancet Infectious Diseases

Can you get coronavirus twice?

Developing symptoms twice isn’t enough to prove reinfection. It was the genetic analysis that helps confirm this case. The study reports that the patient was infected with a different variant of the virus the second time around.

Importantly, the existence of that variant alone doesn’t prove that we need more than one kind of vaccine to fight coronavirus, as Aikiko Iwasaki, an immunologist at Yale noted in an accompanying commentary. Studies on the genetics of existing variants of SARS-CoV-2 suggest that its genetic diversity is actually quite low, implying the ones currently circulating shouldn’t be beyond the scope of a single vaccine.

Iwasaki writes: “There is currently no evidence that a SARS-CoV-2 variant has emerged as a result of immune evasion [evolving to get around the immune system]. For now, one vaccine [should] be sufficient to confer protection against all circulating variants.”

The paper’s last author Mark Pandori, director of The Nevada State Public Health Laboratory, agrees with Iwasaki’s assessment. However, he also cautions that it’s still hard to connect the dots between genetic changes to the virus, and how our immune systems fight it off.

“While the genetics are a useful way of ascertaining a re-infection, it is extremely difficult to know whether they translate to structural changes that would impact immunity,” he tells Inverse.

Goldstein suggests that we take a closer look at the immune system, not the virus itself. We don’t actually know how this person’s immune system reacted to the coronavirus the first time – a major limitation of this study. 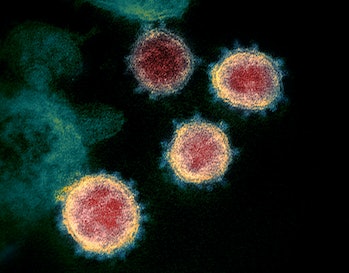 The structure of the coronavirus. NIH

“A small percentage of people will fail to mount a good immune response to any infection,” says Goldstein. “With tens to hundreds of millions of SARS-CoV-2 infections there will be a lot of these people even at a low rate, and these people probably are more susceptible to second infections.”

He suggests that reinfection within 40 to 60 days of the first infection may suggest that a powerful immune response was not mounted the first time around. The patient from Nevada tested positive twice within 48 days.

“But that’s merely a hypothesis at this point,” he cautions.

“A small percentage of people will fail to mount a good immune response to any infection.”

That’s why a vaccine is especially important — it is intended to make sure that the recipient does mount a strong immune response the first time around.

Pandori emphasizes that we can’t use this paper to predict how a vaccine might stimulate the immune system.

“Vaccination based immunity is different: it can be more focused, and boosted over time,” Pandori says. “So we await to see on that.”

The likelihood of reinfection – Goldstein suggests that the vast majority of people will probably mount a strong immune response the first time they encounter the coronavirus.

“It remains the case that the vast majority of recovered COVID-19 patients likely have strong protective immunity out to 6 months and some protection thereafter,” he says.

That said, these cases point out that strong, protective immunity isn’t always the case. Until there’s a vaccine that’s proven to make the immune system respond to the virus, people need to wear masks — antibodies, or no antibodies.

Methods:  A 25-year-old man who was a resident of Washoe County in the US state of Nevada presented to health authorities on two occasions with symptoms of viral infection, once at a community testing event in April, 2020, and a second time to primary care then hospital at the end of May and beginning of June, 2020. Nasopharyngeal swabs were obtained from the patient at each presentation and twice during follow-up. Nucleic acid amplification testing was done to confirm SARS-CoV-2 infection. We did next-generation sequencing of SARS-CoV-2 extracted from nasopharyngeal swabs. Sequence data were assessed by two different bioinformatic methodologies. A short tandem repeat marker was used for fragment analysis to confirm that samples from both infections came from the same individual.

Findings: The patient had two positive tests for SARS-CoV-2, the first on April 18, 2020, and the second on June 5, 2020, separated by two negative tests done during follow-up in May, 2020. Genomic analysis of SARS-CoV-2 showed genetically significant differences between each variant associated with each instance of infection. The second infection was symptomatically more severe than the first.

Interpretation: Genetic discordance of the two SARS-CoV-2 specimens was greater than could be accounted for by short-term in vivo evolution. These findings suggest that the patient was infected by SARS-CoV-2 on two separate occasions by a genetically distinct virus. Thus, previous exposure to SARS-CoV-2 might not guarantee total immunity in all cases. All individuals, whether previously diagnosed with COVID-19 or not, should take identical precautions to avoid infection with SARS-CoV-2. The implications of reinfections could be relevant for vaccine development and application.
–

—–
Right now, facts and science matter more than ever. That’s part of the reason for The Abstract, this all-new podcast from the Inverse staff that focuses exclusively on science and innovation. Three new episodes are released a week, and each covers one theme via two related stories. Each features audio of original Inverse reporting, where the facts and context take center stage. It’s hosted by the Tanya Bustos of WSJ Podcasts. Because we’re Inverse, it’s all true but slightly off-kilter. It’s made for people who want to know the whole story.  – Nick Lucchesi, executive editor, Inverse–

–
(For the source of this, and many other equally intriguing and important articles, please visit: https://www.inverse.com/mind-body/coronavirus-reinfection-united-states-explained/)
Tweet