Do you know who is considered to be the “father of robotics?” The word “robotics” was first coined by Isaac Asimov in 1941 but the concept has been around much longer. If you are thinking Leonardo da Vinci, you are close. Drawings left by Leonardo made around 1495, depict the first recorded designs of a humanoid robot but someone else got there before him. Concepts akin to a robot can be found as long ago as the 4th century BC when the Greek mathematician Archytas of Tarentum postulated a mechanical bird he called “The Pigeon” which was propelled by steam. The first person to actually build a programmable humanoid robot was Al-Jazari in 1206.

According to Wikipedia, Ibn Ismail ibn al-Razzaz Jazari (in Arabic:

a.k.a. Al-Jazari) was an Arab Muslim scholar, inventor, and mechanical engineer during the Islamic Golden Age (Middle Ages). While his birth and death dates vary with almost every article written about him, other details about his life and work are better known. Al-Jazari is not only known as the “father of robotics” he also documented 50 mechanical inventions (along with construction drawings) and is considered to be the “father of modern-day engineering.” The inventions he mentions in his book include the crank mechanism, connecting rod, programmable automaton, a humanoid robot, reciprocating piston engine, suction pipe, suction pump, double-acting pump, valve, combination lock, cam, camshaft, segmental gear, the first mechanical clocks driven by water and weights, and especially the crankshaft, which is considered the most important mechanical invention in history after the wheel. Not bad for a guy who lived 800 years ago!

Al-Jazari also noted a number of practical joke devices in his text. Some were trick drinking vessels that appeared to contain water but could not be emptied. Others looked empty but produced water when tipped over.

The History Channel is currently running “Ancient Discoveries: Machines of the East” which includes information about Al-Jazari. A DVD of this program can be checked out in the Parks Library Media Center or you can check the program listings to see when it is slated to re-run: http://www.thehistorychannel.co.uk/site/tv_guide/listings

The Parks Library also has the following related books:

The Book of Knowledge of Ingenious Mechanical Devices (this is a translation of Al-Jazari’s original text written in 1206)
Call number: TJ144 .J3913 1974

Science and Its Times: Understanding the Social Significance of Scientific Discovery (volume 2 has information on Al-Jazari)
Call number: Q175.46 S35 2000

A History of Engineering in Classical and Medieval Times
Call number: TA15 H54x, 1984 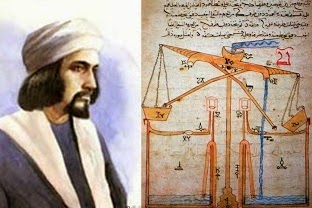 Islamic civilization is a pioneer in the field of technology automata, which is a machine that can run [on] its own (self-operating). Automata are often used to describe a robot or autonomous robots more specifically. The word comes from the Greek Automata automatos, which applies to the will of his own, moving on its own.

The word was used to describe the machinery moving non-electronic, specifically designed to resemble human or animal movement. Engine robots created by Al-Jazari in the form of a boat that is floating in a lake carrying four robotic music player.
–
–
(The source of this article, the balance of which is rather poorly translated, can be found at: https://islamic-study.org/the-father-of-robotics/)
–

Science and Technology in Islamic Spain