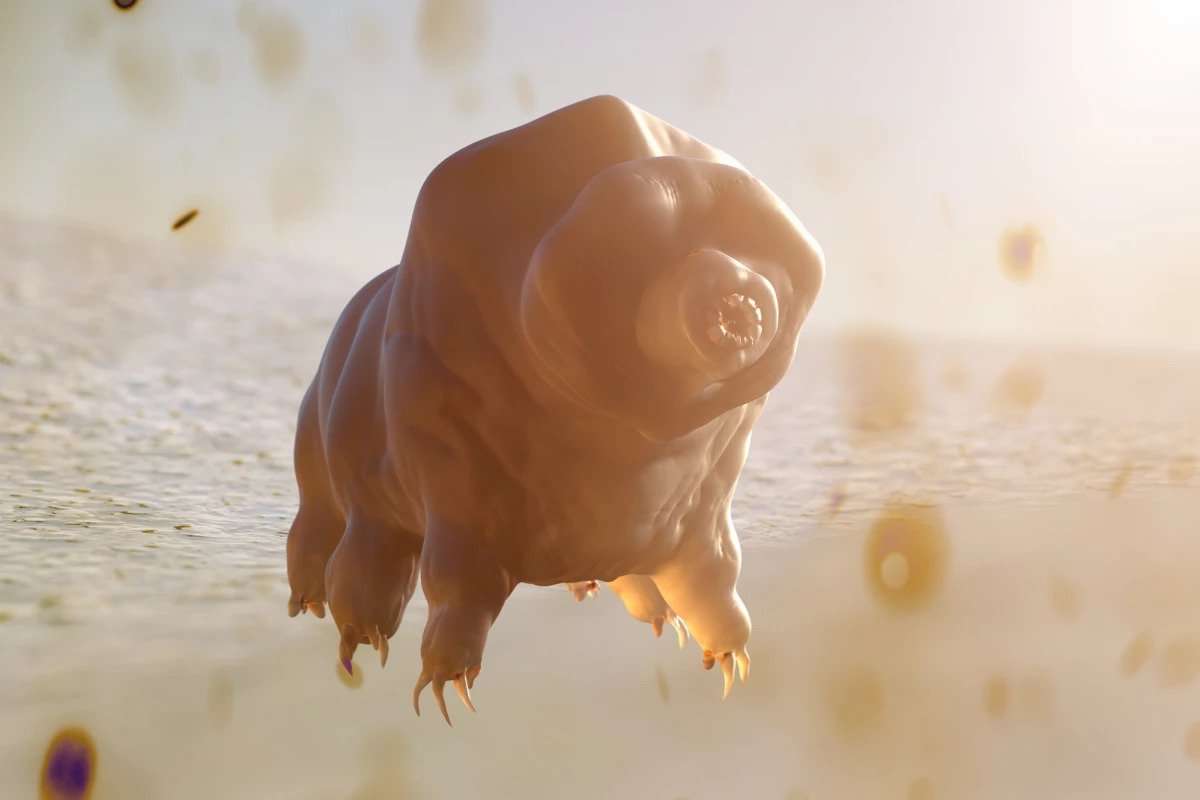 The tardigrade is known to be one of nature’s hardiest creatures, and scientists have just discovered a new species that uses a previously unknown tool to survive.  DenisSmile/Depositphotos
–
By Nick Lavars
2020 Oct 13
–

The tardigrade is one of nature’s toughest animals, using a unique form of hibernation to endure otherwise fatal conditions such as extreme heat and pressure, or even the vacuum of space. Scientists have now discovered a new species of tardigrade that expands this array of survival tools, employing a type of fluorescent shield to protect itself against lethal UV radiation.

Also known as water bears or moss piglets, tardigrades are microscopic critters that have come to amaze scientists with their incredible durability. They are thought to be one of the only species to have survived all of the five major extinction events, can withstand the crushing forces at the bottom of the ocean, and can get by without food, water or oxygen.

They do this by compacting their bodies in a way that reorganizes their internal organs, entering a state of deep suspended animation. This essentially freezes them and protects them from lethal threats, until conditions become safe for them to emerge from hibernation. So effective is this trick that one Harvard-led study in 2017 concluded that tardigrades might even live to see our Sun die.

Scientists at the Indian Institute of Science have been investigating the survival mechanisms used by tardigrades, gathering specimens from the area and subjecting them to extreme conditions, as reported by Science. In one of the experiments, the team exposed the tardigrades to a germicidal UV lamp at doses sufficient to kill bacteria and roundworms in minutes.

A tardigrade species called Hypsibius exemplaris held out a little longer, surviving around 15 minutes of exposure to the UV light, but another mysterious tardigrade species seemed to be immune. All of specimens from this reddish brown species survived the light, and were even treated with a dose four times as strong, with around 60 percent of them going on to live for a further 30 days.

This new and intriguing species was found living on a moss-covered concrete wall and is a part of the Paramacrobiotus genus. Further investigations using an inverted fluorescence microscope revealed that these reddish brown water bears actually turned blue when exposed to the UV light.

The scientists found that the reason for this is a set of fluorescent pigments beneath the skin that act as a shield, absorbing that otherwise-lethal UV light and turning it into benign blue light. The researchers were actually able to extract these pigments and transfer them to the Hypsibius exemplaris tardigrades and C. elegans earthworms to double their survival rate under UV light.

The team believes this new species of tardigrade may have evolved this neat UV-survival shield as a way of dealing with the relentless sunlight in tropical southern India.

The research was published in the journal Biology Letters.