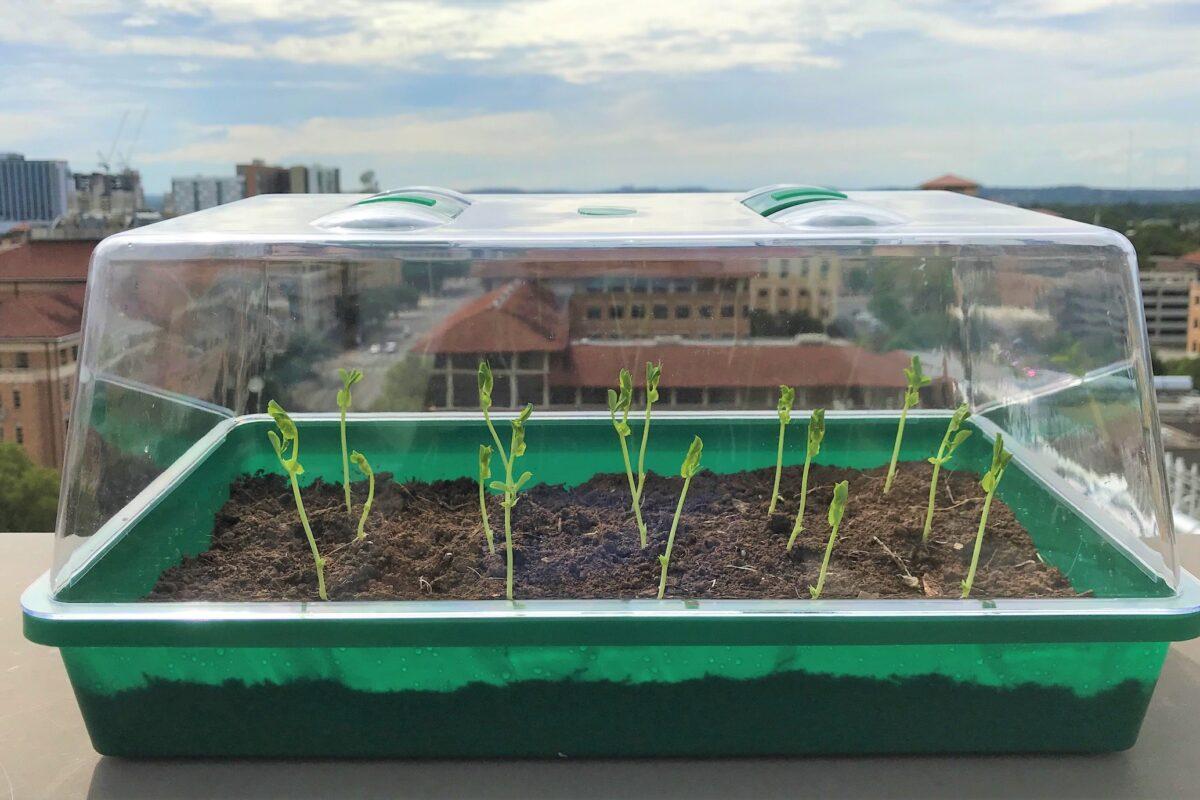 Radishes grow in the SMAG-soil, on the roof of the Cockrell School’s Engineering Teaching Center building at UT Austin.  The University of Texas at Austin
–
By Ben Coxworth
Generally speaking, you don’t see a wide variety of crops being grown in arid regions – especially when irrigation isn’t practical and/or affordable. That could be about to change, though, with the development of what’s being described as “self-watering soil.”

Created by engineers from The University of Texas at Austin, the material consists of a 1:3 weight-ratio combination of hydrophilic (water-attracting) hydrogels and natural sandy soil. It’s known as SMAG-soil, with SMAG standing for “super moisture absorbent gels.”

The gels and sand are initially ground together, with water slowly being added during the grinding process. The mixture is then dried in a vacuum oven at a temperature of 90 ºC (194 ºF) for 12 hours, forming into a solid clump. That clump is then ground again, with the loose SMAG-soil being the end result.

Once the soil has been placed outdoors in a field, the gels absorb water from the relatively humid, cool nighttime air. A single gram of the soil can pull in around 3 to 4 grams of water. In the hotter daytime temperatures, the gels release that stored water into the rest of the soil mixture, where it can be taken up by the plants’ roots.

For certain crops, it is claimed that 0.1 to 1 kg (0.2 to 2.2 lb) of the SMAG-soil can provide enough moisture to irrigate about 1 square meter (10.8 sq ft) of farmland. And as an added bonus, water that evaporates from the soil during the day serves to keep the atmosphere around the crops more humid, so there’s more water that can be absorbed from the air at night.

In tests performed in outdoor planter boxes, it was found that after four weeks, the SMAG-soil retained about 40 percent of the water that it started with. By contrast, a control box of regular sandy soil retained only 20 percent of its water after just one week.

Additionally, a batch of radishes planted in the SMAG-soil all survived for 14 days after being irrigated once at the beginning of the period. Radishes that were planted in plain sandy soil, on the other hand, all died within two days of the end of an initial four-day irrigation period.

“Most soil is good enough to support the growth of plants,” says postdoctoral researcher Fei Zhao, who led the study along with Xingyi Zhou and Panpan Zhang. “It’s the water that is the main limitation, so that is why we wanted to develop a soil that can harvest water from the ambient air.”

Down the road, the same basic technology could also be used for applications such as cooling solar panels and obtaining drinking water.

A paper on the research – which was overseen by Assoc. Prof. Guihua Yu – was recently published in the journal ACS Materials Letters.

Source: The University of Texas at Austin