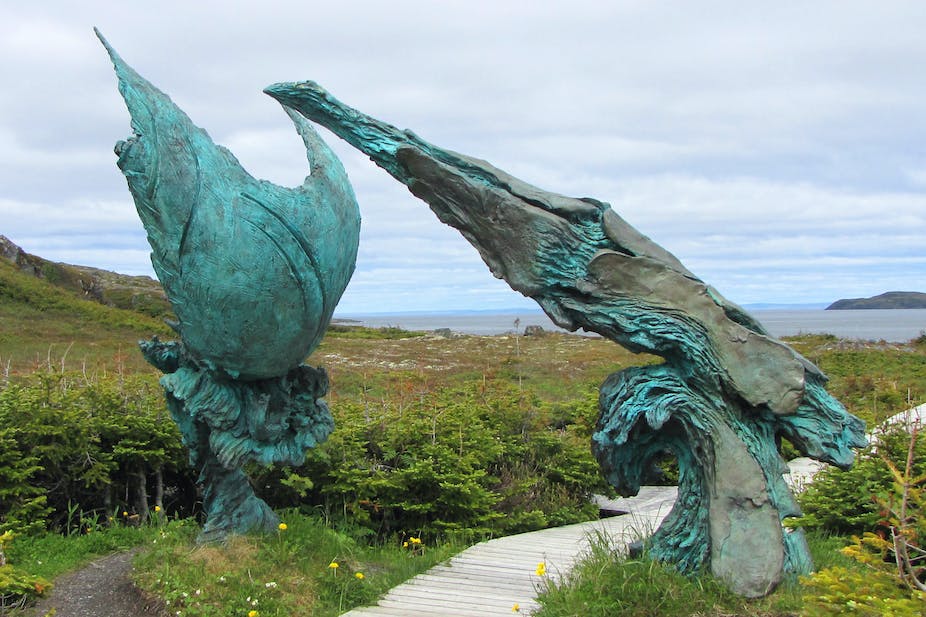 ‘The Meeting of Two Worlds,’ a sculpture at L’Anse aux Meadows, commemorates the meeting of Vikings and Native Americans around the year 1000. D. Gordon E. Robertson/Wikimedia Commons, CC BY-SA
–

Author Valerie Hansen
Professor of History, Yale University
2020 Jun 11
–
Viking ships touched down on the Canadian island of Newfoundland around the year 1000, at what is now the archaeological site known as L’Anse aux Meadows.For the first time, the two sides of the Atlantic Ocean were connected.

When the Vikings landed, the indigenous people immediately started to trade with them. The Vikings describe this initial encounter in “Eirik’s Saga,” an oral epic written down after 1264 about the Norse voyages across the North Atlantic from Greenland to today’s Canada.

The locals brought animal pelts to trade, and in exchange, the Vikings offered lengths of red-dyed woolen cloth. As their supply of cloth began to run short, the Vikings cut the cloth into smaller and smaller pieces, some just as wide as a person’s finger, but the locals wanted the cloth so much that they continued to offer the same number of pelts in trade.

All over the world at this time, the allure of novel goods led to 1,000 years of trade and interactions among people from different places, in what is now known as globalization. They are the subject of my recent book “The Year 1000: When Explorers Connected the World – and Globalization Began.”

The rapid spread of the coronavirus and the resulting social and economic shutdown around the globe have changed everyone’s understanding of the dangers of globalization, including mine. A society that can get only certain necessary items from a trade partner is vulnerable as a result of that dependence. In the past, there were built-in limits in global trade that prevented earlier societies from becoming totally reliant on outside goods. Those limits no longer exist today.

A worldwide network of pathways

About 10 years after their arrival at L’Anse aux Meadows, the Vikings abandoned their settlement, most likely because of conflicts with the local inhabitants. But they continued to sail to Canada to get lumber to bring back to Greenland and Iceland, where trees were scarce.

Similar encounters around the world took place when Muslim traders and missionaries went from the Middle East to West Africa around 1000, when speakers of Malayo-Polynesian languages sailed from the Malay peninsula west to Madagascar, settling there by 1000, and across the Pacific to Hawaii and Easter Island between 1025 and 1290. A whole new system of maritime and overland routes opened up as a result of these expeditions. In the year 1000, an object or message could travel all the way around the world for the first time.

In the year 1000, of course, there was no electricity or steam power, but mass production was still possible.

In China’s Fujian province, dragon kilns, which stretched over 300 feet up the sides of hills, were fueled by wood, coke or coal. Producing between 10,000 and 30,000 vessels in a single firing, these kilns employed hundreds, possibly thousands, of craftsmen, who worked full-time.

Individual potters crafted vases, bottles, bowls and plates on their potter’s wheels and then fired them to higher temperatures than any other kilns in the world. The glazed pots were the iPhones of their day, goods desired by everyone because they were both beautiful and easy to clean.

Archaeologists have excavated Chinese wares in coastal ports in Kenya, Tanzania and Comoros along the world’s most heavily traveled sea route at the time, which connected East Africa, the Middle East and China.

Chinese ceramics were among the the most highly coveted trade goods of their day, but Chinese potters never succeeded in dominating foreign markets in the way that modern exporters can.

Two important factors prevented them from doing so. First, even though Chinese kilns could produce thousands of pots in a single firing, production was not sufficiently high to flood the markets of other countries. Second, ship transport in the past was much less reliable than modern transport today.

Historically, ships could be blown off course during storms or sink when they ran into rocks. The uncertainties of transport limited the amount of goods reaching foreign ports. My research has revealed that China’s export ceramics never overwhelmed local manufacturers, who copied Chinese jars and pots.

For instance, archaeologists digging in the modern city of Shush in Iran excavated local knockoffs of Chinese pots. The imitations were ingenious, but inferior. Because they had been fired at much lower temperatures, they were much more fragile than Chinese pots, and the glazes are not smooth. Despite their defects, local copies have surfaced at archaeological sites alongside imported vessels from China at multiple Indian Ocean ports, showing that local manufacturers were able to innovate and hang onto market share. Even if the supply of Chinese ceramics was cut off, local consumers could obtain the goods they needed.

When supply lines have been cut off in the past, people have managed to find new sources of the goods they desired. The clearest examples were during World War I and World War II. When it became impossible to import something from enemy powers – and this could happen overnight – ingenious merchants located new supplies or created an equivalent such as synthetic rubber or the ersatz teas Germans blended from herbs when they could not access real tea.

Today, the vast capacity of cargo planes and modern ships means that they can supply a community with entirely imported goods and eliminate all local production. The coronavirus pandemic has made Americans realize how dependent they are on foreign countries for key goods.

In 2018, for example, a confidential U.S. Department of Commerce study concluded China supplied 97% of all the antibiotics Americans consumed. Ceramics aren’t as important to people’s health as antibiotics, but modern imports of all kinds can overwhelm local manufacturers today in a way that was not possible in the past.

That’s the challenge for the future: figuring out how to tame globalization so that local producers can survive alongside manufacturing superpowers. The past gives us reason to be optimistic: When supply lines have been cut off, people have managed to come up with alternative sources.

[Editor’s note: One might also consider the trade between the Ainu native tribes of what is today northern Japan, with the Tlinget and Haida tribes of northwest North America.]

Valerie Hansen received funding from the Institute of Advanced Study at the University of Birmingham in the United Kingdom, Xiamen University in China, the Collège de France, and Yale University.

A note from our editor’s mother

My daughter Beth leads the team of experienced editors working with experts to share fact-based journalism with readers like you. If you read this website, you know what good work they do. So please help them raise up the voices of scholars to drown out the loud voices shouting lies (she was never a shouter growing up). Thank you!

Write an article and join a growing community of more than 117,200 academics and researchers from 3,789 institutions.

–
–
(For the source of this, and many other equally intriguing articles, please visit: https://theconversation.com/globalization-really-started-1-000-years-ago-140219/)