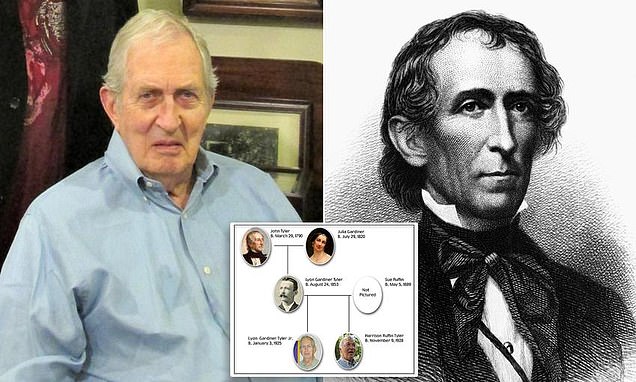 –
These days Harrison Ruffin Tyler, 91, is allowed only one designated visitor. Those are the pandemic rules at the nursing home in Virginia where he lives. So in September, when his last living sibling, brother Lyon Gardiner Tyler Jr. died at 95, he found out about it on the daily visit from his daughter-in-law.

Due to a series of mini-strokes starting in 2012, Harrison lives almost without time. It would be quite a change for anyone, but it’s particularly so for someone like him, who grew up steeped in family history. Harrison was raised in his grandfather’s hunting lodge; his grandfather — John Tyler, the 10th president of the United States — was born in 1790.

Because his second wife, Julia Gardiner, was so much younger, Tyler was still fathering children throughout his sixties. One of those children was Lyon Gardiner Tyler Sr., born in 1853, nearly a decade after his father’s term in office. Lyon Sr. ended up following a similar domestic path, being widowed and then remarrying to a much younger woman. They had Harrison when he was 75 and she was 39.

Harrison is also related to William Henry Harrison, the president his grandfather replaced, hence his first name. And he’s related to Pocahontas — “like 10,000 other people,” William said — but because of his unique bridge to the nation’s past, “there’s a high likelihood that he’s the closest living genetic relation to Pocahontas in the world.”