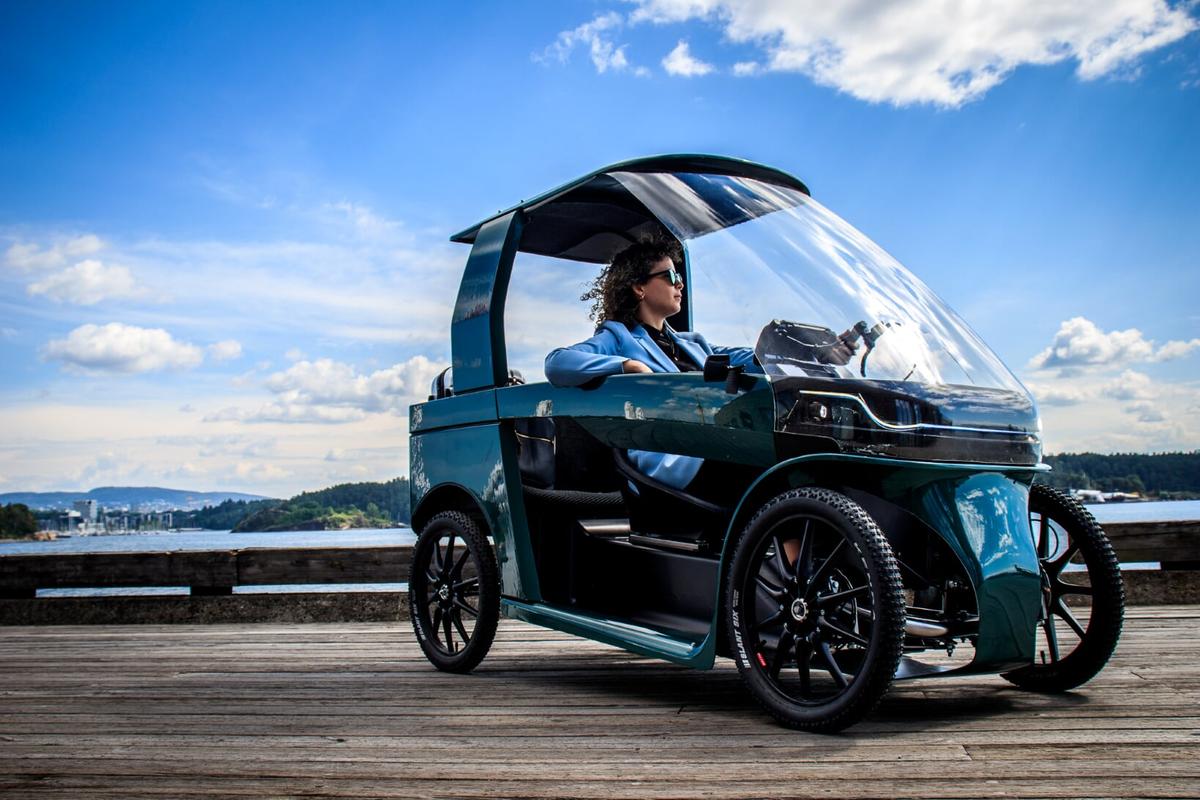 The CityQ has four 20-inch wheels … but no chain, belt drive or derailleur.  CityQ
View 3 Images
–
By Ben Coxworth

Created by Norwegian company CityQ AS, the vehicle is pedalled like a bike, with a 250-watt motor augmenting the rider’s pedalling power. However, the pedals aren’t directly linked to the drivetrain. Instead, the CityQ features what is simply described as “a software-managed drivetrain – like you find in electric cars.”

We’re still waiting to hear back about what that entails, although we suspect it may be something like the setup utilized in the Mando Footloose ebike – it uses an alternator to convert the rider’s pedalling power into electricity, which is stored in a battery that powers the motor.

Because the motor is amplifying the rider’s pedalling power instead of just mirroring it, though, the battery still needs to be pre-charged from an outlet. In the case of the CityQ, one ~5-hour charge of the vehicle’s two batteries is said to be good for a range of 70 to 100 km (43 to 62 miles).

According to its designers, it legally qualifies as an ebike, meaning that it can be driven in bike lanes and other car-free areas. It also doesn’t require a driver’s license to operate.

There’s currently no word on specs such as brakes, suspension and lighting. That said, its electronic drivetrain is claimed to enable features such as automatic gearing, a reverse gear, regenerative braking, a heavy cargo mode and cruise control.

The CityQ is available now for preorder via the company website, with deliveries expected to commence sometime this year. It is priced at €7,450 (about US$9,093), and can be seen in action in the video below.

CityQ the ebike of the future
–

Ben Coxworth
Based out of Edmonton, Canada, Ben Coxworth has been writing for New Atlas since 2009 and is presently Managing Editor for North America. An experienced freelance writer, he previously obtained an English BA from the University of Saskatchewan, then spent over 20 years working in various markets as a television reporter, producer and news videographer. Ben is particularly interested in scientific innovation, human-powered transportation, and the marine environment.
–
13 comments
Sign in to post a comment.
Please keep comments to less than 150 words. No abusive material or spam will be published.
–
guzmanchinky January 8, 2021 01:11 PM
3 feet wide, it won’t be allowed on US bike lanes. Maybe Europe’s laws are different in that regard?
–
nick101 January 8, 2021 10:26 PM
It doesn’t really need 4wheels, 3 would do. 2 at the front, one at the rear.
–
Username January 9, 2021 09:29 AM
Hardly protected from the elements. I’m not sure what the point of that “door” is.
–
Michael son of Lester January 9, 2021 10:03 AM
They are too big for bike paths or sidewalks, and on the roads they are too small and slow. Picture being in one of these when a guy comes up behind you with a Ford F150. A guy late for a meeting and he can’t get around you because of oncoming traffic. Can you say road rage? Drive one of these on a busy street and you can expect to be eaten alive. Oh, and this is also true in Europe.
–
Nobody January 9, 2021 03:47 PM
Certainly not car like comfort with those hard seats. You will roast in the sun and freeze in the cold. Getting half wet with the open sides isn’t much better than getting all wet on a regular bike. Pedaling any heavy electric bike with a dead battery is gruesome and they don’t weigh 150 lbs. Everyone I know with an electric bike has given them up after a few months and the novelty wears off. $9,000 should almost buy a nice electric car not a four wheeled bicycle. Are you going to have to park on the street or a bike rack???
–
Parkcityite January 10, 2021 12:02 AM
There are no consistent rules regarding ebikes much less this type of pedal assist vehicle. I think most bike riders would be pretty putoff dealing with this in a bike lane.
–
Lee Bell January 10, 2021 01:06 PM
250 watts? That thing doesn’t even have enough power to get out of it’s own way! What’s the max speed? about 10 mph? Maybe? Only on a flat surface? It is nice looking though for what it is but it definitely needs more power. I would be afraid to even try to cross the street in that.
–
Lee Miller January 11, 2021 02:14 AM
250 watts is crazy LOW power. I have an ebike mountain bike with an electric mid drive motor with 1500 watts and it decently powered. It is not powerful by any means at 1500 watts. But this little car with 250 is going to be as powerful as a baby stroller. You’d be far better off with (2) mid drive motors on each rear wheel which would yield 3,000 watts. It would be a 3,000 watt pedal assist baby e-car. Anything less is a slug.
–
Glen Aldridge January 11, 2021 04:14 AM
You missed the most obvious competitor to the City Q with Formula Racing in it’s DNA – https://www.youtube.com/watch?v=aK8snftUtPk . With Honda, Toyota & worldwide shipping companies already putting these on our roads, the days of sitting in traffic jams or not being able to find a parking spot means people will have a sensible choice riding these in city centers.
–
BlueOak January 11, 2021 09:03 AM
Interesting but the roads and bike lanes in Europe must wildly different than in the US… to tolerate this too small/slow for road use, whilst also too wide for polite bike lane/path use, vehicle.

In the US, this vehicle would be relegated to closed communities with paved golf cart paths.