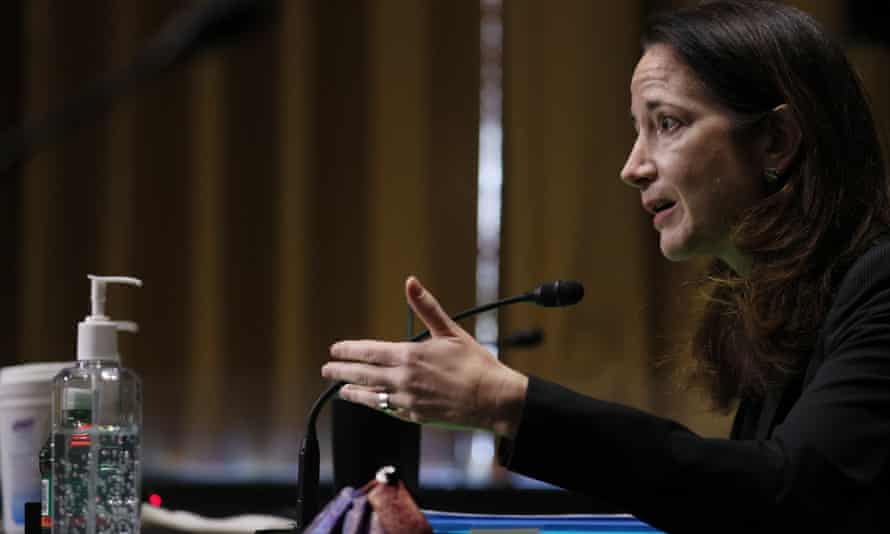 By Julian Borger in Washington
Last modified on 2021 Jan 26
–
Avril Haines, who now oversees all 16 US intelligence agencies, is unlike any of the spies who came before her, and not just because she is the country’s first female director of national intelligence.

She is also the first intelligence chief to have to make an emergency landing while trying to cross the Atlantic in a tiny plane; the first to take a year out in Japan to learn judo; and surely the first anywhere in the world to have owned a cafe-bookstore that staged frequent erotica nights.

“What’s interesting about Avril is that she’s just a voraciously curious person who will throw herself into whatever she’s doing,” said Ben Rhodes, Barack Obama’s former speechwriter and foreign policy aide who is a close friend of Haines.

The Haines backstory makes her an unlikely spy, but proved no obstacle to getting bipartisan support. She was the first Biden nominee to be confirmed, with 84-10 Senate vote on Wednesday night.

David Priess, a former CIA official now chief operating officer at the Lawfare Institute, said her unusual life story is an advantage in the world of espionage.

“She has to be able to understand and to lead everyone from analysts to intelligence collectors to engineers to pilots to disguise artists to accountants,” Priess said.

“Having that diverse set of experiences very much helps her to lead the very diverse and disparate intelligence community.”

Haines’s period of lifestyle experimentation anyway ended decades ago, in 1998 when she started a law degree. Since then she has been a legal counsel in the Senate, state department and White House, the deputy director of the CIA and deputy national security adviser.

Senate Republicans, who had confirmed her Trump-appointed predecessor, John Ratcliffe, despite his lack of any significant experience in intelligence and his exaggeration of his previous brushes with security work, had few excuses to oppose her.

The main source of scepticism comes from human rights activists, over whether she might be too much of an insider, with too much baggage. She redacted the report on torture – some argue over-redacted it – and she codified a set of procedures and rules for the use of drone strikes in the assassinations of terror suspects.

There is little in Haines’s early life to suggest a trajectory towards national security and intelligence. She grew up in an apartment on Manhattan’s Upper West Side, the daughter of a biochemist, Thomas Haines and a painter, Adrian Rappin. Rappin fell seriously ill with lung disease when Avril was 12, and she spent four of her early teenage years as her mother’s principal carer until her death in 1985.

According to an account in Newsweek, the family was forced to give up their apartment under the relentless pressure of medical costs, and had to move around the homes of friends and relatives. By the time she left high school, the teenage Haines was so spent, she deferred college for a year and instead went to study judo at Tokyo’s Kodokan Institute, where she rose to a brown belt.

On her return to the US, she studied theoretical physics at the University of Chicago and to help make ends meet, worked as a car mechanic, rebuilding car engines, and while at university, she was knocked off her bicycle by a car and left with a serious injury that continues to dog her.

Undeterred, she plunged into her next dream project, restoring a second-hand plane and flying it to Europe. With her flight instructor she found a 1961 Cessna and rebuilt its navigation, communication and other electronic systems, before taking off from Bangor, Maine, with long-distance fuel tanks strapped to the fuselage.

Not long into the flight, however, the Cessna began to take on ice and then both engines stopped. They had to glide low over the Labrador Sea, and were lucky to find a small airfield on the Newfoundland coast, where they made an emergency landing, and where they were looked after for a week in the local community until the weather improved. Haines’s friends confirmed they believed the Newsweek account of the adventure to be accurate.

One upshot of the failed adventure was that Haines married her instructor, David Davighi. They moved to Baltimore, and though the initial plan was for her to go back to school and for him to work as a pilot, another inspiration took them in a different direction entirely.

They saw a newspaper advertisement for a bar-brothel that had been seized in a drugs raid and was being auctioned off. They bought it, selling the Cessna and going into debt to refashion it as Adrian’s Book Café, in honour of Haines’s mother.

She defined the genre to the Baltimore Sun in 1995 as “everything that’s repressed, guttural, instinctual, chaotic and creative”.

The bank offered more launches to expand the franchise but by then, Haines had changed direction again. Community organising had got her interested in the law and in 1998 she enrolled at Georgetown University, where she came to specialise in human rights and international law.

To Haines’s detractors, those were ironic choices in light of her later associations with two of the biggest stains on the US record after 9/11: torture and drones.

Much of her work in the Obama national security council involved writing up a “playbook” which codified criteria for drone strikes, which the administration relied on increasingly to target leading members of terrorist groups.

Her former colleagues however, insist that Haines played an important role in limiting the use of drones, challenging top officials in the Obama administration to prove that a target represented a genuine threat.

“Avril really spearheaded the efforts that impose limits on the use of drones, the standard for avoiding civilian casualties, a more controlled process for determining who could be targeted,” Rhodes said.

“Many people didn’t want those rules written down, because they thought by specifying things that would limit their options,” another former senior official, who did not want to be named, said. “I’ve seen her speak to power over and over and over again, in situations where I’ve seen many other people chicken out.”

There are other criticisms of Haines’s tenure as deputy CIA director. She arrived in 2013 when the Obama administration was still bogged down in dealing with the aftermath of its predecessor’s use of torture against terror suspects.

In 2015, Haines had to decide what to do about CIA officials who had hacked into the computers of Senate intelligence committee staffers who had been compiling a comprehensive report on torture, and even drummed up spurious criminal cases against them. She overrode the advice of the CIA inspector general and recommended against disciplinary action.

“No one was held accountable for that and Haines apparently thinks that is an OK resolution to the matter,” Daniel Jones, the Senate report’s lead author who was one of the targets of the CIA reprisals. “Many people have nothing but great things to say about her, but that is a massive blind spot, which is kind of unforgivable.”

When the Senate report by Jones and his team was finished, it was Haines who had the job of redacting it. By the time she was done, only 525 pages of the 6,700 total were released.

“When Obama came into office he signed an executive order that explicitly stated that you could not classify information that was simply embarrassing,” Jones said. “I feel strongly that she advocated for redactions that were not consistent with Obama’s executive order.”

Haines’s role in the torture report, on the other hand, has probably strengthened her standing in the intelligence community, where she might otherwise be viewed as an outsider without experience in the field.

What counts even more, though, is her previous relationship with the president, something none of her predecessors had. That alone could make her one of the more powerful directors of national intelligence.

“I was in the PDB [president’s daily brief] every morning with her for the last couple of years [of the Obama administration] when she was deputy national security adviser, and so was Biden,” Rhodes said. “Presumably now as DNI, she could be the person briefing Biden every morning on intelligence matters.”
–
–

With the inauguration of Joe Biden and Kamala Harris, American democracy has a chance to reset. The new administration has an historic opportunity to address the country’s deepest systemic challenges, and steer it toward a path of fairness, equality and stability.

–
–
(For the source of this, and many other equally important and intriguing articles, please visit: https://www.theguardian.com/us-news/2021/jan/26/avril-haines-director-of-national-intelligence/)