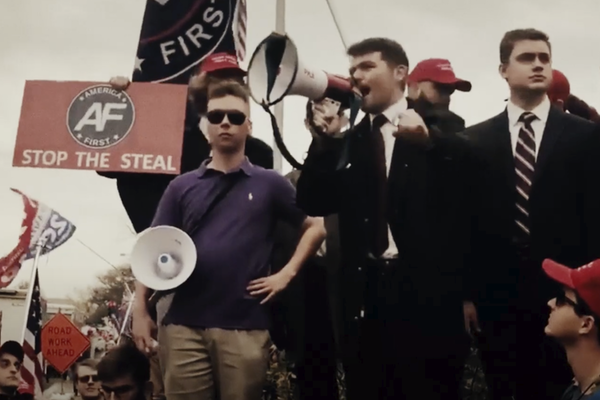 James Morone is a professor at Brown University. His most recent book, published this Fall, is The Republic of Wrath: How American Politics Turned Tribal from George Washington to Donald Trump (Basic Books).
–

By James A. Morone
2021 Jan 24
–
President Donald Trump’s brazen flirtation with white supremacy finally blew up in the January 6 siege of Capitol Hill. But as he clasped onto white nationalism –famously directing from the presidential debate stage “Proud Boys: Stand back and stand by”— few in his party voiced objections. How did the Republicans get to such a parlous place? The answer begins back in 1964 – the election that defined the modern GOP.

The earthquake began during the Democratic primaries. George Wallace, a pugnacious segregationist from Alabama, went to Wisconsin and challenged President Lyndon Johnson with a truculent, bluntly racist campaign. Wallace savaged the Civil Rights Act –which was then facing a segregationist filibuster in Congress— as a foreign plot designed to rob hard working white Americans of their jobs, their neighborhoods, and their way of life. He warned white people of the looming danger, chanted “law and order” like a mantra, and insisted that he’d run right over any protester who tried to block his car.

The media treated it all as a joke – Democratic Governor John Reynolds of Wisconsin, running as a surrogate for President Lyndon Johnson, dismissed Wallace as “a kook.” But the southerner’s campaign caught fire in white working-class neighborhoods and on primary day the kook stunned everyone by taking 266,000 votes –a third of the total against a sitting president. He followed that with a powerful showing in Indiana and a near win in Maryland. Wallace exposed a disquieting reality: civil rights kindled white anxiety in the North as well as the South. His provocations during that campaign sound uncannily like the plaints Donald Trump rode to the White House a half century later.

Back in 1964, Democratic leaders squelched George Wallace, but the racist demons he unleashed were leaking into the Republican party. Northern liberals had long run the GOP’s conventions. They dominated the presidential campaigns and, in the spring of 1964, they saved the Civil Rights Act with the votes that broke a three-month Senate filibuster – Time magazine judged the final legislation “[Republican Senate Leader Everett] Dirksen’s bill, bearing his handiwork more than anyone else’s.”

However, six weeks later, a very different faction seized control of the Republican national convention and nominated Barry Goldwater, a fervent conservative who had been one of just six Republican nays against the civil rights act. He tagged it a “landmark in the destruction of a free society.” Goldwater preached the antigovernment gospel like no presidential candidate had done in modern times.

He had always opposed segregation, but now he stayed mum as segregationists swarmed into his presidential campaign. The handful of black delegates at the 1964 Republican convention, including Jackie Robinson, the baseball star, published harrowing stories about what they encountered—racial epithets, taunts, flying bottles, and threats of violence. “I had a better understanding of how it must have felt to be a Jew in Hitler’s Germany,” summed up Robinson on the front pages of the Black press. [Editor’s Note: Episcopalian Goldwater’s paternal grandfather, Michel Goldwasser, a Polish Jew, was born in 1821 in Konin, then part of Congress Poland, and later settled, as a merchant, in Arizona Territory in the mid-1800’s.]

The media bluntly portrayed the Goldwater campaign that roared out of the convention as a white resistance movement. “When Senator Barry Goldwater went campaigning in the south,” reported commentator Walter Lippmann, “his purpose [was] … to inaugurate the so-called southern strategy.” The strategy remade American politics by uniting conservative Republicans from the north with conservative Democrats in the south. Party leaders did what they had to do to accommodate segregationists and white backlash – just as Democrats had once done. Republican moderates, like George Romney of Michigan, blasted the racial “hate mail” circulating through the campaign. In a private, unpublished letter, Romney upbraided Goldwater for turning a blind eye to the racists that swarmed into his coalition. “Your strategists proposed to make an all-out attempt for the Southern white segregationist vote,” complained Romney, and to “exploit the so-called white backlash in the North.” At the time, Goldwater rejected the criticism from a fading Republican liberal.

Instead, honest conservatives like Goldwater simply looked the other way as ardent segregationists crawled into the rising coalition. By the next presidential election, in 1968, Richard Nixon smoothly adopted the southern strategy – he dropped the crude racism and replaced it with winks and whistles. The Republicans morphed into the white people’s party. From that time to the present, the Republicans won, on average, 61 percent of the white vote in presidential elections. At first, that delivered landslide after landslide. Republicans won five of the six presidential elections between 1968 and 1988 averaging a whopping 450 electoral college votes (out of 538). Only the anomalous Watergate election broke their dominance.

But the Democrats unwittingly legislated a limit to the white party’s domination. After winning the 1964 election – the last hurrah of the New Deal-Great Society Democrats—the Johnson Administration introduced a sweeping immigration reform. Liberals had denounced the tight limits, passed in the 1920s, as just another form of racial discrimination. Now, they pressed, to align immigration law with “the spirit of . . . civil rights law,” as Vice President Hubert Humphrey put it, and flung open the golden gates. No one foresaw the consequences — 59 million people arrived in the next four decades.

Roughly two thirds of the new Americans moved (or, were pushed) to the Democrats. As a result of the immigration, the white vote began to fall – from 90% of the electorate (in 1976) to 81% (in 2000) to just 68% by 2020. As the demographics evolved, Democrats began to dominate the popular vote in presidential elections – they have now won five out of the last eight times stretching back three decades.

Republicans face a stark choice. They can actively recruit the so-called minority populations. Or –the Trump alternative– squeeze still more anxious white votes out of the electorate. What had once been done with little winks now requires Trump’s bullhorn.

The 2020 results hint at a Republican path back to the future. This time, Latinx voters helped save the Republicans in Texas and Florida (while also being crucial to Biden wins in Arizona and Nevada). The latest shifts –some Latinos toward Trump, suburban whites to Biden– were small. But they beckon Republicans toward a different kind of coalition that, at long last, turns away from the legacy of 1964. After all, the Party of Lincoln once dominated the black vote, handily won Asian-Americans (as late as 1996) and managed forty percent of the Latinx vote. The choice Republicans make, as they search for a winning coalition, will shape, not just their party’s future but the health of our multi-cultural democracy itself.