Home
NEW MEXICO WEIRD
&
News
&
WEIRD FACTS
As a ‘Zoom boom’ brings the wealthy to Santa Fe, locals are getting priced out 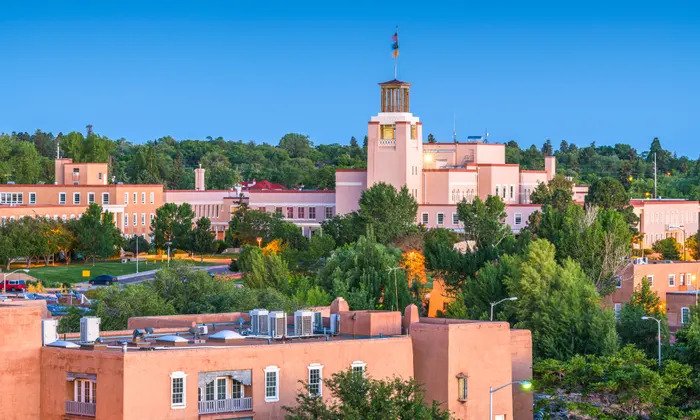 Santa Fe, New Mexico, has one of the tightest rental markets in the US. Photograph: Sean Pavone/Alamy
–

By Cody Nelson in Santa Fe
Last modified 2021 Jan 29
–
Shawna Martínez moved to Santa Fe to attend school in 1989 and never left. Working at Hotel Santa Fe for nearly 30 years, she has had a front seat to the explosive growth of this tourist town in past years.

But late last year, on Martínez’s 50th birthday, her landlady delivered news that she was selling the property where Martínez rents a small, two-bedroom casita for $900. Martínez’s lease wouldn’t be renewed and she would need to move. 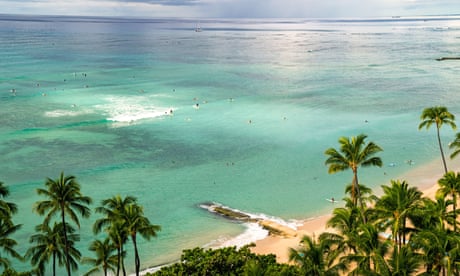 Remote workers are flocking to Hawaii. But is that good for the islands?
Read more

Finding a place to call home in Santa Fe in 2021, however, requires navigating a market with abysmal rental vacancy rates and skyrocketing home prices. “For $900 in Santa Fe, you find a studio with a hot plate and a mini fridge,” Martínez said.

Already one of the tightest rental markets in the US with vacancy rates near 2%, residents of New Mexico’s capital city face an acute crisis from the Covid-19 pandemic’s ravaging of the city’s tourism-based economy as well as competition from an influx of newcomers crowding the housing market.

The so-called Zoom boom has brought remote workers seeking to stretch their dollar in relatively affordable places, while gaining proximity to nature and open spaces, to small and mid-sized cities across the mountain west. But they are often forcing locals out of their home towns entirely, at times exporting their former cities’ housing crises on to these mountain towns. [Editor’s Note: Many newcomers are also trying to escape various climate disasters which seem to be hitting the rest of the country more frequently than ever.]

As Santa Fe leaders assess options for addressing their housing crisis, activists and some policymakers say part of the solution may lie in making second-home owners and Airbnbs pay for the problems they helped create.

“We have an obligation to see that people with less means are still part of the picture and are taken care of,” said Signe Lindell, a Santa Fe city councilor and the mayor pro tempore. “And housing is a really basic need.”

Lindell said Santa Fe has made some progress, with about 500 new or upcoming housing units affordable for people earning less than 60% of the area median income. However, she said, “my sense is that it’s not nearly enough.”

The Santa Fe area is short more than 7,300 rental units, according to the Santa Fe Association of Realtors’ 2020 housing report. Between 2017 and 2019, the city’s average rent topped $1,000, the report found, an increase of nearly 12%. Average rents are likely even higher today.

Buying a home isn’t feasible for many long-term residents, either. Last summer, as Santa Fe became a refuge for many wealthier remote workers to flee larger cities amid the pandemic, the county’s median home price passed $500,000 for the first time ever. The median household income in this city of 85,000 people was less than $58,000, per 2019 census data.

In addition to people buying second homes and displacing locals, the mass conversion of houses and apartments into Airbnbs and other short-term rentals in recent years has likely been responsible for about 20% of Santa Fe’s housing cost increases, according to a 2019 study from Homewise, a housing organization. That year, there were more than 1,400 short-term rentals in the city, a number that was growing by 50% a year.

“It’s upsetting because with people with money, people from California or Texas or wherever, come here and buy up the property and the homes,” said Jolene Eustace, an artist and former Santa Fean who is hoping to return to the city if she finds an affordable place. “We don’t have a chance.”

One of the tools the city is eying as it looks for solutions is the Affordable Housing Trust Fund, a fund that helps with everything from rental assistance for low-income Santa Feans to affordable housing development to homeownership assistance.

Daniel Werwath, the executive director of New Mexico Inter-Faith Housing, has been a leading advocate for the housing trust fund and finding new ways to finance it. The trust, he said, helps insulate housing resources from changes in political priorities and market fluctuation like the economic crash caused by Covid-19.

“I just keep thinking,” Werwath said, “how would March of 2020 gone down differently if we had $3m sitting there in our housing trust fund to just do immediate rental assistance?”

If housing advocates like Werwath get their way, the trust will soon get new funding mechanisms to reach that amount or more without making cuts to other city services.

Currently, the trust accrues much of its funding through fees paid by developers, which means its funding can dry up in times of economic downturn. The city of Santa Fe’s affordable housing director, Alexandra Ladd, said diversifying how the trust is funded could help it become more useful.

“It’s not a panacea, it’s not going to end all of our problems instantly. But I think right now, what we struggle with is that the trust fund has various revenue sources, but they all depend on development,” Ladd said. “And so, right [now], coming out of a recession, there’s no development, so there’s no revenue.”

A new report from the Santa Fe Housing Action Coalition, of which Werwath is a leader, found millions of dollars annually of new potential funding sources for the trust. One is adding a real estate transfer tax, which could bring the trust more than $1.5m a year. Attaching a small fee to property taxes could bring over $1m annually, the report said, and is a change the city council alone could enact.

The coalition also explicitly addresses tourism and second-home owners in its report. It suggests removing the state’s 3% cap on property taxes for second homes as well as pulling some money made on short-term rental taxes and fees to the trust. Given that Airbnbs and the like have been a major contributor to Santa Fe’s inflating housing costs, the report notes, such a funding mechanism would likely have broad support from the public.

Funding the trust is an investment that more than pays for itself, advocates say. Ladd gave the example of someone taking out $150,000 or more in loans to buy a home after receiving down payment assistance from the trust. But without that help putting down money, she said, they wouldn’t have been able to get the mortgage in the first place.

“That’s leveraging that kind of investment,” she said. “It works out to be about for every dollar of local funds in a home buying situation, anywhere from $14 to $20 is leveraged to a private resource.”

The trust can help attract private investment in larger developments, too, such as Siler Yard, a rental housing project that will add 65 affordable units, more than half of which will be reserved for families.

The city committed about $2.5m to what wound up becoming a nearly $20m project.

“It’s not even how much the city can do without money, but it’s how powerful it is once it gets out to the partners in the community,” Ladd said.

However, boosting the trust and creating more projects like Siler Yard could be a ways off, given that adding funding mechanisms requires changes to city ordinances and, sometimes, state law.

In the meantime, the exodus of working-class Santa Feans will only continue. Many flee the city for more affordable locales such as Albuquerque, about an hour away, or the closer town of Española.

Martínez is continuing to shop for a new rental in Santa Fe before her casita gets a new owner, but she might wind up packing her bags for the less-costly Albuquerque suburb, Río Rancho.

“I think I’m probably going to have to [leave],” Martínez said. “There’s nothing reasonable and affordable here.”

With the inauguration of Joe Biden and Kamala Harris, American democracy has a chance to reset. The new administration has a historic opportunity to address the country’s deepest systemic challenges, and steer it toward a path of fairness, equality and stability.

–
–
(For the source of this, and many other equally intriguing and important articles, please visit: https://www.theguardian.com/us-news/2021/jan/29/santa-fe-new-mexico-zoom-boom-housing/)