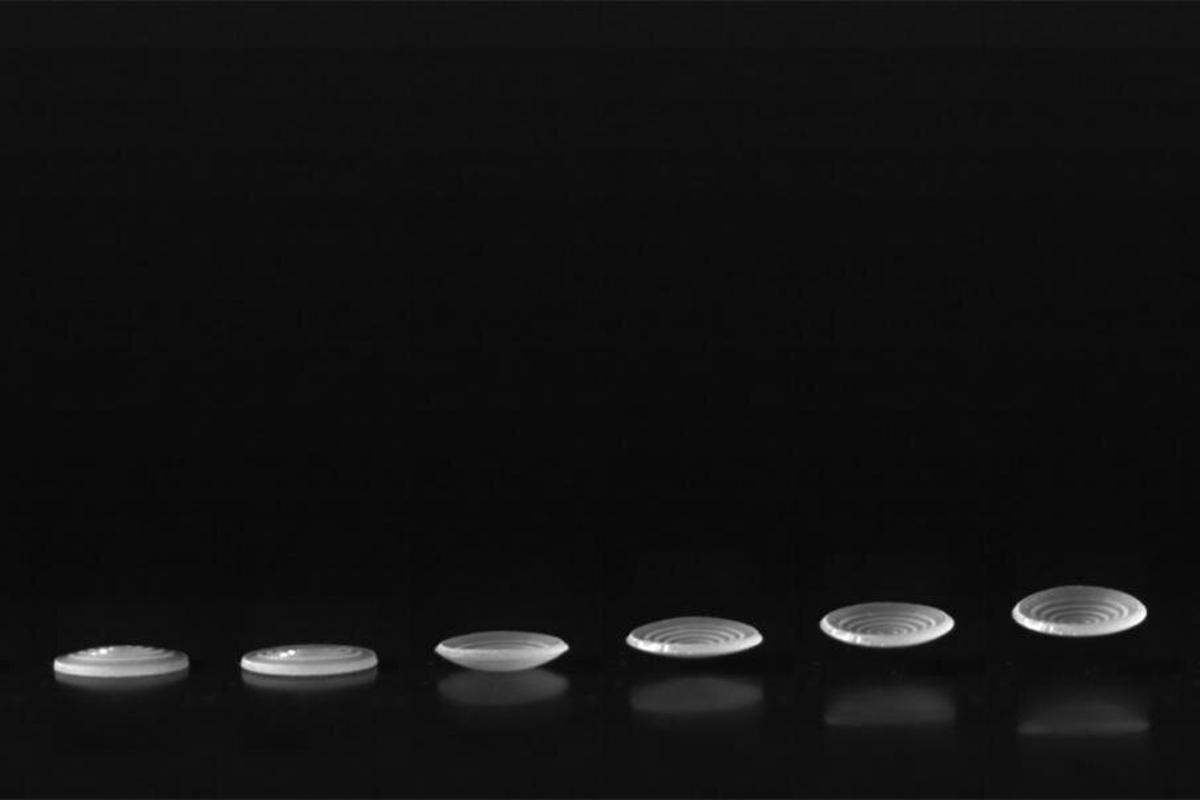 Scientists have developed materials that can propel themselves, such as this self-jumping polymer shell. Yongjin Kim, UMass Amherst

This new material is the handiwork of scientists at the University of Massachusetts Amherst, whose research was funded by the US Army with the intention of recreating the mechanisms of fast-moving organisms in engineered systems. This refers to plants and animals that feature spring-like body parts that enable ultra-fast movements. We’ve seen this form of biomimicry make it into robotic grippers inspired by the Venus flytrap, for example, though these typically rely on external power sources to trigger their movement.

“Plants like the Venus flytraps are good examples of this kind of movement, as are grasshoppers and trap-jaw ants in the animal world,” says study author Al Crosby. “Snap instabilities are one way that nature combines a spring and a latch and are increasingly used to create fast movements in small robots and other devices, as well as toys like rubber poppers. However, most of these snapping devices need a motor or a human hand to keep moving. With this discovery, there could be various applications that won’t require batteries or motors to fuel movement.”

The self-propelling material came about when the scientists were carrying out experiments in which they were watching an elastic gel strip dry. The team noticed that as the strip lost internal fluid to evaporation, it moved by itself as a result, albeit very slowly. Every now and then, however, the process would produce a faster movement, a so-called snap instability, as the evaporation reached a certain threshold.

Further investigations demonstrated that this process could be manipulated by altering the shape of the material, and that the strips could also be made to revert back to their original state, before moving again. The team then experimented with different shapes and landed on some that could move themselves consistently, without the need for manual intervention. Some reshaped strips were even able to climb stairs on their own.

“These lessons demonstrate how materials can generate powerful movement by harnessing interactions with their environment, such as through evaporation, and they are important for designing new robots, especially at small sizes where it’s difficult to have motors, batteries, or other energy sources,” says Crosby.

The materials bear some resemblance to a caterpillar-inspired soft robot we looked at a few years ago that mimics a crawling motion in response to external light. The advantages of tiny machines like these is that there is no need to pack a power source or actuators onboard, so they can therefore remain compact and take on unique tasks. Alternatively, the materials could serve in structures and materials that store energy, or provide mechanical action without a power source.

“The work will have myriad possible future applications in actuation and motive systems for the Army and DoD (Department of Defense),” says Dr. Ralph Anthenien, branch chief, Army Research Office.

The research was published in the journal Nature Materials.