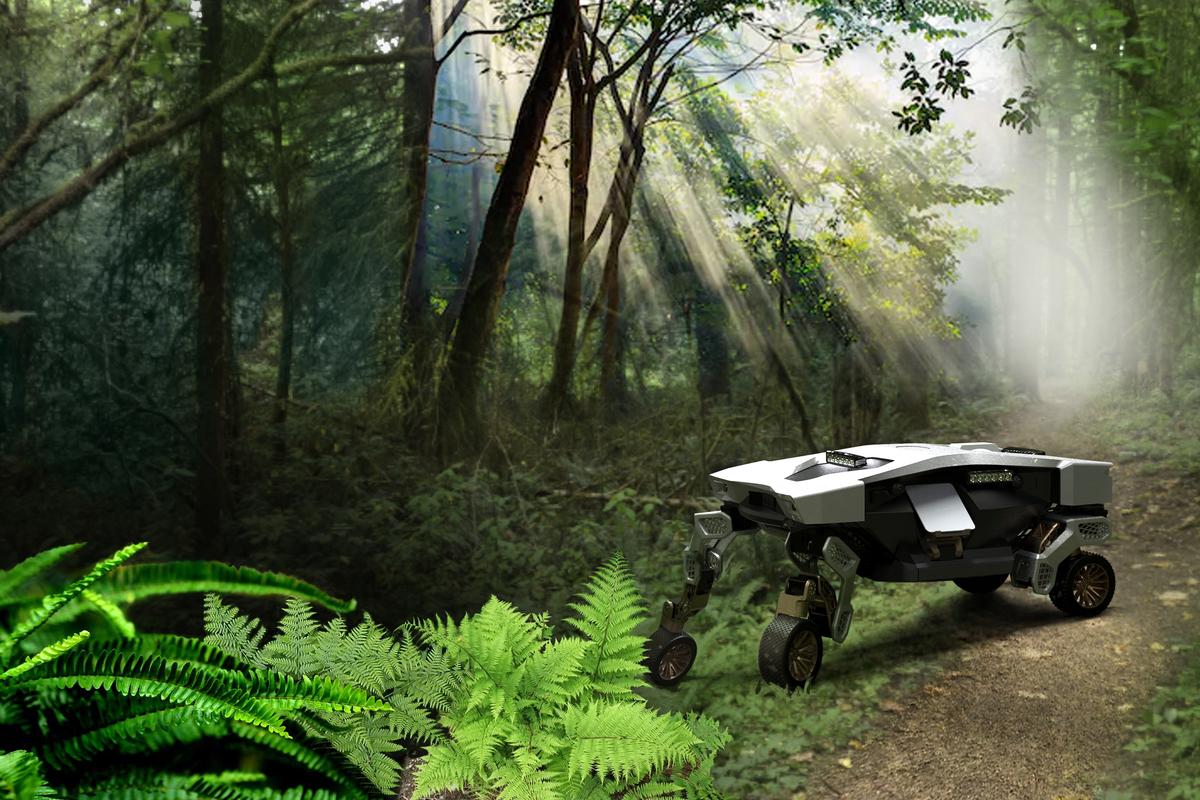 The TIGER looks pretty zippy on a smooth piece of road, but when the legs come out it can get over, around or through just about anything.  Hyundai View 7 Images
–
By Loz Blain

Introduced as a trade-show concept, everyone more or less thought it was a typical piece of automotive-grade marketing toss, until Hyundai announced it was creating a whole new division – New Horizons Studios – solely to focus on futuristic intersections between the automotive, robotics, AI and aviation industries.

New Horizons has now released details on its next project, the TIGER, or “Transforming Intelligent Ground Excursion Robot,” which takes the wild platform underpinning the Elevate and repurposes it for remote or autonomous missions.

So the TIGER adapts the skateboard chassis of the Elevate to unmanned mission purposes, moving to a lightweight, carbon composite structure designed to be 3D-printed. It retains the four eye-popping wheels on legs, each offering six degrees of movement freedom thanks to a swiveling, bending hip, a bending knee, a bending ankle, a rotating wheel mount, and the wheels themselves, with their electric hub motors capable of rolling in either direction. And it retains the sensor suite and on-board computing required to read and respond to terrain and drive the thing.

It ditches the cabin on top, though, and replaces it with a mount ready to accept more or less any mission module. You could stick a cargo module on top, or a disaster relief package, or a stretcher, or a module capable of mapping, mining, seeding, inspecting or exploring anything from a nuclear leak to a hostile planet. What’s on top doesn’t really matter; the platform works with or without it.

Hyundai can build these at any size, to suit a mission plan or cargo goal. It can build them to clip into suitably-sized eVTOL drone platforms that can deploy TIGERs at the closest safe landing site to the target, and let them pick their way through just about any terrain to get the last mile done with minimal tilting of the cargo bed. And lest we forget, Hyundai has dedicated an entire division to eVTOL urban air mobility as well, with a credible tilt-rotor aircraft design already at least mocked up at scale. The company’s already talking about using the aircraft to charge up the TIGER, or vice versa.

I guess we can look at the TIGER like a monstrous outgrowth of something like the hyper-modular REE electric vehicle chassis; it’s a means of getting things from A to B, whatever those things might be and whatever the terrain. Where it’ll end up being used is a matter of commercial imagination, and we certainly hope this extraordinary walking robot car finds its place.

Check it out in motion, looking rather agile, in the video below.

Loz Blain
Loz has been one of our most versatile contributors since 2007. Joining the New Atlas team as a motorcycle specialist, he has since covered everything from medical technology to aeronautics, music gear and historical artifacts. Since 2010 he’s branched out into photography, video and audio production.
–