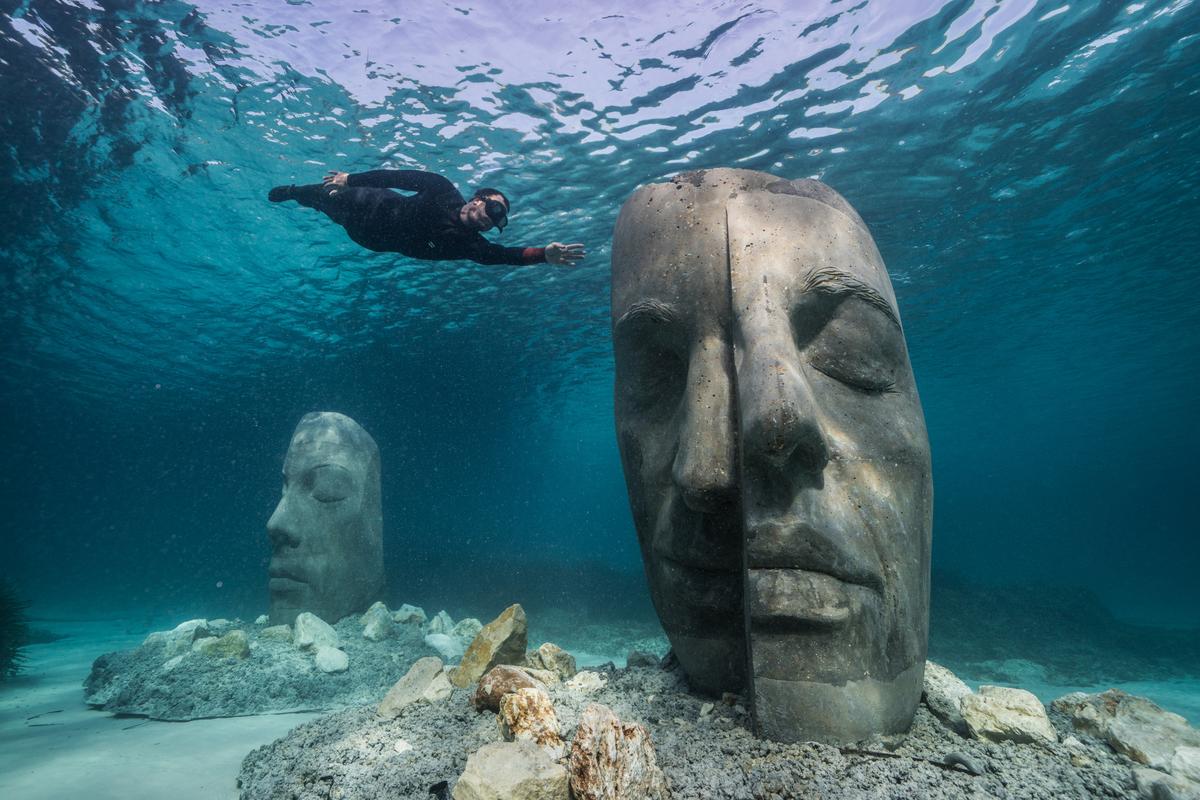 The Underwater Museum of Cannes consists of six head-like sculptures, each of which weighs 10 tons. Jason deCaires Taylor

The project is located off the shore of Île Sainte-Marguerite Island, which is part of Cannes. Notwithstanding its name of The Underwater Museum of Cannes, it’s more accurate to describe the work as a small sunken sculpture park than a museum, as, unlike the British artist’s Sculpture Coralarium for example, there are no walls or ceilings.

The six large heads weigh at least 10 tons each and measure over 2 m (6.5 ft) in height, and are situated at a depth of up to 3 m (9.8 ft). The material used for the sculptures is not specified. According to the artist, the sculptures look like they’re wearing masks.

This isn’t meant as a reference to COVID-19 as you might assume given the current pandemic, but rather the Man with the Iron Mask, who is supposed to have been imprisoned nearby. Additionally, the sculptures were carefully modeled on the faces of locals before being massively upscaled.

“The six works are based on portraits of local members of the community, covering a range of ages and professions, for example, Maurice – an 80-year-old local fisherman – and Anouk – a nine-year-old primary school pupil,” explains Taylor. “Each face is significantly upscaled and sectioned into two parts, the outer part resembling a mask. The theme of masks connects to the history of Île Sainte Marguerite, well known as the location where the Man with the Iron Mask was imprisoned. Cannes, through its famous annual film festival, is well known for its relationship with the performing arts.”

The project was commissioned by Cannes’ mayor and took four years to realize. The area chosen for the Underwater Museum of Cannes was previously blighted with old marine infrastructure, which first had to be painstakingly removed. The completed sculptures were then floated out to the site using boats before divers placed them into position with the help of cranes.

The site is now cordoned off from boats so snorkelers and divers can swim among the sculptures in complete safety, and the hope is that marine fauna and flora will eventually make it their home.

Additional photos of the sunken heads…..

Adam scours the globe from his home in Spain in order to bring the best of innovative architecture and sustainable design to the pages of New Atlas. Most of his spare time is spent dabbling in music, tinkering with old Macintosh computers and trying to keep his even older VW bus on the road.

5 comments
Sign in to post a comment.
Please keep comments to less than 150 words. No abusive material or spam will be published.
David V February 16, 2021 02:17 AM

Love it. Of course they will look so much better in a few years.

This is a great initiative. Looks like the 10 ton weight figure includes the bases. It may have been more interesting if a couple of the heads were tilted in positions that weren’t just upright.

Fantastic idea. Please make more of these and on a bit bigger depths – up to 10 m perhaps.

Future archaeology is going to be so confusing…