–
If you’re taking a day trip to the Sahara Desert in North Africa, you’re going to want to bring a lot of water and plenty of sunscreen. But if you’re planning to stay the night, then you better bring a snug sleeping bag, too.

So, why does this dramatic temperature shift happen in arid deserts like the Sahara? And how do native animals and plants deal with such wild extremes?
–
Related: Could the Sahara ever be green again?

The reason that arid deserts — dry regions covering about 35% of Earth’s land — get so hot, and subsequently so cold, is a combination of two key factors: sand and humidity.

Unlike a thermos, sand doesn’t retain heat very well. When heat and light from the sun hit a sandy desert, sand grains in the desert’s top layer absorb and also release heat back into the air, according to a 2008 report from NASA’s Jet Propulsion Laboratory in Pasadena, California. During the day, sand’s radiation of the sun’s energy superheats the air and causes temperatures to soar. But, at night most of the heat in the sand quickly radiates into the air and there is no sunlight to reheat it, leaving the sand and its surroundings colder than before.

However, this phenomenon alone doesn’t account for such a drastic drop in temperature.

However, this phenomenon alone doesn’t account for such a drastic drop in temperature. After all, when the sun goes down on a tropical beach, you don’t need to don a winter coat.

The main reason for the stark temperature change is that desert air is extremely dry. In arid deserts like the Sahara and the Atacama Desert in Chile, the humidity — the amount of water vapor in the air — is practically zero, and unlike sand, water has a huge capacity to store heat.

Water vapor in the air traps heat close to the ground like a giant invisible blanket and stops it from dissipating into the atmosphere, according to World Atlas. Air with high humidity also requires more energy to heat up, meaning it also takes more time for that energy to dissipate and for the surroundings to cool down. Therefore, a lack of humidity in deserts allows these arid places to quickly heat up but also rapidly cool.

Despite these rapid temperature swings, desert animals are well adapted for the desert’s extreme temperature changes.

“It tends to be a relatively small problem for them,” said Dale DeNardo, an environmental physiologist at Arizona State University who specializes in desert animals. “The bigger challenge is getting enough food and water to survive.”

Reptiles, the most abundant and diverse animal group in the desert, are well adapted to extreme temperature variation because they are cold blooded, or ectothermic, which means they do not need to invest energy in maintaining a constant body temperature. In other words, reptiles can use this energy elsewhere, like hunting. Many reptiles also benefit from being small, which allows them to find shady nooks during the day or warmer rocks at night. “There’s a lot of different places to go to be warmer or cooler, especially when you’re small,” DeNardo told Live Science.

Related: How do lizards cool off?

However, large warm blooded, or endothermic mammals, like camels, are too big to hide away from the sun and can’t let their body temperature drop. Rather, camels survive by maintaining a constant body temperature in both hot and cold conditions. They do this by having lots of insulation in the form of fat and thick fur, which prevents them from gaining too much heat during the day and losing too much at night, DeNardo said.

In contrast, desert birds use evaporative cooling — where they use water to transfer heat away from their bodies, like how humans sweat and dogs pant — through a range of different methods (some vultures urinate on their legs to cool down). But their ability to fly long distances between water sources or to scavenge food, means they don’t have to worry as much about conserving water like other desert animals. “I call it cheating because they don’t really experience the limitations of a desert,” DeNardo said. 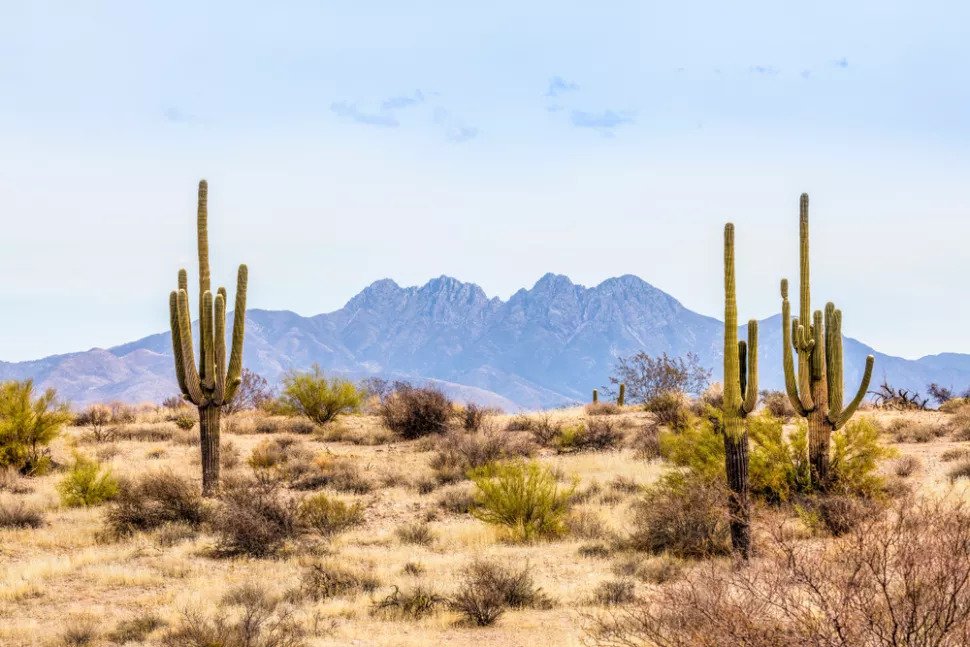 Plants, on the other hand, are more vulnerable to extreme temperatures. “They face a much bigger challenge because they don’t get to move,” DeNardo said. That’s why iconic desert plants, like cactuses, have developed a range of defenses, such as spikes and toxins, to protect their precious water from predators. However, freezing temperatures at night can be deadly for plants because water freezes and expands within their tissues, which can cause irreversible damage. Therefore, desert plants  grow only in areas where the air temperature does not fall below freezing for more than a couple of hours each night, known as the freezeline.

Researchers are still figuring out how climate change may affect arid places and organisms, but “we’re definitely going to see changes,” DeNardo said. “For most deserts, we are predicting an average rise in temperature of 3 to 4 degrees Fahrenheit [1.7 to 2.2 C].”

—Do camels really have water in their humps?

—Why is water so essential for life?

—Has the Earth ever been this hot before?

However, research indicates that “Nights are going to be warmer, but that’s not as bad as warmer days,” DeNardo noted.

Instead, the real problem is that climate change may impact the amount of annual precipitation that desert creatures rely on. “It will become less consistent, you will have relatively wet years and relatively dry years,” DeNardo said. “But even if most are wet enough, it will only take one really dry year to cause big problems.”

This story was updated at 5:00 AM ET on Feb. 22 to fix a Fahrenheit to Celsius conversion.

Stay up to date on the coronavirus outbreak by signing up to our newsletter today.