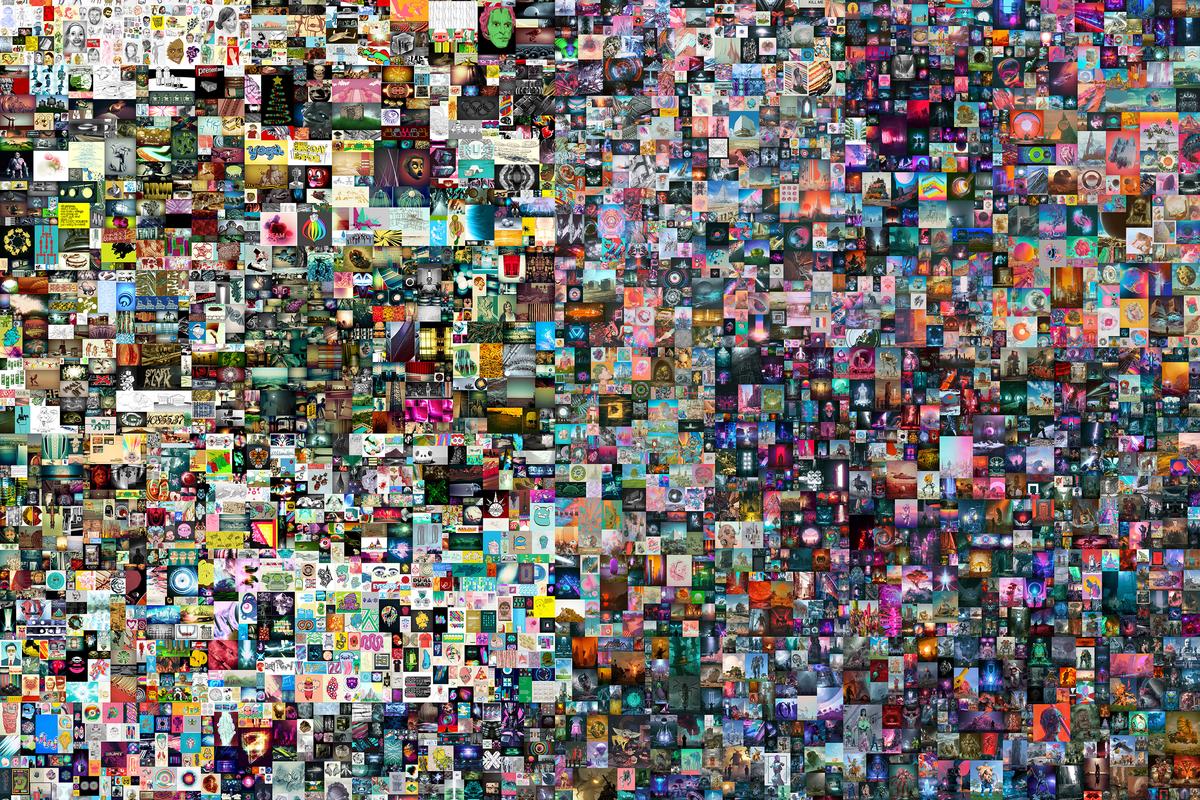 The 69 million-dollar JPEG: Beeple’s Everydays: the First 5000 days.  Beeple  View 2 Images
–
By Loz Blain
2021 Mar 11
–
A digital artist called “Beeple” is now one of the top three most valuable artists alive – in any medium – after he sold a JPG file of his work for US$69,346,250. Welcome to the crazy world of NFTs, and the latest wild gold rush to hit the internet.
–
Mike Winkelmann, AKA Beeple, is a legit digital artist, and a very prolific one. Every day, for more than 13 years, he has created a new artwork from scratch – 5,064 of them and counting, according to his website at beeple-crap.com.
More Stories

He doesn’t seem to think they’re all that great: “The purpose of this project,” he writes, “is to help me get better at different things. By posting the results online, I’m “less” likely to throw down a big pile of ass-sh#t even though most of the time I still do because I suck ass.” I would disagree, and so would others, it seems, since a first-of-its-kind auction at Christie’s just pulled in nearly US$70 million for Everydays: The first 5,000 days, a collage of his first 5,000 images. Watch him soil himself as the auction closes in the video below.

Watch Beeple React to the Historic $69.3m Sale of His Digital Work at Christie’s

–
So if he’s a digital artist, what exactly did the buyer get? Well, an image file just like the one you can right-click and download at the top of this article, although thankfully in higher resolution at 21,069 x 21,069 pixels. But they also had their digital identity forever entered in the provenance record of non-fungible token ID 40913.
–
Non-fungible tokens, or NFTs, are a new type of asset class: unforgeable digital certificates of ownership and authenticity. Non-fungible simply means unique; where one dollar is the same as any other, no two non-fungible items are alike. Your car is non-fungible, as are your shoes and Picasso’s Weeping Woman; they are unique items with a history of ownership. Anyone can download a picture of the Picasso, or your shoes for that matter, but the originals are owned by somebody, and that owner has the sole right to sell them.
–
An NFT is designed to confer these properties to items, whether digital or physical, and keep a record of the item’s provenance, from the original owner, through every subsequent set of hands up to the current owner. They are secured through the blockchain of the Ethereum network, meaning that this entire ownership history can easily be traced right back to the creation of the NFT, by anyone.
–

The decentralized nature of blockchains like Ethereum means that there’s no central repository of ownership records that can be hacked into, no single place a would-be thief can go to steal your property. Your ownership of an NFT is written right into the Ethereum blockchain – an ever-growing series of “blocks” that are constantly being created to represent new transactions.

Every time a block is added, the change is sent out to propagate through the network of every computer hooked into the Ethereum network – millions of them, in a permissionless, non-hierarchical web that anyone can join. The entire network works together to validate that every addition to the blockchain is legitimate, going right back to the place where ownership was last established to make sure the asset has been properly transferred to the right new owner.

The network also checks to make sure that earlier entries in the blockchain look exactly the same for everyone, so if you own an NFT and somebody hops in and edits the blockchain to change a historic sale and make it look like they’re the owner, the network will discover and reject that change very quickly.

The ability to use the blockchain to represent things other than money is part of the genius of Ethereum, an inspired idea by Ethereum co-founder Vitaly Buterin. It’s a key distinction between Ethereum, which also has its own cryptocurrency (Ether), and Bitcoin, which is a cryptocurrency and nothing more.

So as certificates of authenticity go, NFTs are much more watertight than, say, a certificate of authenticity. The person that bought that Beeple image can show a verifiable history of ownership going straight back to Beeple himself, in a format that’s practically impossible to fake.

Other neat tricks NFTs can do include the ability to divide a single asset up and sell shares in it, and the ability to use NFTs as collateral in loans, held in a sort of digital escrow until the loan is paid out. Original NFT creators can also set them up to include royalties on future sales of the asset, such that any time it changes hands, a cut goes to the creator.

What are NFTs used for?

NFTs can be applied to any unique item. They could, for instance, be a great way to trace and verify the ownership of real estate, and this very well might happen at some point. They could represent concert tickets, either general admission or linked to a specific seat or backstage pass. They could be used to represent and verify any kind of physical collectible, from a Marilyn Monroe dress, to a limited-edition Louis Vuitton whatever, to a signed Michael Jordan rookie card, or to trace the ownership and lineage of a racehorse.

But right now, they’re exploding in the world of digital content, where NFTs offer an unprecedented ability for people to become the owners of things that were more or less impossible to own in the past. Artists like Beeple can now sell “originals” of things that everyone can see, but only one person can own. Digital media, like JPG images, audio files or videos, now have a way to enter the wildly speculative world of collectibles.

The guy that made the Nyan Cat video, for example, managed to sell its NFT for US$600,000 as a piece of internet history. The NBA has jumped on board early, setting up a “Top Shot” website where people can buy and trade ownership of highlight plays, which are released in limited edition batches. The numbers involved are wild; #4 of 25 “Holo MMXX (series 1)” copies of a December 2019 dunk by Memphis Grizzlies player Ja Morant is currently listed for a “lowest ask” of US$240,000. #7 changed hands in January for just under US$4,000, and #8 went for a cool US$100,000 in February.

Why on Earth would you pay that money for the privilege of “owning” something anyone can enjoy? Well, put simply, because the value of a collectible is no more and no less than other people are willing to pay for it, and people are speculating that they’ll make a profit by selling their NFTs down the track. The entire digital world can now be thrown open for collectors to bid and bet on.

And the gold rush is on, big time. Every time a Beeple or a Nyan Cat hits the headlines, more people get the sense that there is serious cash to be made by anyone who gets into a good asset early. This is a fresh opportunity for digital creators, who have been forced for decades to work in a world where their work is seen as a free good by the vast majority of consumers. Musicians who have seen millions of Spotify streams materialize into a few thousand measly bucks can now sell one-off or limited edition originals to their fans, who in turn can satisfy themselves that they’re supporting their favorite creators directly as well as taking a bet on their future stardom.

But it’s also a massive channeling of money and resources into a giant bubble of essentially worthless speculation, a grubby commodification of a digital world that once used to pride itself on being wild and free, and a new, marvelously fictional asset class for the wealthy to diversify into. It strikes me both as a terrific way for artists to finally get paid in the digital world, and as a depressing reminder that there’s billions of dollars out there changing hands between imaginary asset gamblers instead of doing anything to move the world forward. And you can bet your bottom dollar that for everyone that buys an NFT in the next few months and flips it for a fat profit, there’ll be ten losers left holding a big nothing-burger and wondering where their money went.

As for me, well, I’m somewhat of a digital creator myself. Indeed, one could say I contributed a genuine moment of internet history to the annals back in 2015. And I won’t lie, I’m tempted to see what the original might fetch. I wish I’d caught it in a jar so I could release a glass master.

Loz Blain
Loz has been one of our most versatile contributors since 2007. Joining the New Atlas team as a motorcycle specialist, he has since covered everything from medical technology to aeronautics, music gear and historical artefacts. Since 2010 he’s branched out into photography, video and audio production.
–
6 comments
Sign in to post a comment.
Please keep comments to less than 150 words. No abusive material or spam will be published.
Rustgecko – 2021 Mar 12 – 02:09 AM
“Mike Winkelmann, AKA Beeple, is a legit digital artist.”
What is a “legitimate” artist or an “illegitimate” artist?
FB36 – 2021 Mar 12 – 07:06 AM

“Digital gold rush”? IMHO, a much better analogy would be “digital tulip mania”!

Not to mention, realize, as soon as “Satoshi” sells his 1 million bitcoins, everybody would rush to sell all their bitcoin/cryptocurrency & all prices would quickly hit zero & suddenly millions of people would lose all their money!

buzzclick – 2021 Mar 12 – 08:58 AM
Thru the eyes of the beholder, legitimacy exists in the mind. It can become real by an association that is created by an artist and perpetuated by the enthusiast.
Username – 2021 Mar 12 – 09:40 AM
The people are buying a copyright to an image not one will ever want and themselves won’t use. Brilliant.
TechGazer – 2021 Mar 12 – 09:46 AM
FB36 beat me in responding that it’s just tulips again. Humans never seem to learn from history. Yes, some people will get richer by this form of gambling, but that requires a bunch of stupid people to lose _their_ money.
Nelson Hyde Chick – 2021 Mar 12 – 11:27 AM
There is so much better things to spend money on. This is another example of some people have more money than common sense.
–
–