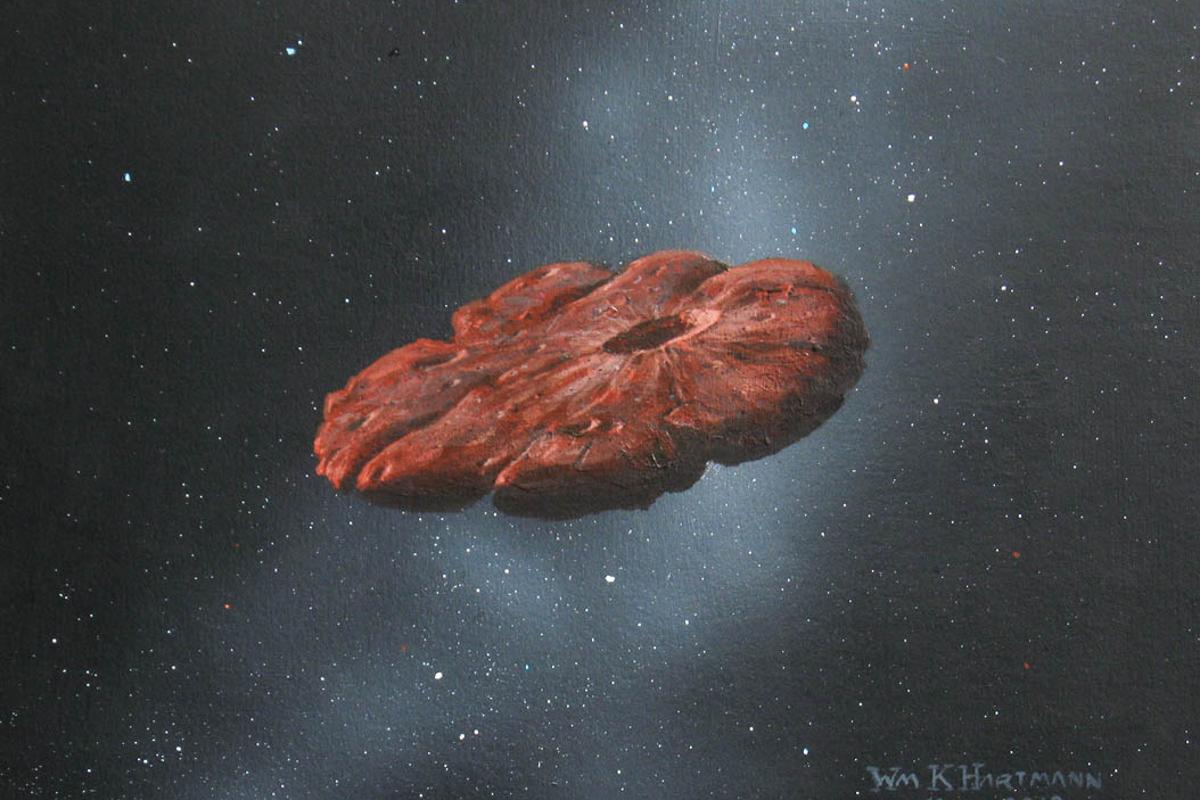 An illustration of ‘Oumuamua’s pancake-like shape.  William Hartmann  View 2 Images
–
By Michael Irving
–
‘Oumuamua was discovered by the Pan-STARRS observatory in October 2017, and its speed and trajectory indicated that it had swung in from beyond our solar system, making it the first known interstellar object.
More Stories

Originally classified as an asteroid, ‘Oumuamua’s light signal was pulsing regularly, indicating it wasn’t the usual roughly round lump of rock you’d expect of an asteroid. Instead, astronomers hypothesized that it was a cigar shape some 400 m (1,300 ft) long, tumbling end over end. When viewed through telescopes, that would produce the variable light signature as it would look brighter when more of the face was visible and dimmer when viewed end-on.

But it was even weirder than that. ‘Oumuamua actually sped up as it whizzed around the Sun. This “rocket effect” is often seen in comets when heat from the Sun causes the ice to vaporize into gas, creating a plume that accelerates the object. But ‘Oumuamua didn’t have the telltale tail that comets usually sport.

Astronomers have put forward a range of explanations for these strange features. Some hypothesize that it was a fragment of a rocky planet torn into elongated pieces by a close encounter with a star. And of course aliens were brought up – and swiftly debunked.

In the new study, the ASU researchers put forward a new explanation that neatly accounts for all of the observations. According to the team, it’s a chunk of nitrogen ice, possibly ejected from a Pluto-like body after a cataclysmic impact.

The team considered a range of different types of ices, calculating how fast they would lose mass to the heat of the Sun and how big a rocket effect that would produce. They estimated the mass and shape of these objects, and how reflective the ices would be. Of all the types studied, the team realized that nitrogen ice was the best fit for the observations of ‘Oumuamua’s oddities.

“We knew we had hit on the right idea when we completed the calculation for what albedo (how reflective the body is) would make the motion of ‘Oumuamua match the observations,” says Alan Jackson, co-author of the study. “That value came out as being the same as we observe on the surface of Pluto or Triton, bodies covered in nitrogen ice.”

The team says that the most likely scenario is that ‘Oumuamua was thrown off of an exoplanet about 500 million years ago as the result of an impact, before being ejected from that system and drifting towards ours. After being eroded by cosmic rays in interstellar space for hundreds of million years, they estimate that it entered the solar system in about 1995.

“Being made of frozen nitrogen also explains the unusual shape of ‘Oumuamua,” says Jackson. “As the outer layers of nitrogen ice evaporated, the shape of the body would have become progressively more flattened, just like a bar of soap does as the outer layers get rubbed off through use.”

The new hypothesis is very similar to another proposed last year by scientists at Yale, who suggested it was a hydrogen iceberg that froze solid in a dense molecular cloud in deep space. However, this kind of object is entirely hypothetical, making the nitrogen ice chunk seem a little more plausible.

Either way, the team says that future telescopes will help to keep an eye out for more interstellar interlopers, which could be invaluable time capsules for other star systems. Already, a second interstellar comet has been detected, so perhaps these things are fairly common.

The research was published in a pair of papers in the AGU Journal of Geophysical Research: Planets. The team discusses the work in the video below.