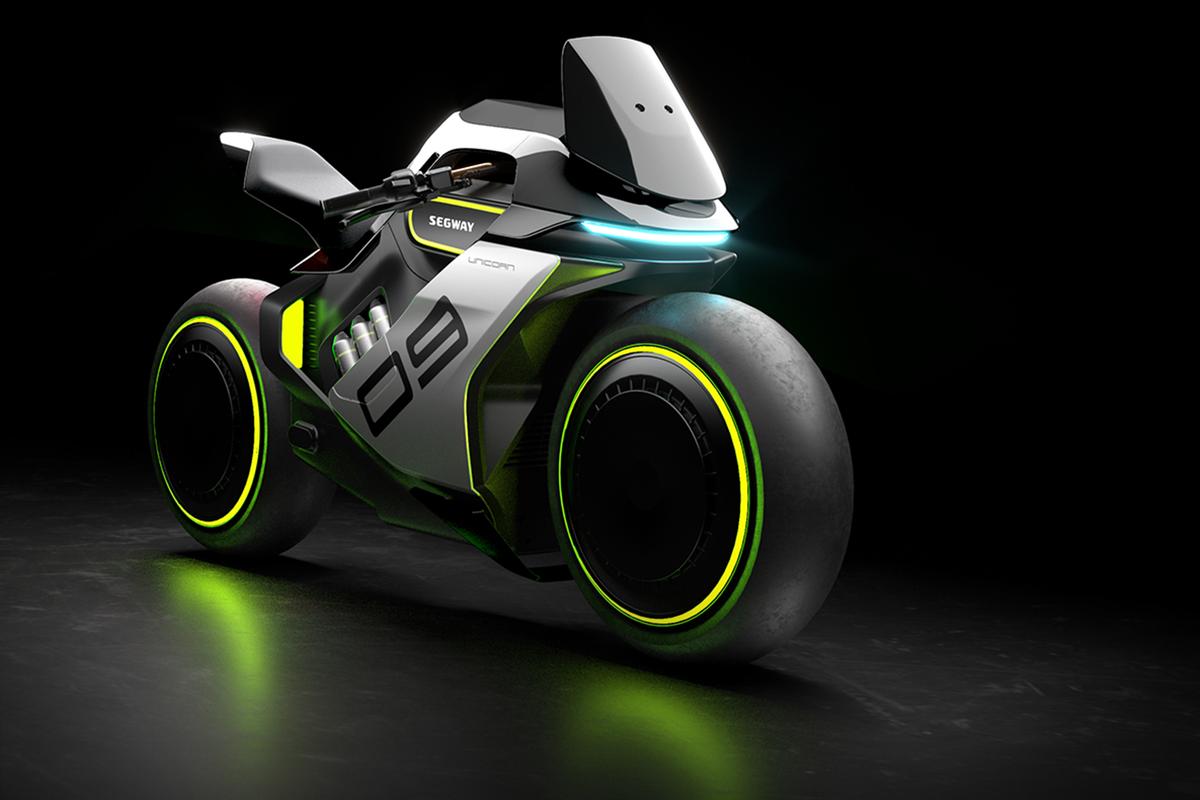 Now, there’s an Apex H2 coming, which will run a hydrogen-electric hybrid powertrain – gaseous hydrogen stored in tanks will be converted into electrical energy through a fuel cell and fed into a buffer battery, which will power an electric motor that drives the rear wheel in some way or another – we can’t see whether there’s a chain drive or a hub motor or what indeed is going on in these renders. Yes, that’s an exhaust port in front of the rear wheel, but all that’ll be coming out of it is water vapor.

Part of what makes this bike look so outrageously next-gen is its rude lack of suspension forks. Instead, the front wheel looks like it’s floating on air, thanks to a single-sided front swingarm and hidden monoshock arrangement, to match the single-sided swingarm at the back. Both wheels appear to have a large cover over the right side.

It looks absolutely wild, with the often-cumbersome steering system hidden away under the front fairings and the handlebars poking out of holes in the side of the “tank” section. It’ll also be a pain in the bum to engineer, because that front swingarm not only needs to handle suspension, but steering (which can get sloppy on these kinds of designs, with their multiple linkages) and braking, which needs to fit somewhere too.

Still, if it comes out looking anything like these renders, this thing will be a winner from day dot, even if there aren’t a ton of fueling stations around yet for hydrogen vehicles, depending on where you live. It just looks too damn cool not to do well. Even the left hand side of the bike looks pretty good.

And it gets us to thinking: could hydrogen motorcycles be a thing? Batteries seem destined to reign supreme in the passenger car market; lithium ion cells can get the job done pretty well at this point, and they stand to improve in the future. But other types of vehicles will never work with batteries: long-haul electric aviation and shipping, for example, need energy storage systems that can flat out carry more electrons, and in these markets, hydrogen looks like it might find a place.

But what about motorcycles? Well, maybe there’s a case for H2 on two wheels. Electric motorcycles are already stellar commuting options, but for sports and pleasure riding, most riders want something they can either tool around on all day, or fill up quickly at a fuel station. Battery-electric motorcycles, ridden hard, tend to run out of juice long before their gasoline brethren start flashing their reserve lights, and not everyone wants to sit around for an hour while their bike charges back up at some distant charge station.

Hydrogen has two advantages here: it offers much higher energy density than lithium batteries, and you can fill up your tank about as quickly as the gas tank on your GSX-R, provided there’s a hydrogen station nearby. Leaving aside the fact that there’s probably not at this point, an H2 motorcycle should offer more range on a tank than most battery bikes on a charge, and let you fill up and hit the road again quick smart.

Segway has not released any tank size, weight or range figures for the Apex H2. Those will tell us plenty about how well the hydrogen tank, fuel cell, buffer battery and assorted sundries package up in a motorcycle frame, and we’ll be able to see how the weight is affected. These, plus an impression of how the thing is to live with, will give us a good idea whether hydrogen has a future here. Barring some impressive leaps in battery performance, hydrogen may eventually prove a very handy way of decarbonizing the sports and touring motorcycle markets, leaving batteries to more practical daily commuting use.

Segway says it’ll be launching a crowdfunding campaign for these bikes, once it’s got 99 orders to get started with – that’s best I can tell from the incredibly dodgy translation tool I’ve had to use to get information out of Segways’ Chinese website. Deliveries are expected to begin in 2023. Honestly, at less than 11K US for a bike so unique and striking, I can’t say I’m not tempted. Even if there’s nowhere I can fill it up, I kinda want it in the shed.

Loz has been one of our most versatile contributors since 2007, and has since proven himself as a photographer, videographer, presenter, producer and podcast engineer, as well as a senior features writer. Joining the team as a motorcycle specialist, he’s covered just about everything for New Atlas, concentrating lately on eVTOLs, hydrogen, energy, aviation, audiovisual, weird stuff and things that go fast.

5 comments
Sign in to post a comment.
Please keep comments to less than 150 words. No abusive material or spam will be published.
guzmanchinky 2021 Apr 08 – 07:13 AM
Very Tron looking, and moving the ball forward is good news no matter what you think of the Hydrogen economy model…
Mayakovski 2021 Apr 08 – 10:06 AM
If they can bring this to market with the same specs and price it will be a very big seller. I know I will be in line.
Kevin Ritchey 2021 Apr 08 – 02:03 PM
Before anything, the hydrogen infrastructure needs to exist or this is a pipe dream. Please do it!
Spud Murphy 2021 Apr 08 – 03:40 PM
There is no way they will produce this for that price, it’s totally unrealistic. Fuel cell vehicles are expensive to manufacture, why bother when there are already battery-only bikes with vastly better specs than this? And with an electric bike you can fill up anywhere, with a hydrogen bike, you can fill up practically nowhere.
–

And, given that almost all H2 comes from methane, and the low efficiency of the hydrogen fuel cycle, you will be better off sticking with a petrol bike if CO2 reduction is your goal. Hydrogen is NOT a means to decarbonisation until all hydrogen produced is green, not grey.

Besides, who wants to ride around with a hydrogen tank pressurised to 10,000psi between their legs? You’d have to be a special kind of crazy to want to do that.

Hydrogen is a greenwashing distraction in the move to BEVs, it’s pretty sad to see an established company like Segway get caught up in the hype, but they are not alone, just look at Toyota, Hyundai and numerous others, most of which have realised the folly of H2 and shifted to BEVs instead.

Propfan 2021 Apr 08 – 07:51 PM
@spud
No matter how many times anyone writes about how bad they think Hydrogen is for transportation, it continues to advance and thus eventually become dominate. The valid message sent on not enough fueling stations is only temporarily true as the number of stations increases helped by H2 vehicles creating the demand. When they are as beautiful as this bike I can imagine homemade H2 becoming an added source just to go for a ride.
–
The points made in New Atlas previously stand;
https://newatlas.com/marine/yanmar-prototype-hydrogen-fuel-cell-boat-tested/Again in summary, for all forms of transportation, there is a point based on speed and distance where a hydrogen fuel cell is cheaper and also a point where achieving a design goal is impossible with batteries.
–