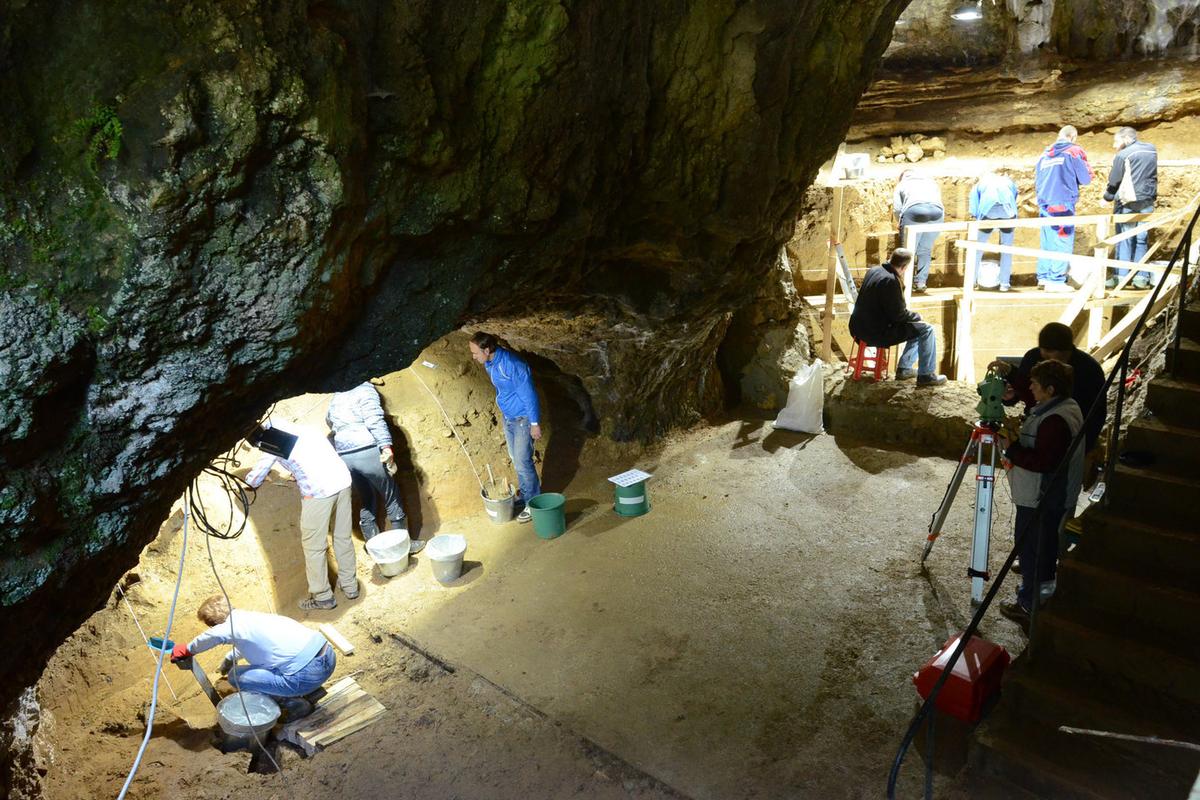 Archeologists excavate Bacho Kiro Cave in Bulgaria, where three modern human specimens were found to have recent Neanderthal DNA.  MPI-EVA/ Nikolay Zaheriev
–
By Michael Irving
–
Today, modern humans, or Homo sapiens, are the only living species of human, but that wasn’t always the case – for hundreds of thousands of years we shared the planet with a whole family of related species. While there was no doubt conflict, and we may have even contributed to the extinction of some species, we also got along very well at times.
More Stories

Genetic studies have long shown that modern humans interbred with archaic species, including Neanderthals, Denisovans, and mysterious “ghost” species that we haven’t even identified. As a result, all non-African human populations have up to two percent Neanderthal DNA in their genomes, while people of Melanesian, Aboriginal Australian and Papuan descent have between three and eight percent Denisovan DNA.

Now, a pair of new studies has delved deeper into when exactly this interbreeding occurred and how common it might have been. One examined the skull of a woman nicknamed Zlatý kůň, found in Czechia, while the other study analyzed the remains of three individuals found in Bacho Kiro Cave in Bulgaria. All four specimens were dated to around 45,000 years ago.

The teams conducted genetic analyses on the bones to investigate their ancestry, and the extent to which they contributed genes to present-day human populations. All five genomes contained substantial Neanderthal DNA and, intriguingly, it seemed that the interbreeding had happened relatively recently in the family histories.

When species interbreed, the most immediate offspring not only have the highest levels of Neanderthal DNA, but these segments appear longer in the genome. The more generations down you go, without more of that DNA being added into the mix, the shorter these segments become. With that in mind, the teams were able to determine how far back the admixing had taken place.

Zlatý kůň, meanwhile, was found to have been about 2,000 years removed from her Neanderthal ancestors – still not all that long, in the grand scheme of things. From the length of her Neanderthal segments, the researchers estimate that she represents the oldest known modern human genome found so far.

The scientists were also able to learn more about the descendants of these people and, curiously, none of them seemed to have contributed genetically to the local European populations. The three Bacho Kiro Cave individuals were found to be more closely related to ancient and present-day populations in East Asia and the Americas than they were to Europeans. Zlatý kůň was also found to not have any genetic continuity with the modern human populations in Europe after around 40,000 years ago.

These kinds of studies can help us piece together the puzzle of ancient human migrations and evolution. Previous work has even managed to identify a first-generation hybrid between a Neanderthal and a Denisovan.

The study focusing on Zlatý kůň was published in the journal Nature Ecology & Evolution, while the study on the Bacho Kiro Cave specimens appeared in Nature. Researchers discuss the Zlatý kůň find in the video below.

Michael Irving
Michael has always been fascinated by space, technology, dinosaurs, and the weirder mysteries of the universe. With a Bachelor of Arts in Professional Writing and several years experience under his belt, he joined New Atlas as a staff writer in 2016.
–
5 comments
Sign in to post a comment.
Please keep comments to less than 150 words. No abusive material or spam will be published.
–
clay – 2021 Apr 12 – 07:15 AM
More actual proof that we are all actual Hybrids of different species… and *it’s okay* 🙂 Mixin it up!
–
Expanded Viewpoint – 2021 Apr 12 – 10:23 AM
Yeah, so much for any “pure race” theories!!
–
bwana4swahili – 2021 Apr 12 – 12:00 PM
I can just imagine the conversation around the fire in the girl’s cave…

Girl (Homo Sapien): Is it alright if I go to the mammoth hunt with Grog (Neanderthal)
Dad: I guess it’ll be ok but don’t get in the way and stay out of the bushes.

And thus it started…
–

HoppyHopkins – 2021 Apr 18 – 11:02 PM
What I am more interested in is possible Denisovan DNA in the genome of the Ainu of Hokkaido Japan, the Aborigine of Australia and the Negrito peoples of Micronesia. It might possibly explain the heavy brow ridge fount in all three of these peoples. I know that Denisovan DNA is very prevalent in the Himalayan populations. And I am very curious about a group of islanders in the Indian Ocean who have enlarged spleens which allow them to dive for pearls longer than normal humans can on a single breath of air.
–
HoppyHopkins – 2021 Apr 18 – 11:07 PM
Neanderthal Lives Matter. No more of this interbreeding with inferior races. I mean they get totally winded after a hunting chase of only twenty miles, their bones are brittle and they are weaker than my ten year old.
–
–