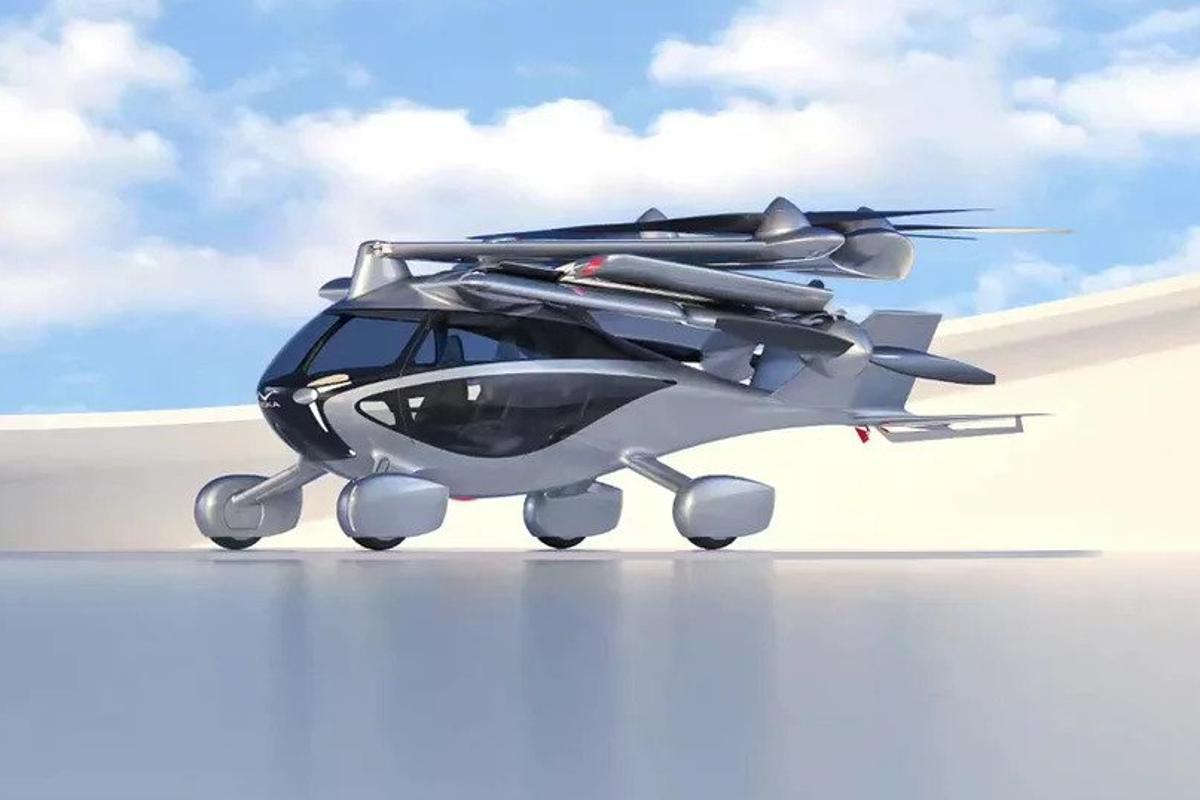 The Aska is a four-seat street-legal car concept that auto-folds out into a six-rotor transitioning eVTOL.  NFT Aska

By Loz Blain
–
We last heard from Israeli/American startup NFT (no relation to the bizarre non-fungible token madness sweeping the crypto and collectible worlds) back in 2019. The original concept for the Aska was a similar roadable eVTOL aircraft design in a three-seat retro saloon body, with the VTOL fans mounted in holes in the car’s hood and tail sections.
More Stories

The new design looks much closer to the standard electric VTOL air taxi shape: a somewhat helicopterish teardrop cabin seating four, a small V-shaped tail, and a six-prop electric VTOL lift system. Four pure vertical lift props are mounted on long arms that swing back out of the way when you’re not flying, and the other two are mounted on a set of wings.

These wings articulate their little hearts out. Not only do they automagically fold themselves in half and scissor back toward the tail to keep the car narrow enough to drive and park, they’re also designed to tilt, so the middle two VTOL props and wing can point upward for vertical takeoff and landing, and then tilt fully forward for more efficient forward flight using the wing for lift and those two central props for forward propulsion.

In the same way, it can be used as a short takeoff and landing (STOL) aircraft if you’ve got access to a runway. Just point the middle props and wing forward, gain a bit of speed and take off like a regular ol’ airplane. This is far and away the most efficient way to fly; VTOL operations suck juice like nobody’s business.

Should your juice be sucked, the Aska promises to ship with an old-fashioned range extender, in the form of an unspecified fossil fuel motor that can charge up the battery during flight. NFT says this bird can fly up to 250 miles (400 km) with the range extender extending its range, at speeds up to 150 mph (240 km/h). The company says these range extenders will be capable of running on hydrogen fuel too; that won’t make anyone’s life easier at this stage, but it does give owners a path to decarbonization down the track when hydrogen becomes easier to get hold of.

On the road … well, it’ll turn heads, that’s for damn sure. With all its spiky wings and props folded back it looks like it’s got a Sonic the Hedgehog haircut, or like somebody emptied the cutlery drawer on top of it. The fact that its humble in-wheel electric hub motors only allow it a top speed around 70 mph (112 km/h) will give onlookers even more time to stare, and it’s a fairly certain bet that if you drive one of these on the road, you’re going to see the backs of more phones than any goon in a Lambo.

The cabin has a funky, yokey steering wheel, a two-way gearshift system that does downward from park into reverse, neutral or drive, or else sideways from park into V and F modes that presumably mean VTOL and forward flight. From the looks of the renders, just about every surface that’s angled toward your head will be a touchscreen. NFT says you’ll need a pilot’s license to fly it, but the bulk of the work in the air will be done by semi-autonomous computer control.

And whaddya know, it’s on presale right now! Your fully refundable US$5,000 deposit gets you a slot on the build list, as well as a single share option. The price – an eye-watering $789,000 – includes getting you a pilot’s license, a fully custom interior and a personalized license plate, which will help you work out which one’s yours in the car park.

NFT says it plans to start flight testing a full-scale four-seat prototype by the end of 2022, then it’ll spend the next three years working on certification and serial production processes, with the first flying cars expected in customers’ hot little hands as soon as 2026.

It goes without saying: this one looks like a long shot. By specifically targeting private owners who want to drive a bit and fly a bit on their way to wherever they’re going, NFT won’t have fleet-scale pre-sales like the air taxi mobs do, to balance out against the crippling cost of aircraft development and certification. And it’s not just aircraft development; it’s folding, transitioning electric VTOL aircraft development, plus air certification, plus street certification as a four-wheeler, which means it’ll need to satisfy all the stringent (and heavy) safety criteria of a passenger car.

To put it another way, NFT has to scale all the same mountains billion-dollar behemoths like Joby and Lilium have in front of them, plus make its aircraft fold up, and then get the whole contraption certified as a passenger car to boot. eVTOLs themselves are seriously tricky business, this thing’s 10 times harder again.

So even with an 800-grand price tag, NFT will have to sell a ton of these to start making a profit. How big is the market for roadable aircraft right now? Not real big – even for much simpler, single-seat gyrocycles. And considering there’s a very good chance air taxi services will be operating by the time these things launch, offering door-to-door, drive-fly-drive journeys cheaply through a smartphone app, the sell is sure to get even harder in the future. Are you really going to park this thing on the street where it might just get a ding big enough to wreck a prop?

At the end of the day, the Aska looks to us like a fun vehicle to think and fantasize about, but an absolute nightmare to build, certify and commercialize, and likely a pain in the butt to own even once you get it paid off.

We’d love to see jiggers like the Aska bumping their way down the street, windows down, Dreams by Van Halen pumping on the stereo as the flight gear folds out and they waft off the ground and out of the traffic with a carefree salute to the drivers stuck below. But we won’t be holding our breath.

Check out how this thing folds and tilts in the video below.

Loz Blain
Loz has been one of our most versatile contributors since 2007, and has since proven himself as a photographer, videographer, presenter, producer and podcast engineer, as well as a senior features writer. Joining the team as a motorcycle specialist, he’s covered just about everything for New Atlas, concentrating lately on eVTOLs, hydrogen, energy, aviation, audiovisual, weird stuff and things that go fast.
–
8 comments
Sign in to post a comment.
Please keep comments to less than 150 words. No abusive material or spam will be published.
–
Towerman – 2021 Apr 19 – 02:50 AM
“Racing drone project”
–
Paul314 – 2021 Apr 19 – 06:50 AM

At that price tag (assuming people do plunk down the full price) they’d likely only have to sell a few thousand to get through certification. 1000 x $789K = $789M. Still doubtful.

Also, although it ostensibly parks in a regular space, can you imagine how short the lifetime would be on a typical city street?
–

Bob Flint – 2021 Apr 19 – 09:37 AM
Are you sure you have enough moving parts?
–
Nelson Hyde Chick – 2021 Apr 19 – 10:28 AM
When is the flying car fantasy ever going to go away?
–
Daishi – 2021 Apr 19 – 03:33 PM
This is just a symptom of people discovering you can legally sell pre-orders for anything and never deliver it without consequence. I’m not sure how many people watched the Lady and the Dale (I recommend it) but they essentially got busted for fraud for selling pre-orders but their auto company wasn’t much more fraudulent than many startups today promising things even less realistic.
–
Marco McClean – 2021 Apr – 03:43 PM

The wheels should fold up too, then the body should fold front to back, then side to side, then front to back again, so the whole thing becomes a briefcase, then you happily carry it into the office with you by the little handle that the rearview mirror has become.

I especially like the part where “VTOL operations suck juice like nobody’s business.” I hear it in my head in the gravelly, breathy voice of a comic Mob gangster. The other guy at the table leans back and says, “Take it easy, Vinny. I know a guy wit’ a short runway.” They both chuckle at the almost Seussian loaded triple entendre of this.
–

Propfan – 2021 Apr 19 – 06:43 PM
I wonder if the bending moment in those swing arm pivot pins with those long arms lifting may actually be,,, a snap ! Then on the scam potential,, Remember Moller’s flying car fail,, https://en.wikipedia.org/wiki/Moller_M400_Skycar it took in millions over 4 decades but it had better logic and mechanical physics than this origamey rig.
–
Towerman – 2021 Apr 19 – 11:29 PM
The editing of my first comment obviously went somewhat wrong.
What i meant to say was, How about an update on the manned racing drone project down in Australia ! !
–