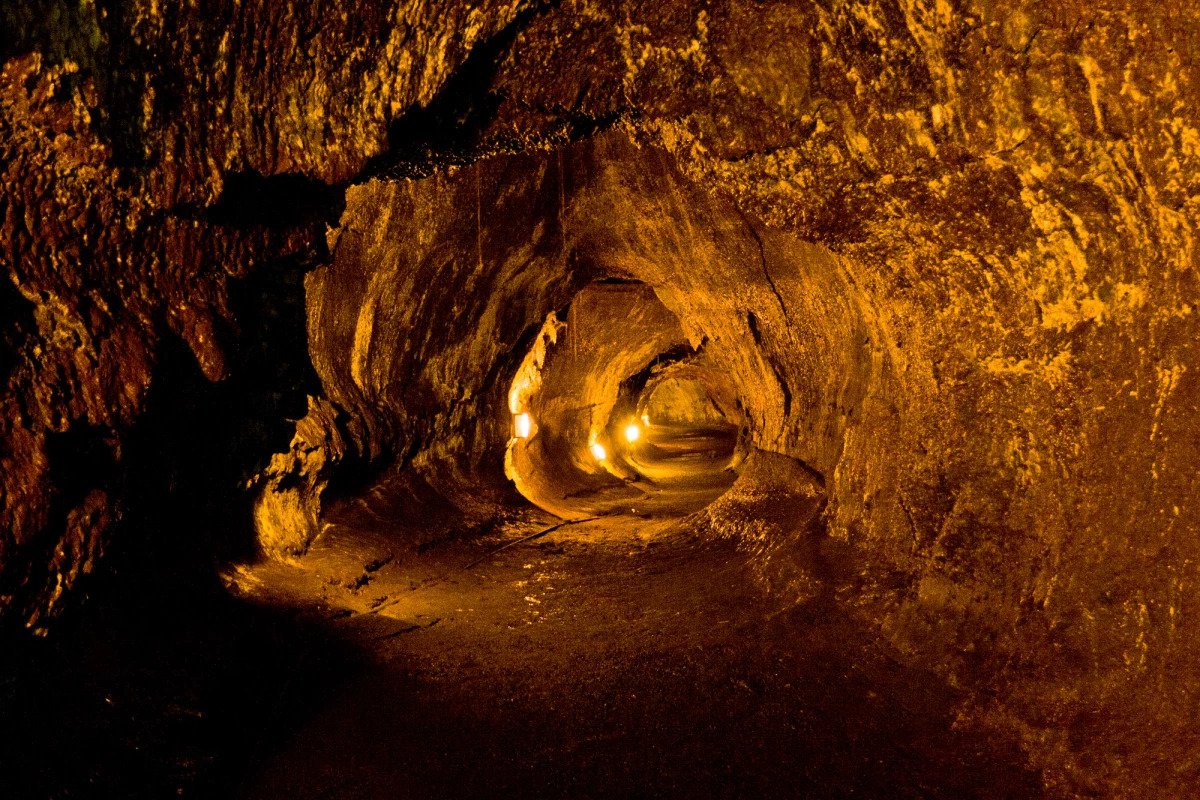 Lava tubes in Hawaii, which may be similar to caves on Mars, where new research suggests microbial life could be living today.  volgariver/Depositphotos
By Michael Irving
2021 Apr 22

–
One of the main goals of NASA’s Perseverance rover is to scour the surface of Mars for signs of ancient microbial life. But a new study of the geochemistry of the Red Planet suggests that life could still be thriving below its surface today.
–
Modern Mars may seem like a desolate wasteland to us Earthlings, but that wasn’t always the case. Over the decades rovers and orbiters have found mountains of evidence (sometimes literally) that the Red Planet was once much bluer, covered with oceans and rivers. Life could have taken hold in those pleasant early days, and died out as the planet dried out, before it could develop into the complex variety we see on Earth.

Working from that hypothesis, NASA has been searching for evidence of this ancient life, with Perseverance just starting its microbial-fossil-hunting mission. But are we not giving life enough credit?

From the driest deserts to subglacial lakes beneath hundreds of meters of polar ice, microbes consistently turn up in environments that were previously assumed too hostile for life. And if that’s happening here on Earth, it follows that it should be possible on other planets, too. Especially since studies on the International Space Station have shown that microbes can even survive the airless, radiation-heavy environment of space itself.

That suggests that hardy forms of life might still be thriving on Mars right now. The most likely location is deep beneath the surface – after all, Earth has its own gigantic ecosystem of microbes that lives in the cracks and crevices between rocks, surviving on energy produced in geochemical reactions between rock and water. And for the new study, researchers at Brown University investigated whether Mars might have a similar underground ecosystem.

One particular chemical reaction could be feeding the bugs. Radiolysis occurs when radioactive elements in rocks break water into its hydrogen and oxygen atoms, which microbes can then harvest for energy. On Earth, microbes with this ability have been found living as far as a mile (1.6 km) below the surface, and a similar thing may be occurring on the Red Planet.

“The big implication here for subsurface exploration science is that wherever you have groundwater on Mars, there’s a good chance that you have enough chemical energy to support subsurface microbial life,” says Jesse Tarnas, lead author of the study. “We don’t know whether life ever got started beneath the surface of Mars, but if it did, we think there would be ample energy there to sustain it right up to today.”

We already know that groundwater is present on Mars, and subsurface lakes have even been detected beneath the polar ice caps. Plus much of its ancient water may have seeped downwards, rather than escape into space. Mars is also far less tectonically active than Earth, meaning any microbes could potentially snack away down there undisturbed for billions of years.

To investigate whether radiolysis could indeed be happening on Mars, the Brown researchers studied data from the Curiosity rover and several orbiters, as well as the compositions of a range of Martian meteorites discovered on Earth. Signs of the process included the presence of sulfide minerals, radioactive elements like thorium, uranium and potassium, and pores that could trap water.

In several types of meteorites, the team found all three of these ingredients in amounts that could support microbial ecosystems. A type of rock called regolith breccias, which is older than 3.6 billion years, was the most promising environment for life.

It’s an intriguing find, but one that we may not be able to confirm in the real world any time soon. The depths involved would be well beyond the reach of Perseverance or any other rover. But if there is life on Mars, perhaps other instruments may be able to detect it in other ways. Other studies have suggested that microbes dwelling on or near the surface could find energy from falling space dust.

The research was published in the journal Astrobiology.