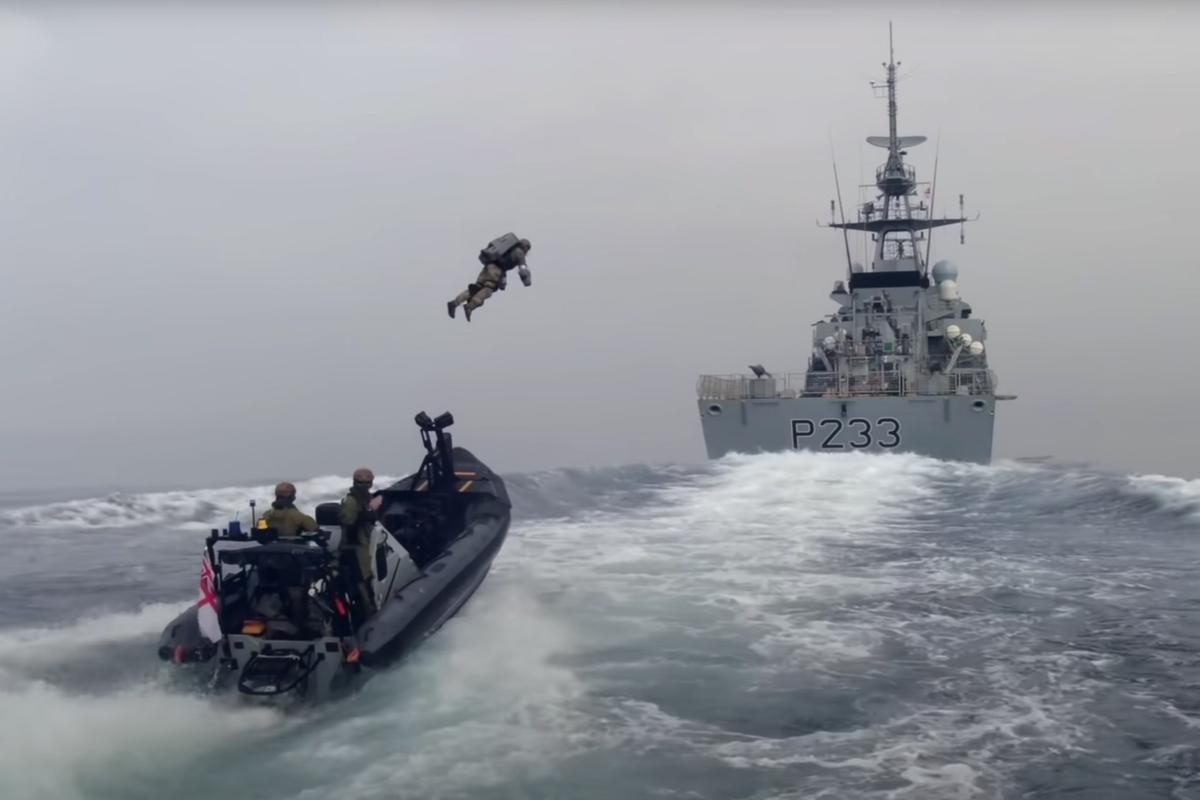 The UK’s Royal Marines put the Gravity jet suit to “very successful” use in ship boarding demo exercises. Gravity Industries
–
By Loz Blain
So they’re more or less stuck doing demonstration flights these days, and as routine as these spectacular demos are becoming, it doesn’t feel like we’re any closer to seeing them hanging on the wall in the outdoor sports aisle at Walmart.
More Stories

Wearables
Sensor-packin’ gloves designed to be a wearable weightlifting coach

But the pioneers in this field have spent untold hours developing and honing their remarkable aircraft and their skills, and they’re as keen as anyone else to see a return on their investments. And military organizations the world over have deep pockets, a wide range of mission capabilities they need to continue honing, and perhaps more to gain than anyone else from the shock and awe potential of airborne super troopers that can approach a situation vertically, riding on ear-splitting personal jet devices.

But how does that look in the real world? Gravity Industries is happy to show us. In a video released this week, three jet suit pilots demonstrated how their unique capabilities could assist in a ship boarding operation.

In one exercise, a jet suit pilot launches from a rigid inflatable in pursuit of a mid-size ship, lands on deck and drops a ladder over the side for the rest of the team to climb up on. In a second, he demonstrates the ability to quickly zip back and forth between the ship and the moving RIB, landing on the small boat even as it bounces around in gentle swells. In a third, three jet suit jockeys land on the deck of this ship in quick succession.

Royal Marines Jet Suit Boarding Ex
–
Gravity called the exercise “very successful,” although I’m not sure exactly what was proven here. And I certainly wouldn’t be rushing to put my hand up for this gig in a live-fire enemy ship boarding. These mini jet turbines verily cleave the sky in twain with their thunderous turbine noise; they’re the opposite of stealth, your chances of landing undetected are zero.

And thus, there you’d be standing, alone and loudly announced, on the deck of an enemy ship with 5-10 kg (11-22 lb) of highly flammable jet fuel strapped to your back. The bad guys would want to put a bullet in your backpack just to see if you’d go flying about like an untied balloon. You wouldn’t be able to defend yourself until you’d wrestled your hands out of your jet gauntlets, hung them up somewhere and got your gun out. And even then, you’re gonna find it hard to run, roll, hide or squat with that giant, explosive turtleshell on your back.

This latter point is something Gravity is working to address; it’s been working with YouTuber and robotics specialist James Bruton to develop a head-tracking shoulder turret that would allow jet suit soldiers to aim and fire a rifle in-flight or on the ground, aiming just by looking.

Jet Suit Head Tracking Shoulder Turret
–
The above video is from 2019, so perhaps the idea has since progressed beyond this embryonic prototype. Either way, the parallels with Marvel’s War Machine, or older sci-fi staples like the Predator or various Japanese gundam weapons are hard to miss, and it’s certainly fun to think about.

Will these things end up seeing action? Who knows. They certainly offer some pretty unique capabilities, but they’re not without their risks and drawbacks, and a man swooping through the sky has zero cover and a great big target on his back. Either way, we’ll be keeping an eye on this sector just because these things are so freakin’ cool.

Loz Blain
Loz has been one of our most versatile contributors since 2007, and has since proven himself as a photographer, videographer, presenter, producer and podcast engineer, as well as a senior features writer. Joining the team as a motorcycle specialist, he’s covered just about everything for New Atlas, concentrating lately on eVTOLs, hydrogen, energy, aviation, audiovisual, weird stuff and things that go fast.
–
17 comments
Sign in to post a comment.
Please keep comments to less than 150 words. No abusive material or spam will be published.
–
Daishi May 4, 2021 01:48 AM
That looks like a ton of fun and the suit + turret is the coolest thing I have seen in a while.
–
Oirinth May 4, 2021 02:57 AM
While suit + turret might be cool, from a military point of view a slow moving, unarmored, very loud, attention grabbing flying thing is called an easy target … or possibly skeet.
–
Bodger May 4, 2021 06:33 AM
As others have said, the person in the suit will be a (flying and) sitting duck and would have basically no chance of surviving. The head-tracking turret looks pretty scary too — look at the picture and imagine that the wearer turns his/her head far to the left. Shooting one’s self in the foot is bad but…
–
michael_dowling May 4, 2021 07:59 AM
Don’t you need to be pretty strong to fly with one of these, as the thrust is directed down from your downward pointing arms, so arm strength would be vital to keep thrust pointing in the right direction. I can see this suit being useful for getting first aid to inaccessible spots, but for military use, as Oirinth and Bodger said, you would be a prime target for ground based bad guys.
–
Jason Woody May 4, 2021 10:21 AM
Nice Project,
I kept coming up with many ideas about how to improve this setup.
Like having a pivot point attached to the backpack with servo powered joints to releave the operator having to use muscle power as much.
And mostly I feel having the gimbal horizontal axis only move 20 degrees, no reason for 90 degree of rotation but 20 or so would definitely help instead of the operator trying to pivot to the sides to aim.
I want to fly one.
–
Adrian Akau May 4, 2021 03:03 PM
I say it is a waste of time.
–
guzmanchinky May 4, 2021 04:12 PM
There’s always someone with a cooler career than you. Except for this guy. No one has a cooler career than him…
–
alexD May 4, 2021 05:14 PM
I see the value of it as a “mini chopper missions” but *evidently*, no one is fool enough to try the same on an enemy vessel….. Oh look, a flying duck… “hoh hoh hoh… it’s not wabbit season… it’s duck season”…
–
rpark May 4, 2021 05:29 PM
…I suppose weaponized drones could go in first to ‘soften’ resistance, and then the armed jet pilots.
–
Phil H Spector May 4, 2021 06:13 PM
I think this is a terrific idea.
Phil Spector
Load More
–