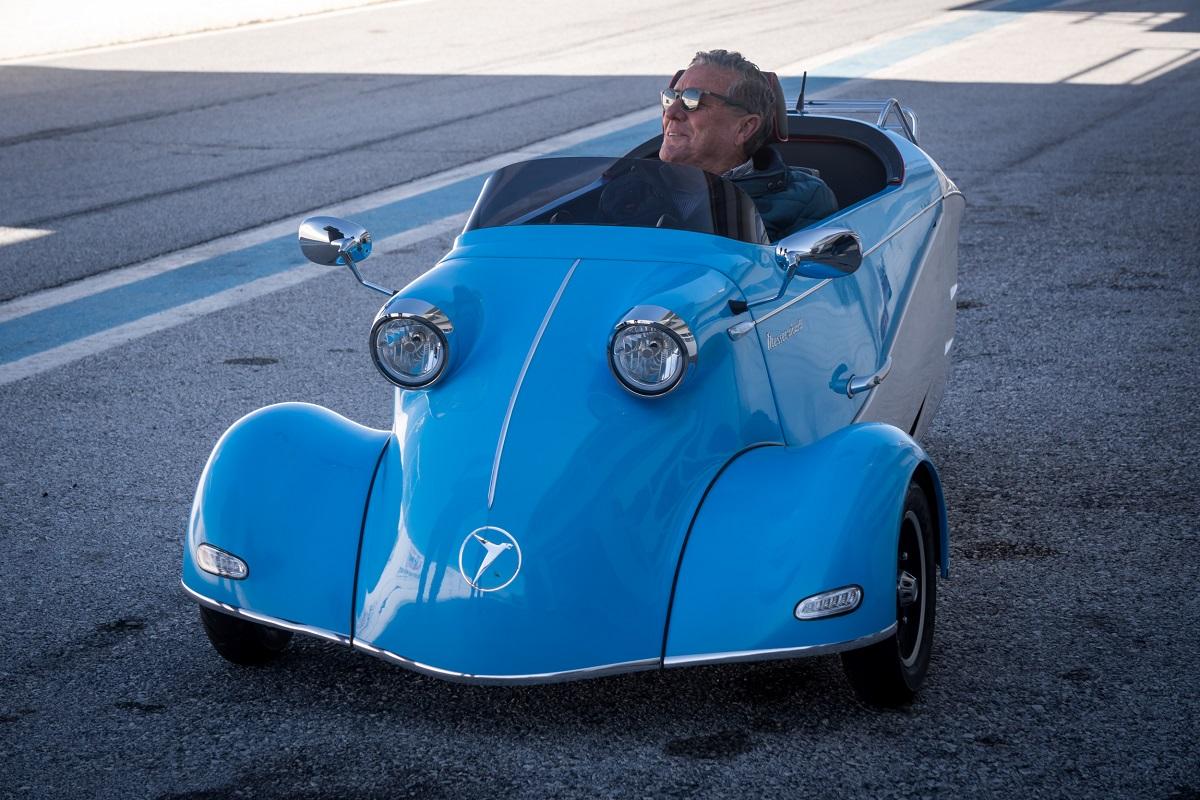 Automotive
Porsche unleashes its all-electric Macan on the open road

Both new Messerschmitt models feature fiberglass bodywork atop a hot-dipped galvanized steel and aluminum honeycomb hybrid chassis. A Perspex windshield is included, but since the new three-wheeler design is based on the original KR-200 Sport open roadster, the dome hardtop is optional. Hydraulic disc brakes on the two front wheels and single rear wheel provide stopping power, and a suspension system with adjustable spring dampers smooths out the road below.

Inside the locking swing-up entry, each KR comes equipped with a pair of belted seats laid out in tandem and a simple cockpit with gauges, F1-style steering wheel and handbrake. There’s also a USB charging port and under-hood storage compartments.

The KR-E5000 has a very similar 6.7-hp (5,000 watt) output and 56-mph top speed courtesy of its permanent-magnet motor. It suffers in range, however, dropping down to 50 miles (80 km) via a small 1.4-kW lithium-iron-phosphate battery that charges in four to six hours. Buyers can double that range by adding an optional second battery. The single-battery electric roadster weighs less than the gas variant, wearing an estimated 430-lb (195 kg) ready-to-drive weight.

According to a spec list from The Bruce Weiner Microcar Museum, the original Messerschmitt KR-200 Sport weighed in at 507 lb (230 kg), slightly heavier than either of these reborn variants.

Messerschmitt Werke began production of its newest models in España (Spain) earlier this year. It is currently offering the KR-202 Sport for special pricing starting at €10,950 (approx. US$13,200) and the KR-E5000 Sport starting at €12,950 ($15,600), before VAT and €690 European shipping fee. Options include the aforementioned hardtop, two-stage electric heating, AM/FM/Bluetooth radio and a chrome luggage rack.

See the Messerschmitt KR-202 Sport intro video below. And if you decide it’s ultimately not the modernized post-WWII microcar for you, there’s always the all-electric Microlino 2.0.

C.C. Weiss
Chris joined the New Atlas team in 2011 and now serves as the automotive and campers editor, traveling extensively to gather the latest news on cars, outdoor sports gear and other innovations designed to help people experience and enjoy the greater world around them.
–
11 comments
Sign in to post a comment.
Please keep comments to less than 150 words. No abusive material or spam will be published.
–
Brian Gale May 3, 2021 08:06 PM
I always thought it would be India or China that came out with an inexpensive post-pandemic car and play the same roles that the original VW beetles did post World Wat II. I think the Germans are doing it again with this vehicle. I could see that a second-hand model two or three years old will fit into my auto budget just like the original bugs did.
Daishi May 3, 2021 10:33 PM
I’m not sure if the range of 50 miles on a 1.4-kW battery pack is accurate. The Arcimoto has a higher top speed (70 MPH) but it achieves 100 miles city range with a 19.2 kWh battery pack and boasts 174 MPGe. At 55 MPH the Arcimoto drops to 66 miles of range. I’m aware the Messerschmitt is smaller and lighter than the Arcimoto but the MPGe figures needed to achieve the listed range would need to be 6.7x higher than the Arcimoto or about 1,166 MPGe. I know there are many electric bicycles capable of over 1,000 MPGe but it would be..challenging in something 500 lbs with a 5,000 watt motor intended to travel at faster than bicycle speeds. Arcimoto acquired Tilting Motor Works with the goal of building “platform 2” which is 150 lbs, 3 kWh, and has a 85 mile range but even that is probably optimistic.
Dan Lewis May 4, 2021 08:41 AM
I wish they’d pull their heads out and go with 4 wheeler of similar size.
All 3 wheelers are ‘pot hole finders’.
Neatmachine May 4, 2021 08:52 AM
Do these vehicles meet U.S. safety regulations (i.e. airbags, seatbelts, etc.)?
DavidB May 4, 2021 09:02 AM
@Dan Lewis: So, to deal with the potholes caused by heavier four-wheeled cars, we should all drive heavier four-wheeled cars?

I suggest we all drive the lightest vehicles possible and fix the potholes, instead.

Once the bar is set this high, you’d think other established car companies would at least try to match it.

Trylon May 5, 2021 03:30 PM
Neither the Messerschmitt nor the Microlino thrill me. I wouldn’t mind getting the Nimbus Halo, but it has all the hallmarks of being vapor that will never make it to market.
https://newatlas.com/urban-transport/nimbus-tilting-three-wheeled-ev/
Mike May 6, 2021 08:09 AM
Looks great, a usable toy for sure. Surprised they didn’t go for a 250 or 300 scooter motor though.
Ralf Biernacki May 8, 2021 05:03 AM
I SO want to see Jeremy Clarkson test one.
Load More
–