Newly-calved iceberg A-76 was captured by satellites by the Copernicus Sentinel-1 mission, ESA said Wednesday. The space agency said that the surface area of the iceberg is 1,668 square miles, measuring 106 miles long and 15 miles wide.

The name of the iceberg refers to the region it first calved from. It is the 76th iceberg to be tracked by the U.S. National Ice Center. 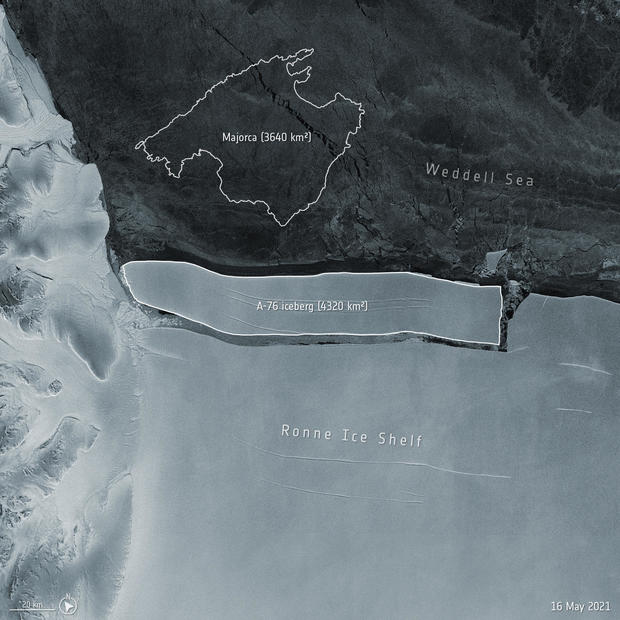 Newly-calved iceberg A-76 was captured by satellites by the Copernicus Sentinel-1 mission. The European Space Agency compares its size to the Spanish island Majorca.  European Space Agency
–
A-76 broke away from the western side of the Ronne Ice Shelf, one of the largest of Antarctica’s ice sheets. It was first spotted by Dr. Keith Makinson and the British Atlantic Survey and confirmed by the U.S. National Ice Center using Copernicus Sentinel-1 imagery.

The event pushes iceberg A-23A, which is 1,305 square miles and also floating in the Weddell Sea, into second place for the world’s largest icebergs.

Iceberg A68a, which was at one point the world’s largest, was set on a collision course with a remote South Atlantic island last November, threatening the home of thousands of penguins and other wildlife, but broke into smaller chunks before it reached the island. That iceberg measured about 93 miles long and 30 miles wide.

Periodic calving of ice shelves is part of a natural cycle. Ted Scambos, a research glaciologist at the University of Colorado at Boulder, told Reuters that this calving does not appear to be linked to climate change.

Scambos said that the ice shelf was already floating in the sea before breaking off, so the event does not raise ocean levels, whereas glaciers and ice sheets, found on land, do raise sea levels when they break off into the ocean. He added that the Ronne Ice Shelf has “behaved in a stable, quasi-periodic fashion” over the past century.

But scientists believe the rapid disintegration of several large icebergs in recent years may be linked to global warming — these events are now happening more frequently. In just the past few years, researchers have become alarmed at several areas in Antarctica which are showing signs of instability due to a warming climate and shifting ocean and atmospheric currents.

–
Be the first to know
Get browser notifications for breaking news, live events, and exclusive reporting.
–
–
–
(For the source of this, and many other equally intriguing and important articles, please visit: https://www.cbsnews.com/news/iceberg-antarctica-largest-break-off/)