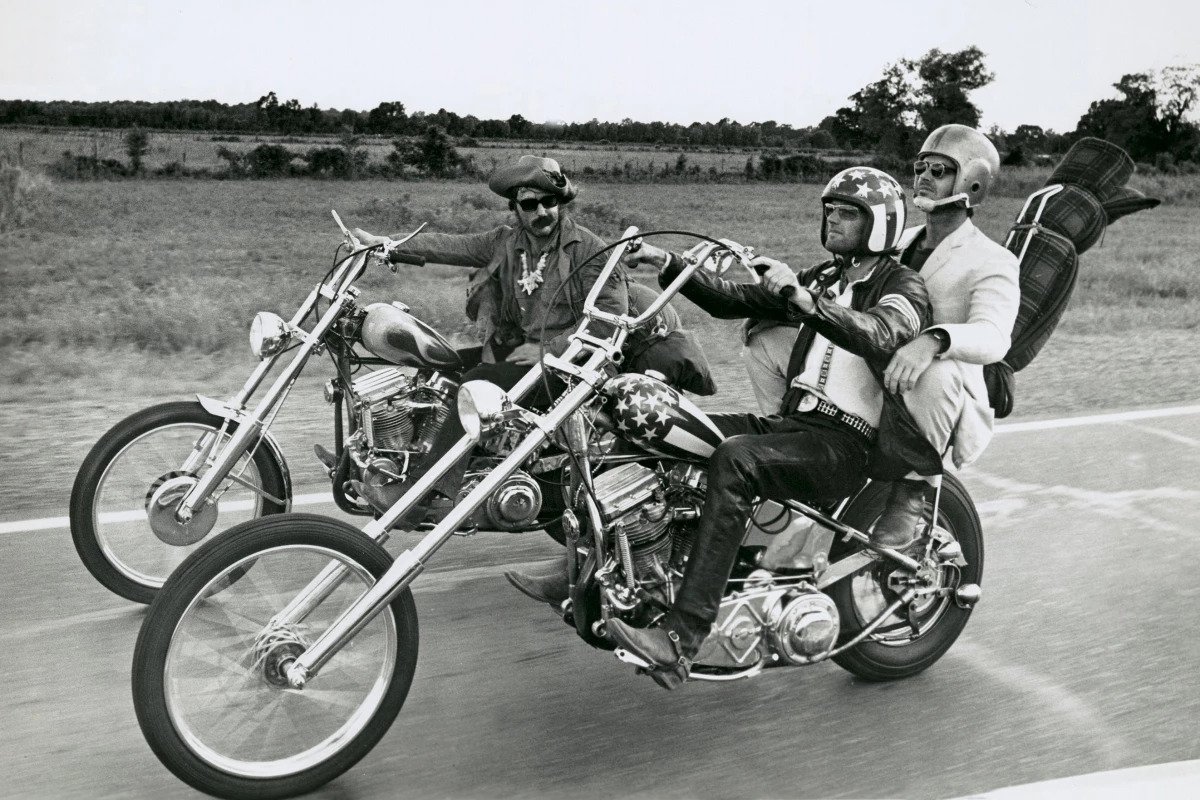 The most recognizable motorcycle in the world has two claimants, and both were built and certified as being “the original” by Dan Haggerty, aka Grizzly Adams. The bike going to auction next week appears to have a more credible claim. Columbia Pictures

View 37 Images
–
By Mike Hanlon
–
With “no reserve” being posted on the sale price, the bike is certain to sell and although the estimate quoted shows between $300,000 and $500,000, the “other Captain America,” an identical bike with a less credible claim to authenticity, sold at auction in 2014 for US$1.62 million ($1.35 million hammer price plus buyers premium). Rumor suggests that the sale fell through after the auction, then was concluded for a lesser amount. 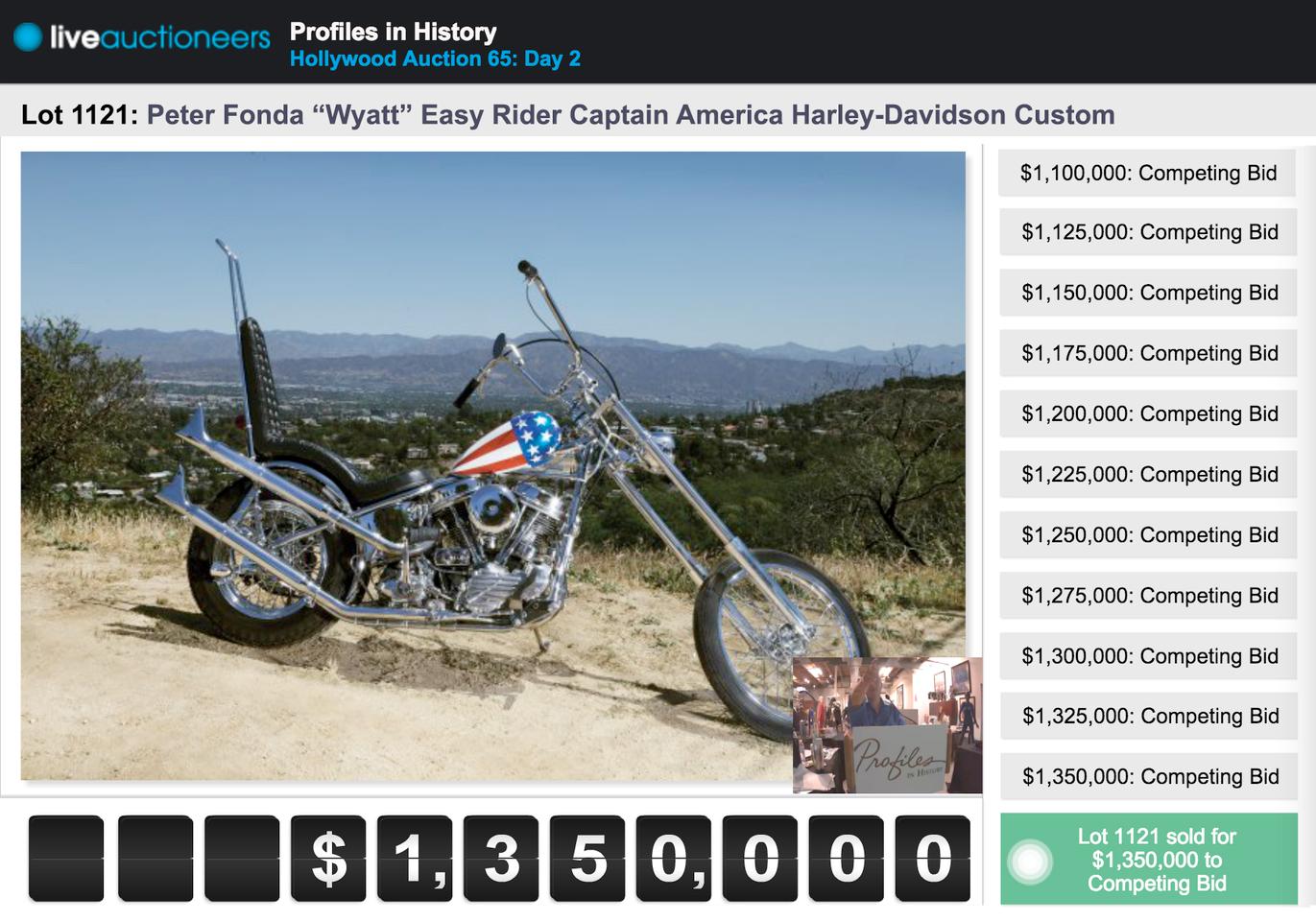 The liveauctioneers online bidding module from the Profiles in History auction of the other Captain America bike on 2014 Oct 19 shows the highest bids ever lodged for a motorcycle at auction. The final hammer price of $1,350,000 was effectively $1.62 million including buyers premium. The sale reportedly fell through after auction and a lesser amount is believed to have been paid.   Profiles in NewAtlas.com

Unquestionably the world’s most valuable motorcycle, the Captain America chopper has been plagued by a series of cruel mishaps, not just in the film, but seemingly ever since.

In the immediate aftermath of the film’s production, all of the intact bikes (both bikes used in the film by Dennis Hopper as Billy and the remaining intact Captain America bike ridden by Peter Fonda as Wyatt) were stolen just as shooting finished and have never been seen again. Like most Harley-Davidsons that drop off the register, they have most likely been broken into spare parts. So much mistruth has been spouted by so many of the eye-witnesses to what took place, that no one is even sure if the bikes were stolen at gunpoint or not.

The only remaining motorcycle after that theft was partially burned in the final scene of the film. The burned remains were given to Dan Haggerty by his friend and Easy Rider’s writer, producer and star Peter Fonda. The bike remained in its burned state in storage for almost 20 years. Haggerty is perhaps the most problematic of the bike’s woes as his actions resulted in two identical motorcycles being created that both lay claim to be the only surviving motorcycle from the landmark film.

The bike was reassembled and restored in the early 1990s by Haggerty and Gary Graham. Graham viewed the burned remains of the bike in Haggerty’s basement, made note of the engine numbers, and struck a deal that resulted in him financing the restoration of the bike and its subsequent touring and showing at the Iowa State Fair.

As a result of this financial arrangement with Haggerty, in 1994 Graham added the restored Captain America to his personal collection of motorcycles which also included vehicles from Elvis Presley, Steve McQueen, Evel Knievel, Anne Margaret, and Marilyn Monroe.

After touring and showing the bike for the best part of two years, Graham sold his collection at a Dan Kruse Auction in San Antonio, Texas on March 16 & 17, 1996, with the Captain America bike being regaled by Haggerty as 90 percent original parts from the movie bike, just prior to crossing the auction block. The bike was sold to Gordon Granger of Texas who paid $63,500 for the privilege of owning the best-known motorcycle in the world.

The vendor, Gary Graham, was involved in the restoration to some degree, and given his close association with the project from the original burned bike to the restored bike we see at auction today, it seems almost inconceivable that this is not the authentic Captain America bike.

After the bike had spent a considerable period of time on display at the National Motorcycle Museum in Anamosa, Iowa, Parham sold it to Los Angeles Movie Memorabilia collector Michael Eisenberg in early 2014, who “flipped” the bike, sending it to auction at Movie Memorabilia auction house Profiles in History in October 2014. Eisenberg offered 10 percent of the value of the bike to Fonda for his validation that it was the original burned bike and help with the promotion of the auction. Fonda declined.

Profiles in History has a track record for achieving high prices for movie memorabilia, having sold Marilyn Monroe’s “Subway” Dress from The Seven Year Itch for $5.52 million, Audrey Hepburn’s Ascot Dress from My Fair Lady for $4.44 million, Judy Garland’s ruby red Dorothy slippers from The Wizard of Oz for more than $2 million, Steve McQueen’s racing suit from Le Mans for $960,000, and the Lion costume from The Wizard of Oz for $805,000, among many record sales.

The company did it again with the Captain America chopper, eliciting the highest bid ever made at auction for a motorcycle of $1.35 million – that’s US$1.62 million including the buyer’s premium. What happened next, we’re not quite sure. The authenticity of the motorcycle was very publicly brought into question in the days prior to the auction, Peter Fonda publicly retracted his validation, saying that Haggerty had duped him and that “there’s a big rat stinking someplace in this.”

We contacted Profiles in History regarding the rumors that the sale had fallen through and the response was “the bike was sold and announced back in October at the auction. We are not discussing the sale of the bike any further.” All other rumors suggest the sale was eventually concluded at a slightly lesser price but no public statements have been made since.

Just how much the more credible of the two Captain Americas will fetch at auction is going to be one of the great spectator sports of 2021. The best-known motorcycle from one of the great counterculture classic films, Easy Rider, seems certain to become the most valuable motorcycle ever sold at auction.

Mike Hanlon
As a photojournalist, Mike’s work was published in a dozen languages across 20+ countries. He went on to edit or manage over 50 different print publications, each with a different target audience: sports, automotive, advertising, marketing, design, ad infinitum. Mike has been working in the internet for more than 20 years and was the veteran of five internet start-ups before founding New Atlas in 2002.
–
3 comments
Sign in to post a comment.
Please keep comments to less than 150 words. No abusive material or spam will be published.
–
David V May 2021 May 26 – 03:59 AM
Doubt we’ll ever know the whole truth about the bikes. I’d always read that they no longer existed. Disappeared after the film. Not my money anyway.
There is a close copy in France – with a front brake though – kudos to Peter Fonda for riding that bike for the film. It’s not easy to ride. Still, a legend.
–
Expanded Viewpoint 2021 May 26 – 08:48 AM
It’s tragic how the promise of “Easy Money” can wreck so many relationships! What the heck was Haggerty thinking there? What a mental disconnect, to believe that he could create a “second original” of anything! Obviously, he doesn’t understand the concept of “unique”, “original”, “first”, “only” or FRAUD either!!!
Now if the situation was that they had a “hero” bike for the movie, and a stand in for certain shots, and each one was identified as such, stuff like this wouldn’t happen, no one would get ripped off and the truth would prevail. Would the final scene bike left as is, if that was the case, sell for more than the “hero” bike? Quite possibly!!
–
minivini 2021 May 26 – 11:22 AM
I guess I’ll forever remember Haggerty as Shizzly Adams.
–