While on a routine patrol, Greg Francek came across bone fragments from prehistoric animals that existed millions of years before humans. 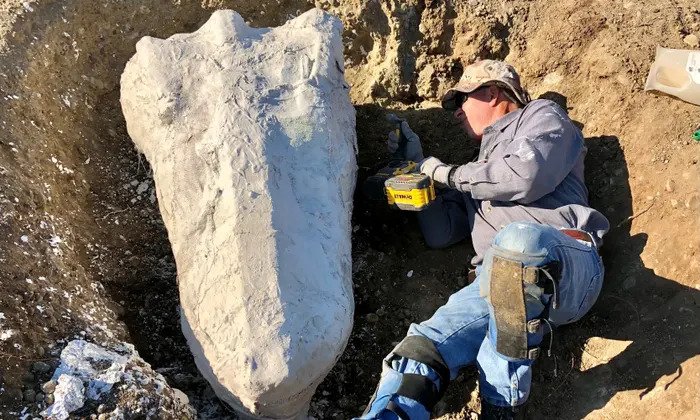 Imagine a California with volcanoes erupting to the east and Los Angeles buried under the Pacific Ocean. Giant camels, rhinoceros and four-tusked miniature elephants graze on a lush landscape, only to be preyed upon by bone-crushing dogs.

–
This is the prehistoric scene conjured up by a trove of new fossils discovered in California’s Sierra foothills – a hugely significant find, and one of the largest in the state’s history.

The find, on a huge tract of pristine land maintained by the East Bay Municipal Water District (EBMUD) has scientists scrambling to piece together bone fragments that they believe tell a story of climate change from five to 10m years ago.

The discovery began last summer, when Greg Francek, a water district ranger, spotted a funny-looking rock with markings vaguely resembling bark, while on a routine patrol of 28,000 acres of EBMUD land on the eastern rim of California’s Central Valley.

It turned out to be a petrified tree. Francek poked around further and found a whole grove of petrified trees and then realized the area was scattered with thousands of bone fragments.

“It started with me being at the right place at the right time and having an eye for something that was a bit out of place,” said Francek, who has been a ranger and naturalist with the water district for 10 years. “I didn’t realize what I was looking at was actually the remains of great beasts that had walked this area millions of years before.”

Soon scientists were unearthing fossils from a whole zoo of prehistoric animals that existed in the time period known as the Miocene Epoch. It was more than 50m years after dinosaurs roamed the continent and it would be millions of years more before humans appeared. It was an age when the mastodons wandered North America. Volcanic activity and shifting geologic plates had not yet formed the Sierra Nevada and most of southern California was still under water.

Russell Shapiro, a geology professor at California State University, Chico, said when Francek first took him to the area, spread over several miles on land that is closed to the public, he was amazed at how many different animals’ fossils appeared in one place.

“Greg was showing me these spots and we were like “Oh my God, that’s a horse; that’s a camel; that’s a rhinoceros; that’s a tortoise,” he said. “It was all right there.”

Shapiro and other scientists have begun a detailed excavation and study of the findings, under the water district’s enthusiastic supervision. “It’s pretty unique,” Shapiro said. “It’s an extremely rich site.”

While much research remains to be done to understand the skeletal fragments, they have already made several exciting discoveries, including the bones of horses that may have had three toes and giant camels with giraffe-like necks that would have allowed them to eat out of 20ft trees.

One of the most common animals at the site seems to have been gomphotheres, elephant-like creatures with four tusks, two above and two below their mouths, described as being small enough to “walk in through your front door”. The scientists also found the remains of one fish that was as much as four feet long, and the nearly intact skull of a mastodon complete with tusks. They also found bone fragments of tapirs, tortoises and birds.

The remains of predators have been harder to find. The researchers have found a few bone fragments from still-unidentified carnivores. But teeth marks found in some of the other bones, and a few petrified poops, suggest that the grazing animals might have been hunted by the wild dogs known to have wandered North America at the time. One type was the fierce beardog, which could grow to 8ft long. Another extinct breed was the Borophagus, or the bone-crushing dog, which hunted or scavenged large grass-eaters and then crunched their bones for nutritious marrow.

The findings suggest a great grazing land, with herbivores feeding on a lush landscape that was at the time shifting from forests to grasslands.

“We’re still trying to figure out who’s who at the zoo,” said Francek, who said there is much to be learned about the species being unearthed at the site.

Shapiro said the fossil find gives glimpses of a time when the planet’s climate was shifting from a warmer to a cooler period and, in California, dense forests were turning into grasslands. While it’s not clear whether the creatures all lived at one time or over successive generations, it’s possible that the animals were all trapped in a volcanic mudflow, he said.

“The whole planet started to cool down at this time, ultimately leading to ice ages,” said Shapiro. “So what’s really cool about this site is that you can see classic forest creatures as well as grassland creatures.”

The water district, which provides water for 1.4 million people living in the San Francisco east bay area, is being careful not to reveal the exact location of the site for fear that people might disturb or loot it. But EBMUD has prepared an online tour of the findings for classrooms and the public.

The fossils are being taken to Chico State, where students are getting a chance to help prepare them for further study by a broad array of scientists. Eventually the materials will be transferred to the University of California Museum of Paleontology in Berkeley, where they can be displayed and accessed by researchers worldwide.

Both Shapiro and Francek said they are thrilled that EBMUD wants to preserve and study the findings.

“What an opportunity to get people excited about science again,” said Shapiro. “People get so interested when they realize what’s in their own back yards.”