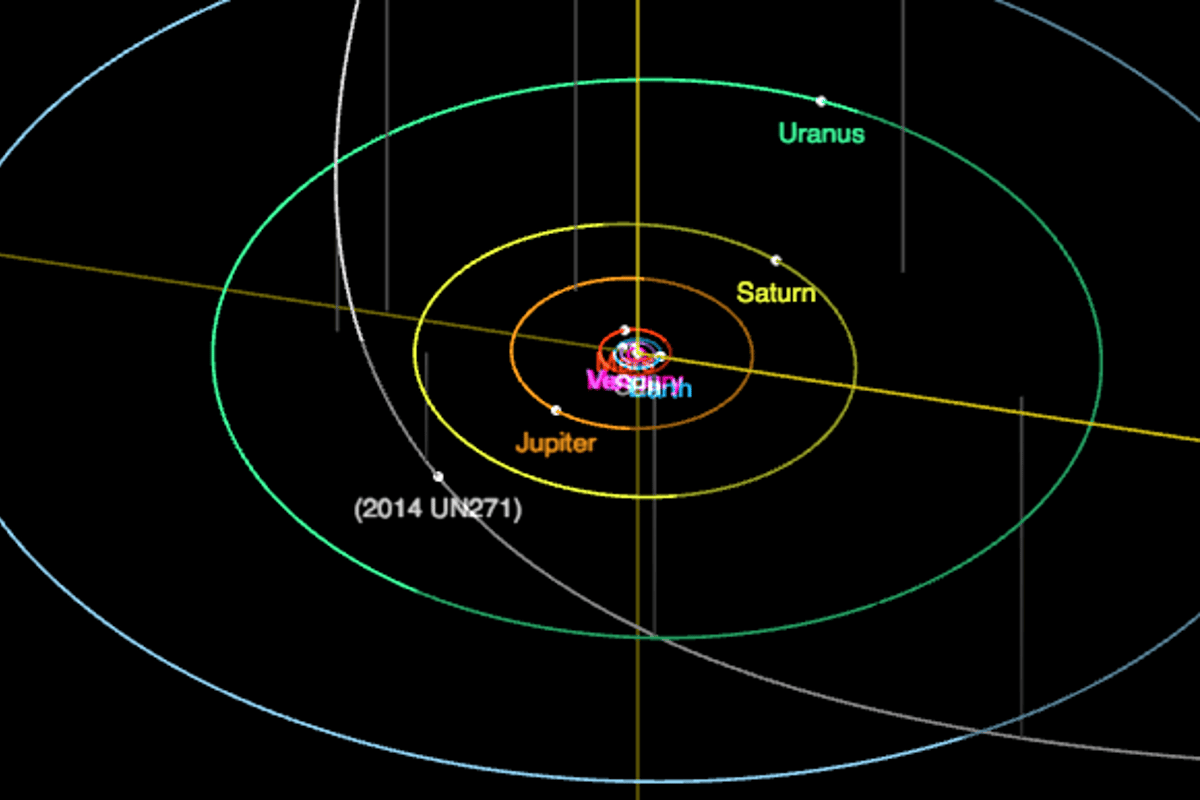 A diagram of the orbit path of 2014 UN271, which will make its closest pass in 2031. JPL Solar System Dynamics

The object in question is designated 2014 UN271, and it was only recently identified in data from the Dark Energy Survey captured between 2014 and 2018. Size estimates place it anywhere between 100 and 370 km (62 and 230 miles) wide. If it’s a comet, it’s quite a big one, especially for one coming from the outer solar system.

“[That] puts it on a similar scale, if not larger than, Sarabat’s huge comet C/1729 P1, and almost undoubtedly the largest Oort Cloud object ever discovered – almost in dwarf planet territory!” says Sam Deen, a citizen astronomer, in a post on the Minor Planet Mailing List (MPML) forum.

But by far the most intriguing thing about 2014 UN271 is its orbit around the Sun. This thing is extremely eccentric, journeying between the inner solar system and the Oort cloud that marks the boundary of interstellar space over a period of 612,190 years.

And it turns out, astronomers are about to witness the closest pass of this incredible round trip. Currently, 2014 UN271 is about 22 Astronomical Units (AU) from the Sun (for reference, Earth is 1 AU from the Sun). That means it’s already closer than Neptune, at 29.7 AU. And it’s not stopping there – it’s already traveled 7 AU in the last seven years, and at its closest in 2031, it’s expected to pass within 10.9 AU of the Sun, almost reaching the orbit of Saturn.

Before then, it’s expected to develop the characteristic coma and tail of a comet, as icy material on its surface vaporizes from the heat of the Sun. This close pass would give astronomers an unprecedented close look at Oort cloud objects.

Unfortunately for us amateurs on the ground, don’t expect to see a show on the scale of Halley’s comet. While it’s too early to tell for sure, Deen calculates that 2014 UN271 would, at best, become about as bright as Pluto in the night sky, but more likely it’ll reach the brightness of Pluto’s moon Charon. Still, we’ll probably get some amazing shots from telescopes and observatories of the time.

After its close pass, 2014 UN271 will then hurtle back out into the inky blackness, on a several-hundred millennia return trip to the Oort cloud, and an incredible peak distance of almost 60,000 AU.

Load More
7 comments
Sign in to post a comment.
Please keep comments to less than 150 words. No abusive material or spam will be published.
–
MattII June 21, 2021 01:23 AM
might be worth sending a probe to.
Signguy June 21, 2021 09:23 AM
Soooo, what keeps this thing in “orbit” around our sun? Why wouldn’t it just go off into space? Surely our sun doesn’t have such a powerful effect?
Robert Rasmussen June 21, 2021 11:06 AM
Re: Signguy – the simple answer is gravity our sun is pretty amazing
David Theil June 21, 2021 04:15 PM
How did the author come up with a 60,000 AU semi-major axis? If the period is ~600,000 years Keplers third law makes the semi-major axis ~7000 AU. Hardly Oort cloud unless inclination to the ecliptic is large, though certainly Kuiper Belt.
Gary Frost June 21, 2021 08:42 PM
Depending on where Saturn or even Jupter is in it’s orbital path at the time the comet reaches it’s closest point to the sun is there any potential this comet could be pulled from it’s orbit and sent into the asteroid belt or inner solar system? If so things might get interesting in 2031.
HoppyHopkins June 21, 2021 10:24 PM
The author needs to go back to school, the boundary for the inner planets is inside the orbit of Jupiter not Saturn. That being said, I wonder if it is part of the newly discovered second plane of the ecliptic orbits
paul314 June 22, 2021 09:13 AM
Just for reference, 60,000 AU is a few percent short of 1 light-year.
–
Tweet