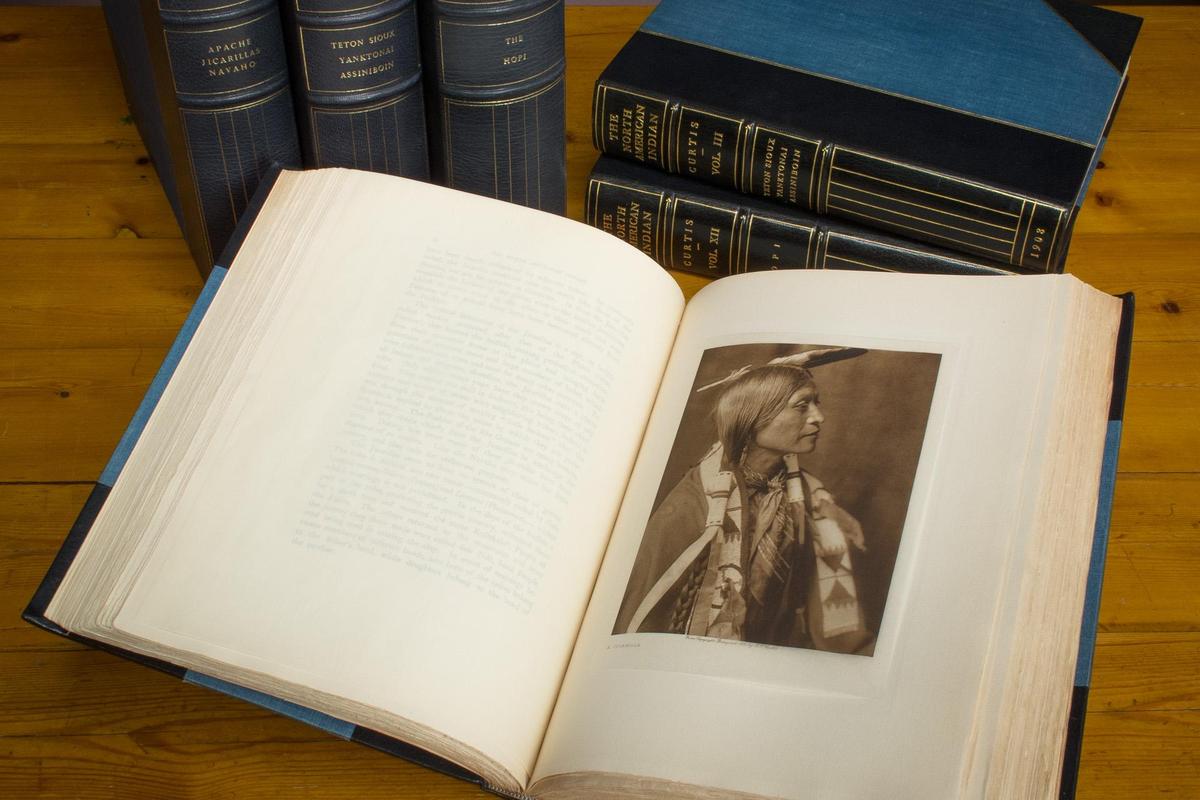 The record price for a complete 40-volume set was established by Christie’s in New York in April 2012 when a complete subscriber’s set of Curtis’s monumental work fetched $2,882,500 to become one of the most valuable scientific artifacts ever sold at auction. The price of $950,000 fetched by Santa Fe Art Auction represents a new record for a 20-Volume set.  Christopher Cardozo Fine Art

Just 272 copies of Curtis’ 40-volume magnum opus were published between 1907 and 1930 in one of the most expensive undertakings in the history of book production.

According to author and critic A.D. Coleman, The North American Indian is “an absolutely unmatched masterpiece of visual anthropology, and one of the most thorough, extensive and profound photographic works of all time.”

The set that sold last Saturday at Santa Fe Art Auction may not have included the 20 Supplemental Portfolios but it does have an unmatched provenance as it belonged to the late dealer, collector and republisher of The North American Indian, Christopher Cardozo (1948-2021).

Cardozo was so enamored with the work of Curtis that he spent 50 years trading Curtis books, portfolios, and photogravures, during which time he collected the auctioned deluxe tissue paper set in parts over a seven-year period.

As a dealer in Curtis’ work, Cardozo identified what he believed was a sizeable marketplace of people who wanted a complete copy of the original publication, but could not afford one due to the extreme prices being fetched by the originals.

The record price for a complete 40-volume set was established by Christie’s in New York in April 2012 when a complete subscriber’s set of Curtis’s monumental work fetched $2,882,500 to become one of the most valuable scientific artifacts ever sold at auction.

So in 2014, Cardozo set out to republished a limited edition set of 75 exact copies of the entire work on fine art paper, an extraordinary undertaking that is unquestionably the largest republication project in North American publishing history, requiring over 10,000 hours of research, typesetting, layout, prototyping, proofing, and over 40,000 hours from specialists across eight diverse fields.

In 2016 the Limited Edition was released, hand-bound in leather, with archival linen-finished paper, and gilded with the highest artisan bookmaking standards. The recreation of Edward Curtis original includes all twenty original volumes, over 5,000 pages with extensive transcripts of Native language and music. The twenty portfolios that accompanied the original set are recreated in five oversized portfolio volumes. Each set comprises all 2,234 photographs contained in the original and a handful of the 75 limited sets are still available at US$37,500 each.

If you’d like to read the entire edition of the original book, HTML, EPUB and Kindle editions can be downloaded free of charge via Project Gutenberg.

Mike Hanlon
As a photojournalist, Mike’s work was published in a dozen languages across 20+ countries. He went on to edit or manage over 50 different print publications, each with a different target audience: sports, automotive, advertising, marketing, design, ad infinitum. Mike has been working in the internet for more than 20 years and was the veteran of five internet start-ups before founding New Atlas in 2002.
–