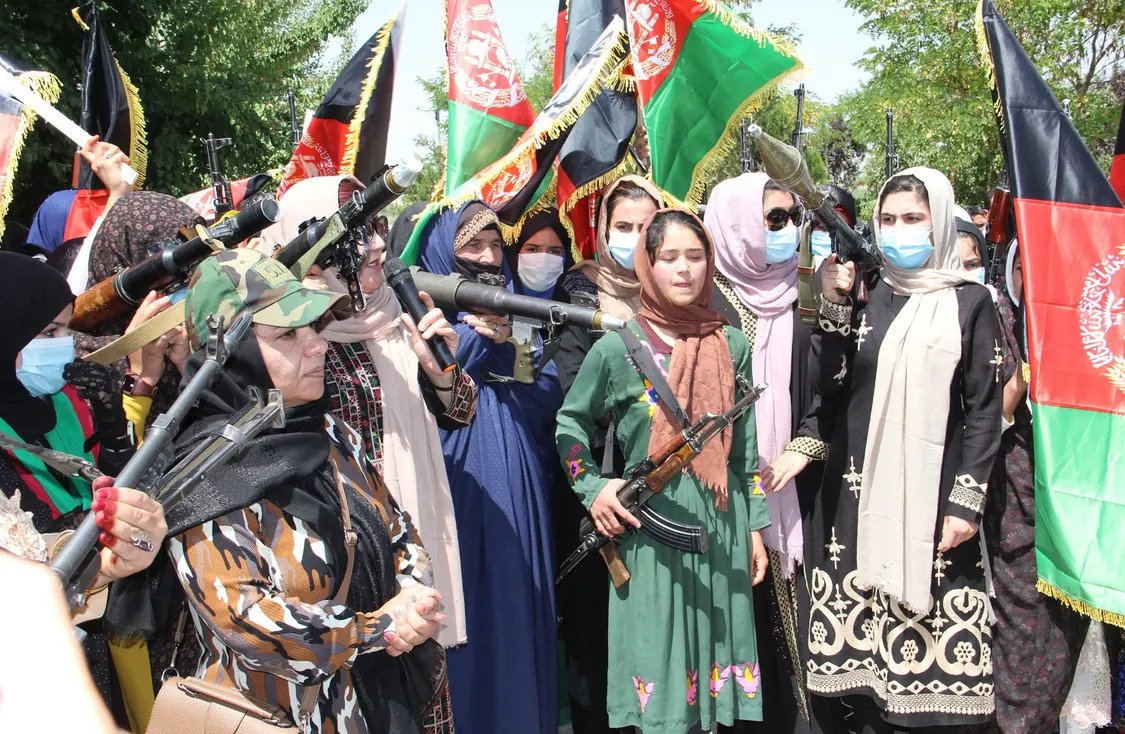 One of the biggest demonstrations was in central Ghor province, where hundreds of women turned out over the weekend.  Photograph: Facebook
–

by Emma Graham-Harrison in Kabul
Last modified on 2021 Jul 08
–
Women have taken up guns in northern and central Afghanistan, marching in the streets in their hundreds and sharing pictures of themselves with assault rifles on social media, in a show of defiance as the Taliban make sweeping gains nationwide.

One of the biggest demonstrations was in central Ghor province, where hundreds of women turned out at the weekend, waving guns and chanting anti-Taliban slogans.

They are not likely to head to the frontlines in large numbers any time soon, because of both social conservatism and lack of experience. But the public demonstrations, at a time of urgent threat from the militants, are a reminder of how frightened many women are about what Taliban rule could mean for them and their families.

“There were some women who just wanted to inspire security forces, just symbolic, but many more were ready to go to the battlefields,” said Halima Parastish, the head of the women’s directorate in Ghor and one of the marchers. “That includes myself. I and some other women told the governor around a month ago that we’re ready to go and fight.”

The Taliban have been sweeping across rural Afghanistan, taking dozens of districts including in places such as northern Badakhshan province, which 20 years ago was an anti-Taliban stronghold. They now have multiple provincial capitals in effect under siege.

In areas they control, the Taliban have already brought in restrictions on women’s education, their freedom of movement and their clothing, activists and residents of those areas say. In one area, flyers were circulating demanding that women put on burqas.

Even women from extremely conservative rural areas aspire to more education, greater freedom of movement and a greater role in their families, according to a new survey of a group whose voices are rarely heard. Taliban rule will take them in the opposite direction.

“No woman wants to fight, I just want to continue my education and stay far away from the violence but conditions made me and other women stand up,” said a journalist in her early 20s from northern Jowzjan, where there is a history of women fighting.

She attended a day’s training on weapons handling in the provincial capital, which is currently besieged. She asked not to be named in case it falls to the Taliban. “I don’t want the country under the control of people who treat women the way they do. We took up the guns to show if we have to fight, we will.”

She said there were a few dozen women learning to use guns with her, and despite their inexperience they would have one advantage over men if they faced the Taliban. “They are frightened of being killed by us, they consider it shameful.”

For conservative militants, facing women in battle can be humiliating. Isis fighters in Syria were reportedly more frightened of dying at the hands of female Kurdish forces than being killed by men.

It is rare, but not unprecedented, for Afghan women to take up arms, particularly in slightly less conservative parts of the country. Last year a teenager, Qamar Gul, became famous nationwide after fighting off a group of Taliban who had killed her parents. The militants included her own husband.

In Baghlan province, a woman called Bibi Aisha Habibi became the country’s only female warlord in the wake of the Soviet invasion and the civil war that followed. She was known as Commander Kaftar, or Pigeon.

And in northern Balkh, 39-year-old Salima Mazari has recently been fighting on the frontlines in Charkint, where she is the district governor.

Women have also joined Afghanistan’s security forces over the past two decades, including training as helicopter pilots, although they have faced discrimination and harassment from colleagues and are rarely found on the frontlines.

The Taliban shrugged off Afghanistan’s historical precedents, claiming the demonstrations were propaganda and men would not allow female relatives to fight.

“Women will never pick up guns against us. They are helpless and forced by the defeated enemy,” said a spokesperson, Zabihullah Mujahid. “They can’t fight.”

The Ghor provincial governor, Abdulzahir Faizzada, said in a phone interview that some of the women who came out in the streets of Firozkoh, the provincial capital, had already battled the Taliban, and most had endured violence from the group.

“The majority of these women were those who had recently escaped from Taliban areas. They have already been through war in their villages, they lost their sons and brothers, they are angry,” he said. Faizzada added that he would train women who did not have experience with weapons, if the government in Kabul approved it.

The Taliban’s conservative rules are particularly unwelcome in Ghor, where women traditionally wear headscarves rather than covering themselves fully with the burqa, and work in fields and villages beside their men, Parastish said.

The Taliban have banned women even from taking care of animals or working the land in areas of Ghor they control, she added. They have closed girls schools, ordered women not to leave home without a male guardian and even banned them from gathering for weddings, saying only men should attend.

Women from these areas were among those who marched. “More than a dozen women have escaped from Allahyar in Shahrak district last week and came to us and asked for guns to go and fight for their lands and freedom. The same situation is in Charsadda region,” Parastish said.

“Women said: ‘We are getting killed and injured without defending ourselves, why not fight back?’ They were telling us that at least two women were in labor in their region, with no medical things around and they couldn’t come with them.”

For now, she said, the main thing holding the women back was the men in power. “The governor said there is no need for us now and they will let us know.”