On the 500th anniversary of the Spanish conquest, people from Mexico’s smallest state Tlaxcala say their ancestors were liberators – 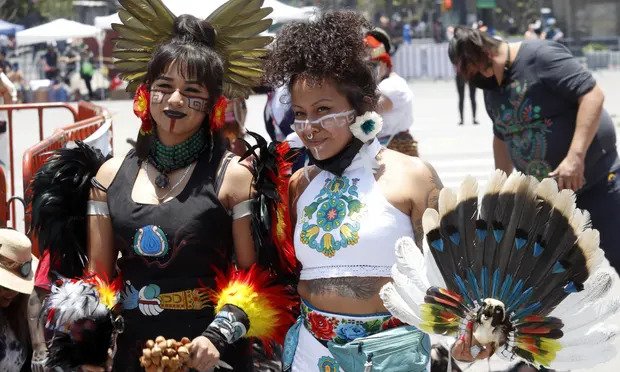 Dancers celebrate the anniversary of the founding of Tenochtitlán, the Mexica capital, on 26 July. Photograph: Luis Barron/Eyepix Group/Pacific Press/REX/Shutterstock
–

David Agren in Tlaxcala @el_reportero
Last modified on 2021 Aug 13
–
When people from the Mexican state of Tlaxcala travel to other parts of the country, they are sometimes insulted as traitors by their compatriots.

Tlaxcala is México’s smallest state in size, but it played an outsized role in México’s early history, not least when indigenous Tlaxcalans allied with Hernán Cortés’ tiny band of invaders to bring down the Aztec empire.

Now, as México marks the 500th anniversary of the fall of the Aztec capital Tenochtitlán on Friday, the role of the Tlaxcalans in the conquest is being reconsidered.

Many historians argue that without the participation of the Tlaxcalans and other indigenous soldiers, Tenochtitlán might never have fallen to the Spanish.

They are also revising the accusation of treachery, arguing that Tlaxcalans and other city states were in fact fighting a war of liberation against the oppressive Mexica (as the Aztecs were known).

“It wasn’t 600 to 800 Spaniards who conquered [Tenochtitlán]. It was thousands and thousands of Tlaxcalans, Huejotzingas and other peoples, who were under the Mexica yoke and wanted to liberate themselves,” archaeologist Eduardo Matos Moctezuma told Radio Formula.

“Cortés had 30,000 to 40,000 Mesoamericans fighting with him,” said Aurelio López Corral, an archaeologist in Tlaxcala. “He couldn’t have done it on his own.”

The conquest is a singular event in Mexican history, seen both as a moment of national trauma and the founding act of the nation – and it remains deeply controversial.

Events to mark the anniversary have been met with tepid enthusiasm, as México struggles with the coronavirus pandemic. A towering replica of the Templo Mayor – the Aztec civilization’s most sacred site – is being erected in México City’s central Zócalo plaza.

President Andrés Manuel López Obrador has called on the Spanish Crown and the Vatican to apologize for their roles in the “so-called conquest”. Spain declined; Pope Francis apologized while visiting Bolivia in 2015.

Cortés himself is still a deeply polarizing figure in Mexican history, a rapacious villain who is also the nation’s founding father: his indigenous translator known as La Malinche gave birth to the first Hispanic Mexican.

In Tlaxcala, however, his role in the fall of the Aztec empire tends to be underplayed, said Yassir Zárate Méndez, who produced a documentary which challenged the official historical treatment of Tlaxcala.

“He is not seen exactly as a villain, unlike in other places, but as someone who played a complicated role in history,” he said. “Cortés goes somewhat unnoticed and remains below the level of local figures.”

Those include Xicohténcatl the Younger, a Tlaxcalan prince who vehemently opposed aligning with the Spanish, and remains fondly remembered in the state.

At the time of the conquest, Tlaxcalans shared a cosmovision with the Mexica and spoke the same language – Nahuátl.

But, unlike the imperial Aztecs, Tlaxcala had a more collective form of leadership, and when Cortés arrived, some in the leadership saw an opportunity to topple an old enemy, said Zárate.

The region provided soldiers for invading the island city of Tenochtitlán and allowed him to regroup after he was forced to flee an Aztec counteroffensive. Cortés reputedly built the boats used for eventually invading the Aztec capital in Tlaxcala.

“It was a question of political survival,” Zárate said. “To save yourself, you had to turn to whatever allies were necessary.”

After the fall of Tenochtitlán, the Tlaxcalans benefited handsomely from their arrangement – and Spaniards married into the local nobility. Tlaxcala received special status in the Spanish colonial period with a form of self-rule. Its residents received the right to settle other parts of the colony.

But when México won independence in the 1820s, that power was lost, and an evolving national mythology focused on the fall of the Mexica, casting Tlaxcalans as traitors.

The National Institute of History and Anthropology (INAH) hosted forums in Tlaxcala in 2019 – 500 years after Cortés arrived in the state – exploring the local role in the conquest. It drew enormous interest, according to organizers.

“There’s a nagging thorn in most Tlaxcalans’ minds [about the conquest] and a sort of anger because the adjective ‘traitor’ has been so strong,” Juan de la Rosa, INAH delegate in Tlaxcala, said in a 2019 interview. “But they have the need to have arguments that explain why they’re not traitors.”