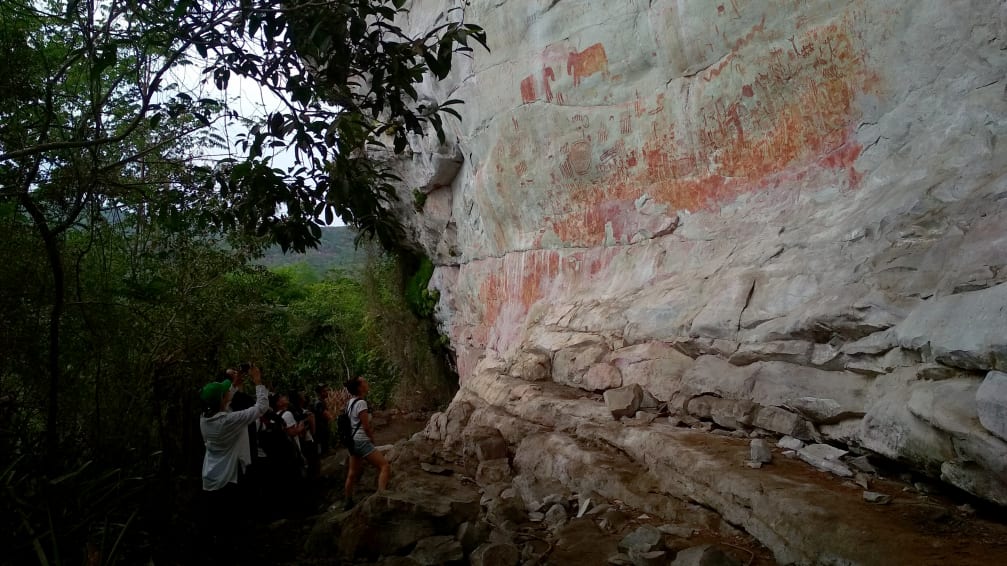 –
Editor’s Note — CNN Travel series often carry sponsorship originating from the countries and regions we profile. However, CNN retains full editorial control over all of its reports. Read the policy.
–
By Lucy Sherriff, CNN •
Last updated 2021 Aug 27
–
(CNN) — For more than 12,500 years, one of the world’s largest collections of prehistoric rock paintings lay undiscovered in Colombia’s Amazonian rainforest.

Depicting now-extinct ice age animals, such as the elephant-like mastodon, stocky ice age horses and giant sloths, the drawings were painted by some of the first humans to ever reach the Amazon.

As groups of hunter-gatherers traversed the globe in search of food, shelter and land, they were confronted by the enormity — and diversity — of the Amazon Rainforest. Researchers have long been perplexed by the decision of early humans to settle in the Amazon basin, due to its harsh environmental conditions and seemingly inhospitable landscape.

The stunning rock art discovery was made in 2017 as part of an expedition named “Last Journey.” Engineered by a British-Colombian archaeological team funded by the European Research Council, the art will take years to study.

The largest animal seen here is a bit of a mystery to Mark Robinson, a UK-based member of the Last Journey team. Other elements of this painting are very likely a sun and a turtle.   Courtesy ERC Last Journey

Spanning nearly eight miles of cliff face, the paintings were kept a secret until they were unveiled by a documentary late last year for the UK’s Channel 4. They are so remote that to get to the rocks, archaeologists had to complete a challenging four-day trek that led to three rock shelters: Cerro Azul, Limoncillos and Cerro Montoya.

José Iriarte, professor of archaeology at Exeter University in the UK, led the expedition to the remote site, alongside Colombian and British researchers.

“We started seeing animals that are now extinct,” Iriarte said in a statement at the time. “The pictures are so natural and so well made that we have few doubts that you’re looking at a horse, for example. The ice-age horse had a wild, heavy face. It’s so detailed, we can even see the horse hair. It’s fascinating.”
–
Related content

13 of the best things to do in Colombia
–

The paintings, located in the Serranía La Lindosa, won’t necessarily provide the answer to why humans decided to settle there, but can certainly give glimpses into an ancient civilization that scientists know little about. “We’re currently undertaking analysis of the images we have been able to document,” said Mark Robinson, a UK-based member of the expedition team.
–
“We’re just finishing up a discussion of the potential megafauna identifications and another manuscript assessing perspectivism and the start of Amazonian artistic traditions.”
–

‘Sistine Chapel of the ancients’

Serranía La Lindosa is located on the riverbank of the Guayabero River, between the departments of Meta and Guaviare.
–
Fish, lizards, birds, dancing people and one figure wearing a bird mask were among the images the team found, which at the time were described as “the Sistine Chapel of the ancients.”
–
The paintings were identified during landscape surveys in 2017, and experts named the shelters following the discovery. The art depicts geometric shapes, handprints and people interacting with plants, trees and savannah animals, leading the team to believe that the Amazon may not have always been a rainforest.
–
Additionally, there are drawings of deer, tapirs, alligators, bats, monkeys, turtles, serpents and porcupines, as well as what appears to be Ice Age megafauna. These now-extinct animals are depicted in rock art in Central Brazil, but experts believe these drawings are more realistic.
–
Related content

The paintings have been so well preserved, at least for the past half century, due to the region being under the control of FARC, Colombia’s largest rebel group. For years, the country was embroiled in a civil war, with many areas completely off limits as they were controlled by guerrillas.
–

Many areas in the country opened up following the peace agreement made between FARC, which stands for Fuerzas Armadas Revolucionarias de Colombia (the Revolutionary Armed Forces of Colombia), and the Colombian government in 2016.
–The rock art, dating back some 12,500 years, is in a remote area of Colombia.  Courtesy ERC Last Journey

Even after the 2016 peace process, the team had to negotiate with rebel leaders in order to enter safely during their 2017 expedition.
–
The placement of some of the drawings, which are reddish-ochre in color, baffled the expedition; some were so high on the cliff walls they could only be viewed with drones. –

The site, which has yet to be named, isn’t the first in the country to have wowed archaeologists with prehistoric paintings. Chiribiquete National Park, the largest protected area in Colombia, is home to 75,000 paintings of hunting scenes, battles, dances and ceremonies, across 60 rock shelters — and dating back to 20,000 BCE.
–The central image in this painting is “such a bizarre one,” researcher Mark Robinson said. The figure is in a stance typical of dancing, or more commonly with monkeys, Robinson said. The tiny figures around it are monkeys, he said.  Courtesy ERC Last Journey

Rock art is notoriously difficult to date, but adjacent materials, such as the tools that were used to create the images were tested to date the site. Researchers have also identified animals that are now extinct, which helps with the dating process. –

The Serranía La Lindosa excavations, in the deep soil around the shelters, have revealed one of the earliest dates for the occupation of the Colombian Amazon.
–
“For Amazonian people, non-humans like animals and plants have souls, and they communicate and engage with people through rituals and shamanic practices,” Iriate said, speaking of the recent discovery. “These earliest Amazonian artists’ expressions likely represent the origins of this distinct relationship.”
–
Related content

This river turns into a spectacular ‘liquid rainbow’

–
Returning to the area is a “distant reality” at the moment due to the ongoing coronavirus pandemic, explained Robinson, a professor at the University of Exeter. However, the team remains hopeful it can return in 2022.
–
Robinson hopes that an in-person symposium about rock art sites, similar to one the university hosted online this year, will be held in Colombia next year, but the event is Covid-dependent.
–
Although the public cannot yet visit the Serranía La Lindosa sites, there are other ways to explore Colombian rock art.

Researchers believe this figure, located high on a rock face, could be a Macrauchenia, a now-extinct genus related to the llama.  Courtesy ERC Last Journey

–
Chiribiquete National Park is essentially the gateway to the Serranía La Lindosa, and ancient rock art was found here in 2014.
–
Even this park is difficult to visit, however; the Colombian photographer who made the discovery filmed these paintings from a helicopter. The park is so protected — because it houses these culturally and historically important paintings, as well as a wealth of wildlife — that most of the areas are off limits to tourists. However, if you can afford it, there are companies offering hour-long helicopter rides over the park, departing from the nearest city of San José del Guaviare.
–
A much easier, and more environmentally friendly, way of learning about pre-Colombian culture is to visit Bogotá’s Museo de Oro — the Gold Museum — which covers two floors and contains more than 55,000 pieces of gold, many of them made by the country’s indigenous communities, many with ties to the legend of El Dorado.
–
Another option, also in Bogotá, is Museo Nacional — the National Museum — which is one of the first museums in the Americas, and has artifacts from 10,000 BC.
–

(For the source of this, and many other equally intriguing and important articles, please visit: https://www.cnn.com/travel/article/rock-art-serrania-la-lindosa-colombia-last-journey-scn/index.html)