Neither actor nor Blue Origin has commented on mission as some point out report appears same day as promotion for his new album.

He was once Starfleet’s youngest captain, a fearless explorer leading the USS Enterprise on an intergalactic odyssey. Now the actor who famously portrayed Captain James Tiberius Kirk on Star Trek for four decades is reportedly set to boldly go on a real-life space adventure – at the age of 90.

According to TMZ, William Shatner will blast off from Earth next month aboard a Blue Origin capsule owned by the Amazon founder Jezz Bezos, with the 15-minute joyride being filmed for a documentary.

Shatner’s mission, however, appears shrouded in secrecy, with neither the actor nor Blue Origin commenting. Cynics point out that the TMZ report appeared on the same day Shatner sent tweets about his new album, Bill, which is described as an autobiographical journey in “poetry and prose, music, spoken word, performance art and philosophical exploration”.

If the flight takes place, Shatner would become the oldest person to go into space, surpassing Wally Funk, a former test pilot who was 82 when in July she joined Bezos and two others aboard Blue Origin’s first crewed suborbital flight, 66.5 miles (107km) into space. Bezos hailed the achievement as “the best day ever”.

Shatner’s team has, according to TMZ, been in discussions about a spaceflight for a while, with a partnership with Discovery reportedly falling through. The October flight, TMZ said, will happen with new partners.

The episode is also likely to fuel further speculation about the identity of the top bidder in Bezos’s June auction for a seat on his first flight. The anonymous winner paid $28m, then pulled out due to an unspecified “scheduling conflict” and was replaced by 18-year-old Oliver Daemen of the Netherlands. His seat was purchased by his investment manager father, for an undisclosed sum.

Shatner, a prolific Twitter user with 2.4m followers, has made no secret of his desire to experience space travel. In May 2020, as a Bezos competitor, Elon Musk’s SpaceX, was returning humans to orbit from US soil for the first time in nine years following the retirement of the space shuttle, he posted a tweet of himself in an astronaut’s helmet with the words: “BTW Nasa, just in case; the suit does fit!”

Two months later, while moderating a debate on the future of human spaceflight at Comic-Con in San Diego, Shatner hinted that he would soon make a short private journey on an up-and-down flight such as that provided by Blue Origin. According to space.com, he also expressed concerns about the risks of space travel.

Shatner, who is Canadian, has enjoyed a long association with NASA, during and after his years playing Kirk in Star Trek.

In 1976 he narrated a short film, Universe, and he has worked on other video projects since, including a 2011 documentary about the space shuttle, the 100th anniversary celebration of NASA’s Langley research center in 2017 and a promotion of the Parker solar probe the following year.

Back to top© 2021 Guardian News & Media Limited or its affiliated companies. All rights reserved. (modern) 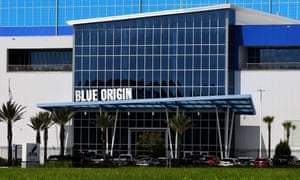 ‘American democracy will continue to be tested’ Peril author Robert Costa on Trump, the big lie and 2024 3h ago

Marina Abramović ‘I think about dying every day’ 20h ago

It’s No Time to Die But is it time to revoke James Bond’s licence to kill? 24h ago


(For the source of this, and many other equally intriguing and important articles, please visit: https://www.theguardian.com/culture/2021/sep/25/william-shatner-space-bezos-blue-origin-star-trek/)