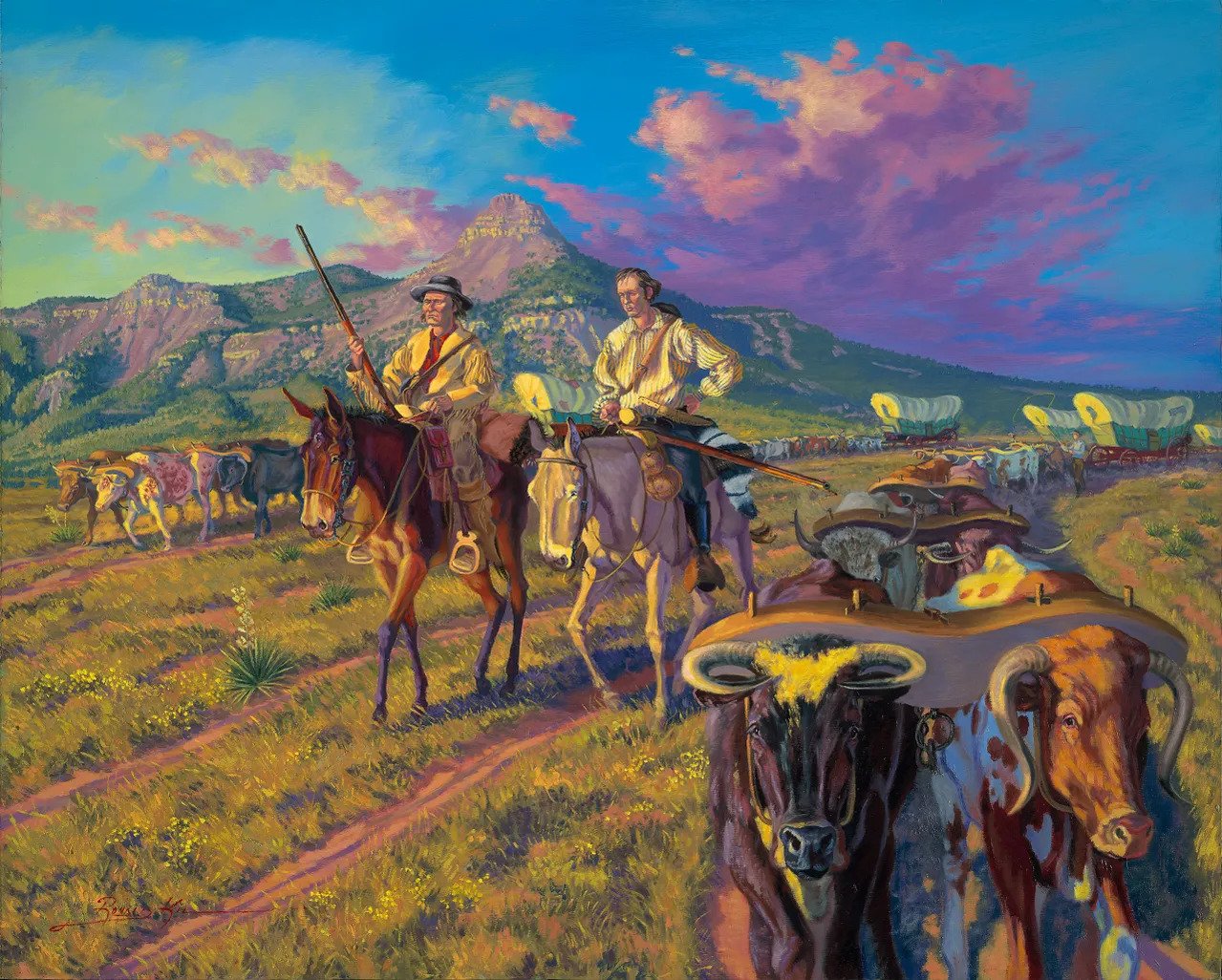 In 1821, the Santa Fe Trail was opened as a commercial route between Missouri and New Mexico by William Becknell and his party of five traders.  The famous “Commerce of the Prairies” developed and grew until the railroad reached Santa Fe in 1880.  The Trail was a route of conquest during the war with México, 1846-1848, was the scene of significant Civil War actions, 1861-1865, and was in the middle of the Indian Wars of the 1860s and 1870s.  It provided a path for the settlement and change of part of the territory of the Louisiana Purchase.  Considered the most important commercial route across the Great Plains during the 19th Century, the Trail brought together a diverse mix of cultural groups.  The Santa Fe Trail 200th is a commemoration of a living part of the American experience connecting people in commerce, conflict and culture.  Today, the Santa Fe Trail remains crucial to American history in its many forms and provides an opportunity for education, engagement, awareness, exploration and discovery.

The Santa Fe Trail Association expresses thanks to Bill Kurtis for help creating this informational message.
–

Get out there: Explore the Santa Fe Trail!

Missouri is rich in history and culture. The site of Franklin is north of the Missouri River and about 0.5 mile west of the Boonville bridge on Missouri Highway 87.

At Dodge City the Trail split into two other major routes. The Mountain Route continued west from Dodge City to La Junta, Colorado. Near Bent’s Fort it turned south-southwest to Trinidad, over Ratón Pass and on into New Mexico and the end of the trail, the Plaza in Santa Fe.

The smallest portion of the Santa Fe Trail was in Oklahoma. Of the two major trail branches, only the Cimarrón Route crossed into the state through the western portion of the Oklahoma panhandle, in modern Cimarrón County.

Today, you can travel the Santa Fe Trail Scenic byway, which follows the original trail very closely. On a clear day, you can still see wagon wheel ruts cutting across the prairie. It covers 188 miles from the Kansas border, through Colorado, to the Nuevo México border.

The New Mexico Santa Fe Trail National Scenic Byway invites you to visit sites important to the history of the Trail and of communities in Northeast Nuevo México.

To help you explore the Santa Fe Trail, we recommend the following:

The Santa Fe Trail:  A Guide by Hal Jackson and Marc Simmons

–
–
–
(For the source of this story, and other information about the Santa Fe Trail, please visit: https://santafetrail200.org/)