Demonstrators in the US must fear not only police brutality but also rightwing vigilantes. 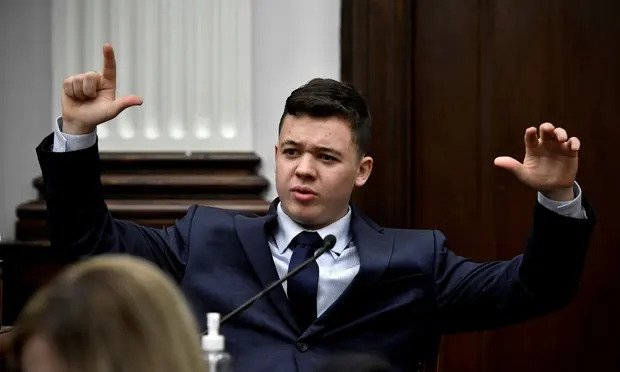 ‘Kyle Rittenhouse has just been acquitted after literally killing two people and injuring a third at a protest.’ Photograph: Reuters
–

Kyle Rittenhouse – the armed white teenager whose mother drove him from Illinois to Wisconsin to allegedly “protect” local businesses from anti-racism protesters in Kenosha, whereupon he shot and killed two people and injured another – has been acquitted of all charges. I don’t think anyone who has followed the trial even casually will be surprised by this verdict. After the various antics by the elected judge, which seemed to indicate where his sympathies lay, and the fact that the prosecution asked the jurors to consider charges lesser than murder, the writing was on the wall.

I do not want to discuss the legal particulars of the verdict. It is clear that the prosecution made many mistakes and got little to no leeway from the judge, unlike the defense team. Moreover, we know that “self-defense” – often better known as vigilantism – is legally protected and highly racialized in this country. Think of the acquittal of George Zimmerman of the killing of Trayvon Martin in 2013.

In essence, the Rittenhouse ruling has created a kind of ‘stand your ground’ law for the whole country

In essence, the Rittenhouse ruling has created a kind of “stand your ground” law for the whole country. White people now have the apparent right to travel around the country, heavily armed, and use violence to protect the country from whatever and whoever they believe to be threatening to it. Given the feverish paranoia and racism that has captured a sizeable minority of white people in the US these days, this is a recipe for disaster.

In the coming hours and days, many media outlets will eagerly await riots or other potentially violent reactions from the other side – from the anti-racists and progressives of all colors and races who are disturbed by this verdict – and use the existence of those riots, if they occur, to push a misguided “both sides” frame. If there is protest or rioting, don’t expect the police to be as courteous and supportive as they were towards Rittenhouse and his far-right buddies.

The most worrying effect of this verdict may be this: giving rightwing vigilantes a legal precedent to take up arms against anyone they consider a threat – which pretty much runs from anti-fascists to so-called Rinos (Republicans in Name Only) and includes almost all people of color – means it is now open hunting season on progressive protesters.

Don’t get me wrong; this ruling alone did not start this kind of lopsided law and order. It is just the latest in a centuries-old American tradition of protecting white terror and vigilantism. Civil rights demonstrations in the 1960s, particularly but not exclusively in the south, were not just denied police protection; the demonstrators were attacked and abused by the police. That was also the case at many Black Lives Matter demonstrations last year.

A Boston Globe investigation found that “between [George] Floyd’s death on 25 May 2020 and 30 September 2021, vehicles drove into protests at least 139 times”, injuring at least 100 people. In fewer than half of the cases the driver was charged, and only four drivers have been convicted of a felony. Moreover, in response to these attacks, Republican legislators have proposed laws to protect the drivers from legal action in case they hit a protester. Florida, Iowa, and Oklahoma have already passed such laws.

It takes courage to publicly protest in any situation, particularly when protesting state powers. Now protesters in the US will have to fear not only police brutality but an emboldened and violent far right, fired up by the Republican party and the broader rightwing media and protected by the local legal system.

All of this comes at a crucial point in US democracy. From Georgia to Wisconsin, the Republican party is attacking the electoral system, while their supporters are terrorizing poll workers and those signing up to be poll workers in the next elections. In the event that Democrats win important elections in conservative states in 2022 – think Stacey Abrams in Georgia or Beto O’Rourke in Texas – there is a big chance that these results will be contested and judged by highly partisan forces protected by state politicians.

Similarly, should President Biden or another Democrat win the 2024 presidential election, the result will again be challenged in conservative states, but this time independent poll workers could be absent or outnumbered and the few Republicans who withstood Donald Trump’s pressure in 2020 will have been replaced or have fallen in line.

At that point, Democrats, and indeed all democratic-minded citizens, will have to go into the streets to protest. They will confront an alliance of heavily armed civilians and police and national guard, who can attack protesters with effective immunity. Remember: Kyle Rittenhouse has just been acquitted after killing two people and injuring a third at a protest.

In my home country, the Netherlands, we have a saying that is used regularly in political discussions: “Democracy is not for scared people.” Most of the time when it is used, we mean that democracy is not for people who are afraid of change or of critique. In the US, in the wake of today’s verdict, this saying has become both more real and more sinister.